Fighting Fascism – the war with the Left for America’s Soul 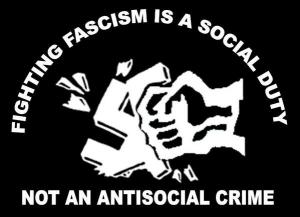 Leftists declare anything they want to be illegal including free speech.  They say hate speech is not protected speech and use violence to squash any speech with which they disagree by labelling it hate speech.

This was a Tweet sent out by a former presidential candidate.  That statement is absolutely false!  In America, you are free to say anything you want against anyone you want be it racist, anti-Semite, anti-Christian, or anti-government.  What is not protected is speech that incites violence.  You can say you hate n*ggers, or spicks, or ragheads, or kikes, or bible-thumping rednecks, but you cannot say go out and kill them!  You can say Obama should have been hanged for his treason, but you cannot say you want to assassinate him.  You can say you wish Trump would die, but when you say someone should kill him then you have committed a crime by calling for the assassination of the President.  This fact is completely lost on the Left who believe they have a right to silence, even kill, anyone who says anything with which they disagree.  They say they are silencing fascism, but what they are doing is promoting fascism against the Constitution.

THE CLENCHED FIST OF TRUTH!

Trump’s Wall a ‘Symbol of Hate’

The upcoming election in France is a reflection of America’s elections.  The globalist, commie fascist, leftwing elitists portray themselves as normal centrists and they depict the normal, common sense, rightwing free peoples as “extremist hateful bigots.”  Globalists import foreign cheap labor to replace their citizenry who want to be upwardly mobile in their wages.  Cities become havens for illegal immigrants work for the rich while living in public housing being subsidized by the Middle Class taxpayers.  The Middle Class ends up in the ‘burbs where businesses are closed because all the wealth is being soaked up in taxes to pay for the elite’s serfs.  Then they say it is the “extremist hateful bigots” who are stealing all the wealth to scapegoat the Right in the eyes of the ignorant.  This is the same as the Democrat Party in America and leftist socialist fascism around the world.

This is why the Democrat Party has rejected the white working class that was once their base in favor of minorities, immigrants, the immoral and illegals to whom they give the right to vote.  That is how New York and California gave Hillary the “popular vote.”  Had America been a democracy like France without the Electoral College to squash stuffing the ballot box with fraudulent votes then Hillary would be president today and America would fall.  The TEA Party recognizes these truths.  Conservatism is built on the foundation of the Constitution and liberty while liberalism is born of ignorance and bred on immorality.  The Left is devoted to enslaving the populace to serve the elites and they are doing it by duping the people into believing that that is their opponent’s intent.  Because most people pay no attention to what their government representatives actually do, but are inundated with leftist lies in media propaganda, America’s masses are hoodwinked as the Left steals away their wealth and their freedom.  Their latest ploy is to silence the people’s moral voice by violent, fascist terrorism on college campuses, by jihadis murdering people in the streets, and by accusing good, honest, effective conservative speakers with lies of sexual harassment.  These deceptions will come to light as a ploy rather than the truth as do all things liberals do.

The solution to this is two-fold; One) Never vote Democrat and always vote Republican even if you don’t like your Republican representative.  If you don’t like your Republican then get involved in the primaries and elect a better Republican.  Better to break a few eggs than to jump out of the frying pan into the fire.  Two) Educate other people.  Only people who are ignorant support the Left.  If they are willfully ignorant, like white male working veterans who vote Democrat, you can’t help them.  They are like suicides.  If they want to shoot themselves in the head or jump off a building you can’t stop them.  It is not illegal to commit suicide, but it is illegal to attempt suicide.  Unfortunately, it’s not illegal to vote stupidly and it can be noted that Republicans really screwed up when they passed the 15th Amendment giving every idiot that can draw a breath the right to vote.  The 20th century screw up was Teddy Roosevelt splitting the Republican vote in 1912 giving Democrats their first real power since the Founding.  The Democrat Party is dedicated to stealing America’s wealth and tearing her apart and they will use any illegal means to do so by corrupting those who stand with them.  Those who are part of the party apparatus to pull the wool over the eyes of the people are not people with whom Republicans should be willing to “reach across the aisle” to work with, but are people who should be fought by every means available.  Now Democrats show their true nature as they have become the party of the America hating foreigners and there are no Americans who vote for them who can call themselves patriots, which is why they so despise patriots.

The Dutch came up short of electing a patriot to save their country from the foreign invasion of Islamists.  The British have chosen wisely, but now must go to battle to free their country.  America is embattled with her first truly American president trying to rein in Congress.  France is next to prove whether her people understand they need to save themselves or if they will choose to jump into the noose until they hit the end of their rope.  Their two remaining candidates are the far leftist posing as a centrist and the rightwing candidate who would save their nation from the globalist elites that would make it another Islamic cesspool.

Millennials are lost in the wilderness of Democrat media propaganda

This site is my opinion only and is unpaid. I am a retired Paramedic/Firefighter with 25 years of service in the City of Dallas Fire Dept. I have a B.A. degree in Journalism, and A.A. degrees in Military Science and History. I have spent my life studying military history, world history, American history, science, current events, and politics making me a qualified PhD, Senior Fellow of the Limbaugh Institute, and tenured Professor Emeritus for Advanced Conservative Studies. 😄 It is my hope that readers can gain some knowledge and wisdom from my articles.
View all posts by dustyk103 →
This entry was posted in Politics and tagged American Nazis, Conservatism, Democratic socialism, Democrats, Fascism, French Election, Globalists, Leftist ideology, Leftwing propaganda, Liberalism, Progressives, Republicans, Social Justice, Socialists, Trumpism, Washington elites. Bookmark the permalink.