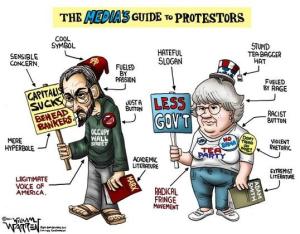 In 2012 I thought America would wake up to what Democrats are after four years of Obama wrecking America, but I was wrong.  It took setting the world on fire for people to wake up.  Democrats thought they could win between conning minorities and stuffing the ballot box as leftists always do.  (What?  You think Chavez and Saddam actually got 98% of the vote?)  Now Democrats want to clone the TEA Party movement for themselves to recover their catastrophic loss of power.  They already manufactured their clones in Occupy Wall Street and Black Lives Matter.  But clones built on lies have no substance.

The TEA Party is not an organization.  We are patriotic Americans who love this country and saw how the Left was striving to tear it apart so they could recreate it in their image as a socialist banana republic with themselves in charge.  Their plan – to enlist America-hating minorities and use voter fraud to stuff the ballot boxes just failed epically!  Americans just elected an American son with the brilliance and the drive to tear down the constructs of the Left and bring about an American renaissance.

Donald Trump is already proving the reason he became a billionaire.  His genius may be somewhat concealed behind his bombastic personality, but no one ever said that an economic genius is never crude, rude, lewd, or socially unacceptable.  Bill Clinton was a rapist and serial molester, but women of the Democrat Party had no problem with him, or his wife – the most cheated on woman in America – whose corruption ran to the core.  Trump is representing American values and instituting American policies that the TEA Party thought they would get electing Republicans, but did not.

Democrats have invested in minority groups that hate America leaving all Americans only one place to go – and Donald Trump filled the vacuum that has been left by corrupt Washington elites.  Cleaning house, stopping voter fraud, and beating down propaganda will be a full time job.  But the dynamo that is Donald Trump can not only do that, but he can rebuild America and make advances toward great American achievements at the same time.  He has already done more for America’s economy on his first weekend in office than Obama did in eight years.  Leftwing propaganda aside, America’s stagnation and decline are being reversed, and Democrats are furious!

What it will take to recover America

This site is my opinion only and is unpaid. I am a retired Paramedic/Firefighter with 25 years of service in the City of Dallas Fire Dept. I have a B.A. degree in Journalism, and A.A. degrees in Military Science and History. I have spent my life studying military history, world history, American history, science, current events, and politics making me a qualified PhD, Senior Fellow of the Limbaugh Institute, and tenured Professor for Advanced Conservative Studies. 😄 It is my hope that readers can gain some knowledge and wisdom from my articles.
View all posts by dustyk103 →
This entry was posted in Politics and tagged American Renaissance, Black lives matter, Capitalism, Democrats, Democrats vs. Republicans, Donald Trump, Government corruption, Occupy Wall Street, Republicans, Socialism, TEA Party. Bookmark the permalink.

1 Response to Ending the Democrat hegemony