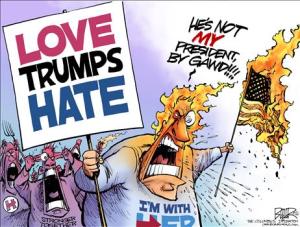 “Obviously, when people look at the flag and say, ‘That’s not my flag, Donald Trump is not my president,’ then you know what, then obviously this ain’t your damn country!  LEAVE!

Conservatives have had to accept that Americans chose a Moslem socialist Hitler wannabe to be President of the United States and Leader of the Free World for the last eight years.  We’ve had to watch as he wrecked the American economy, stole the Middle Class’s prosperity, illegally imported anti-Americans to steal American jobs and give away America’s wealth, and invited Islamists to come to America to impose Sharia on the infidels.  The leftist ideology of making America the world instead of making the world America is what has driven this revolution to overturn the Obama legacy of destroying the Great Satan by electing a complete Washington outsider.

Dionne Alexander lays it out

The Left has proven itself and is on display for all the world to see that they are the ideology of hate, support dictatorship, and despise freedom.  They will use any means of fulfilling their greed and satiating their envy either by hook or by crook, and when that fails they resort to violence.  If they can’t make you believe in giving it to them, and they can’t take it by law, then they’ll take it by force.

This is why it is not about Republican vs. Democrat, or conservative vs. liberal, or just Right vs. Left – it’s about the righteous vs. the wicked, about right vs. wrong.  The difference between God and Satan is that when God doesn’t get his way he forgives.  When Satan doesn’t get his way he destroys.  It’s the difference between Christianity that asks you to choose what is right, and Islam that forces you to submit.

Liberal’s dysfunctional thinking leads them via backwards thinking to devise false premises causing them to arrive at erroneous conclusions.  That’s how they justify wickedness as being morally righteous.  Their lack of a moral compass comes from a lack of education in morality and ethics that leftists in schools warp to induce these wrongheaded thought processes.  It is up to the Christians in America to educate them and lead the nation back to the Light of Truth and away from the darkness and despair to which the Left has driven them.  The Left’s doom and gloom unless they are in charge and given all the wealth has corrupted people’s minds to the point of hopelessness that patriotic Christian Americans hope and pray Trump can restore. 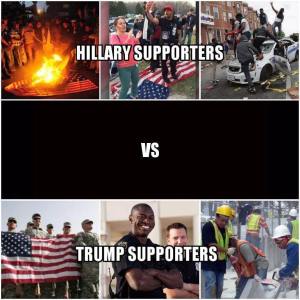 What a Trump presidency means to America’s future

Baby survives being shot by parents over global warming suicide

This site is my opinion only and is unpaid. I am a retired Paramedic/Firefighter with 25 years of service in the City of Dallas Fire Dept. I have a B.A. degree in Journalism, and A.A. degrees in Military Science and History. I have spent my life studying military history, world history, American history, science, current events, and politics making me a qualified PhD, Senior Fellow of the Limbaugh Institute, and tenured Professor for Advanced Conservative Studies. 😄 It is my hope that readers can gain some knowledge and wisdom from my articles.
View all posts by dustyk103 →
This entry was posted in Election 2016, Politics and tagged Donald Trump, Left vs. Right, Leftist ideology, Obama's America, Patriotism, Terrorism, Trump's America. Bookmark the permalink.