Democrat socialists got shafted as GOP got b*tch slapped 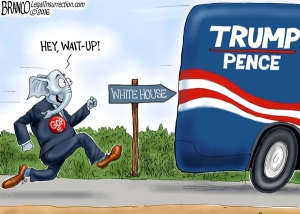 Draining the swamp will not be easy.

On Nov. 8th, sixty million people voted for the corrupt Washington elites to be brought down, while another sixty million votes were cast in support of that corruption.  Hillary won the popular vote thanks to Democrat voter fraud, but the Electoral College served its purpose and thwarted Obama’s Democrats.  Donald Trump is now President-elect and the GOP that stood against him now has more power than they’ve had in a century.  But they got that power because the people elected a true outsider to upset their sandbox.  America jumped on the Trump Train to derail the GOP/DNC gravy train that is draining America’s wealth and the GOP establishment is as unhappy with that as their DNC counterparts.  The people and those who truly represent them, however, are all aboard and unwilling to put up with D.C. corruption.

Leftists want to overturn the Electoral College and make the election about the popular vote they say Hillary won by a thousand votes out of 120 million.  The only reason she won the popular vote is because of Democrat voter fraud where illegals, felons, dead people, and Democrat pollsters that filled out absentee ballots for people who didn’t show up and cast out Republican votes.  The reason she lost is because the college is designed to restrict voter fraud by corrupt state officials stuffing the ballot box.  Hillary won those votes in states that allowed the most corruption like New York, Illinois, and California, but she lost the blue states where she campaigned because Republican governors kept the voter fraudsters from perpetrating their crimes.

The leftwingnut Democrat media propagandists are already trying to color Donald Trump black in the eyes of those who voted for him claiming he is packing his administration with GOP establishment types.  There are many great conservatives in Washington who have been fighting the corruption and those are the people who are filling Trump’s transition team that is now being headed by his outstanding VP-elect, conservative Mike Pence.  His choice of Reince Priebus as Chief of Staff is not a betrayal as Reince has been on board and unwavering in his dedication to the people’s choice from the beginning.  The next few days, and following years, will be nothing but liberal bile unloaded at Trump on a daily basis just as they did to Bush.  Their heathens are slinging rocks at police in their rage and their intelligentsia will be slinging mud at conservatives.  The war for America’s soul isn’t over.  The battle has just been rejoined with the first overwhelmingly decisive victory by Christian conservatives in over a century.

The war with the Left has had some victories in the last century since Teddy Roosevelt foolishly split the Republican ticket and handed Democrats complete power in 1912 after they lost it all in the Civil War.  Since then the electorate has been corrupted by propaganda, pandering, and election rigging by Democrats who stuffed blacks and immigrants into ghettos forcing them to vote Democrat with a gun to their heads.  NeverTrumpers and those who turned on Trump because of Democrat propaganda smears should not expect to be rescued by The Donald.  Sen. Kelly Ayotte (R-NH) lost both her state and her seat by going against Trump.  Trump has no reason to rescue her from her stupidity for the establishment.  Now, with a man who is completely on the side of the people because he comes from them and not from Washington elitists, there is a chance to set the ship upright.  There is no reason for those who were not on board to keep them afloat to share the ride when they won’t stand with the people.

What a Trump presidency means to America’s future

Who should be in Trump’s Cabinet

This site is my opinion only and is unpaid. I am a retired Paramedic/Firefighter with 25 years of service in the City of Dallas Fire Dept. I have a B.A. degree in Journalism, and A.A. degrees in Military Science and History. I have spent my life studying military history, world history, American history, science, current events, and politics making me a qualified PhD, Senior Fellow of the Limbaugh Institute, and tenured Professor for Advanced Conservative Studies. 😄 It is my hope that readers can gain some knowledge and wisdom from my articles.
View all posts by dustyk103 →
This entry was posted in Election 2016 and tagged Donald Trump, GOP, Presidential Election 2016, Republicans, Trump presidency, Trump vs. Washington, Trump's GOP, Washington elites. Bookmark the permalink.