Liberal media smears of Trump are taking their toll on women who are being told Trump is unfit to be president even as they cover up Hillary’s corruption.

Working for the Hillary campaign to promote their propaganda, leftwing media is portraying Donald Trump as not having the temperament to be president.  They distort everything he says, does, and has done as being unhinged and erratic.  Here’s a simple truth – you don’t build a billion dollar empire by being incompetent in any way.  Trump has proven leadership skills both in his business and in his family shown in the quality of his children that he has raised.  He has far greater success than Hillary or Obama in that he didn’t just convince a bunch of fools to vote for him in a popularity contest, but made deals with very wealthy people to invest in his businesses.  Donald Trump is being portrayed by liberal media propagandists as being unstable and Hillary as being honest – both absolute lies that are the complete opposites of reality. 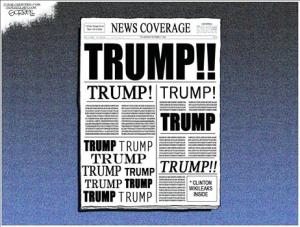 While the leftwing media focuses only on the 1% of his businesses that failed, they make certain that the failures and corruptions of Obama and Hillary are kept out of the public’s eye.  Hillary and her media collaborators have no campaign to improve America except to smear Trump while she adheres to Obama’s hope and change that proved to be an utter lie.  ObamaCare is imploding as the world is exploding.  The people’s hope died with Obama’s change converting America from a nation of dreamers into a nation of schemers.  The plot to infiltrate America with illegals and Moslems to corrupt American culture has been proving a great success.  Half the white people, especially women, are supporting them to “help the helpless.”  These “helpless refugees” are not only taking American jobs, but subverting American culture calling for Christianity to be abolished and Sharia put in its place.  Talk about the stupidity of the America voter…

Democrats saying America is a nation of immigrants is as big a lie as saying your family is a house of adopted children.  When you moved into your home and began your family you didn’t build that family by letting people break into your home and taking up residence with you.  America allows over a million immigrants to enter the country legally each year, but Democrats allow another million to steal across the border illegally each year.  They even help them get across, set up places for them to live, and then give them taxpayer benefits that were supposed to be for citizens and the elderly.

While Hillary is ready to submit to Islam, Trump stands up to fight the evil that is spreading around the world.  It is not intemperate to fight evil, but to endorse it as Hillary does.  Democrats pulled this same stunt on Reagan back when he ran against Carter that he was an old nutjob who would start a nuclear war.  What Reagan did was end the Cold War and break Soviet domination of Eastern Europe.  Obama and Hillary are already leading America to war with Russia by siding with Islamo-Nazis.  They claim Trump would ally with Russia against – whom exactly?  Allying with Russia to destroy the New Jihad that Obama and Hillary have unleashed on the world is certainly not the actions of someone who is “intemperate.”  Nothing would be more sensible than crushing the barbarian savages breaking through the gates into civilized lands.

[Author’s note: Donald Trump may be immature as a politician, but he says what he thinks honestly.  Hillary may be a polished politician, but she smears Trump with more sewage talk than Trump ever used against anyone else, and then she lies about everything she wants to accomplish.  America already fell for every lie Obama ever told and now we are paying the price in lost jobs, a weak military, and riots in the streets.  Trump is not devious, but he is extremely successful, while Hillary is completely devious and everything she touches, like Obama, turns into a disaster from which she profits.]

No place in Trump’s America

This site is my opinion only and is unpaid. I am a retired Paramedic/Firefighter with 25 years of service in the City of Dallas Fire Dept. I have a B.A. degree in Journalism, and A.A. degrees in Military Science and History. I have spent my life studying military history, world history, American history, science, current events, and politics making me a qualified PhD, Senior Fellow of the Limbaugh Institute, and tenured Professor for Advanced Conservative Studies. 😄 It is my hope that readers can gain some knowledge and wisdom from my articles.
View all posts by dustyk103 →
This entry was posted in Election 2016 and tagged 2016 Presidential Campaign, Donald Trump, Hillary Clinton, Hillary's America, Trump's America. Bookmark the permalink.