Black lives won’t matter until they matter to black people

BLM declaring they want to save black lives by eliminating racist white cops is a black lie straight from the black hearts of leftists! They are not fighting racism; they are perpetrating it against whites. They are not fighting for justice; they are trying to deconstruct America to remake her in their own evil image. 99% of blacks are murdered by other blacks. 99% of blacks killed by cops are shot for being violent criminals. They don’t care about black lives taken 99.99% of the time by their own actions. They are just exercising their belief in black supremacy to condemn all white people for the extremely rare murder of an innocent black by a racist white person that happens .01% of the time.

To make their lives even worse, they are not fighting for justice over those like George Floyd who were actually murdered by a racist cop. They fight for criminals like Michael Brown who was shot while trying to murder a cop. Blacks are not gunned down indiscriminately by racist police all the time. It hardly ever happens. If what they claim was true, then there would be a multitude of videos and prosecutions as in the George Floyd case. But that was a case of a Democrat cop in a Democrat city in a Democrat state where they hold absolute power. Except these cops to get away with murder so that Democrats can cause a greater uprising and blame Trump. The worst of it is that they are following leftwing communist Nazis of the Democrat Party to destroy America rather than actually seek justice.

We are in the throes of a Cultural Revolution

Democrats don’t care to solve any problems in black communities. They just want to use those problems for campaign issues. Blacks people are not savvy enough to realize they are dupes being played by the DNC. That’s why their lives are getting worse rather than better. White people do not need to “unlearn their racism.” They have done so over the last fifty years. It is black people who have learned to be racist, to scorn working for or with white people. The blood on the streets of Chicago and New York is not spilled by white people. Democrats are not importing uneducated, unskilled illegals to “do jobs that Americans won’t do.” They are importing them to do jobs that uneducated, unskilled blacks won’t do.

Minorities have been taught by Democrats that they are victims whose prosperity has been stolen from them by greedy, white Republicans, rather than that they can educate themselves to be prosperous. It is blacks who need to unlearn their racism as taught to them by Democrats. Democrats appeal to the basest emotions in all people encouraging everyone who has a grievance because somebody was mean to them, that they have a right to revenge. They instill envy, greed, and hate in people’s hearts promising to be their

avengers when all they are doing is thieving on their behalf and empowering criminals by weakening the police.

This glorification of criminals is why blacks, who only make up 12% of the population, account for 50% of the violent criminals. They’re not in prison because they are poor or because the system is racist. Cops do not focus on them because they are racist. They do not get shot disproportionately because others are racist. They act as they do because they have been taught to be racist against white people. They have been taught they have a right to be a$$holes. Democrats have indoctrinated them into believing that education is for white people who only want to make them servants, and their only recourse is to steal rather than work.

Democrats deliberately use inflammatory language to twist facts in order to corrupt the hearts and minds of the ignorant. This is how leftist demagoguery works. They slander others with lies to smear them in the eyes of fools who believe whatever they are told without reading past a headline. Biden saying that blacks who don’t vote Democrat are not black is speaking as a white owner demanding the obeisance of his black welfare voter slaves, not as a righteous representative. Democrats destroying historical monuments to Democrats are trying to hide their past so that they can deceive people of their modern

ideology of 21st century propaganda slavery. Sports teams now protesting against America are indicative of just how deeply this leftist corruption has been ingrained into our culture.

Leftists who say blacks can’t be racist are deceivers, and the liberals who parrot them are the galactically stupid. Likewise, their declaration that any white person born in the USA lives under white privilege as a white supremacist while exempting themselves is supreme bigotry. What percentage of blacks approve of criminals? Like the Moslems who approve of jihadis it is not a low number. Young black men are ten times more likely to be violent criminals than any other demographic group. Is that what they are most proud of being? Is this superior to working with white people? The poor, miseducated fools are serving white people. They are serving their white, elitist Democrat masters as welfare voter slaves promoted by lying, leftwing, commie fascists. This isn’t rebelliousness against tyranny. It is black supremacy slavery serving elitist, white, anti-Christian, anti-American socialists.

The Democratic Nazi Communist Party of socialist, anti-Christian America haters is so rife with lies and subversives that the sabotage of the nation’s economy can be laid at their feet. They are happy to let the masses of those they rule suffer if they can coerce them into returning them to power. This plague of Covid-19 has been a lie from the start. The shutdown was Trump’s only great error in dealing with Democrats. The true death toll of this is far less than the 125,000 they say. When we have doctors, nurses, and some administrators confessing that those who died from other causes like car wrecks and shootings, and whose corpses tested positive for Coronavirus, were declared Covid deaths, 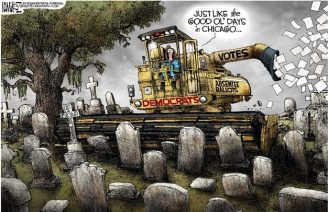 we have the truth of their lies. That they encourage rioters to be out congregating while demonizing citizens to stay under quarantine is all the proof you need of this truth.

This chaos will never end. If Democrats are given power, they will make everyone’s lives worse. They will reinstate the ObamaCare tax and strive to make their authority absolute. Anyone who stands against them will be demonized and destroyed by any means. The polls that say Dementia Joe Biden will win in the greatest landslide in history are lying just as they did about Hillary in 2016. What Democrats are hoping is that they can perpetrate the greatest voter fraud campaign in the history of the world. President Trump cannot allow voter fraud to occur. Their lie that Trump had Russia assist them has been exposed as utter lies just as Bolton stating that Trump asked China to help him win the next election in front of a dozen witnesses is criminally bogus. Democrats have proven they will lie, cheat, steal, and kill to seize power. Never submit to the tyranny of the left!

Trump’s Dilemma: How to Restore Order in Rebellious Blue States

Chicago rocked by worst weekend of gun violence this year

Left-wing activist Shaun King Statues of Jesus Christ should be torn down, ‘form of white supremacy’ 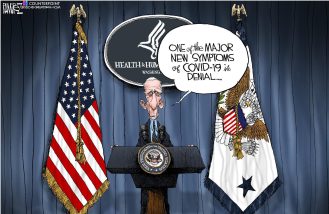 trying to tear those people down. I wish I had understood this when I was young. It would have spared me trying to understand why these people told me I’m worthless and trying to be better using their standards.

Leftist lies are how leftists keep the righteous off balance and empower ignorant liberals. When you understand the truth and know all the facts rather than just what leftists say, then you are on your way to enlightenment. When you understand that all people are not good, but that half of people are bad to some degree, is the beginning of wisdom. That is when you will stop falling prey to leftist’s hateful lies. This continuing Covid scare is one of their greatest frauds. The testing revealing more people with Coronavirus disease does not differentiate between Covid-19 and other flu viruses. Hospitalizations and deaths have not increased because Democrats are not being allowed to put the infected into old folks’ homes. Likewise, deaths from pneumonia, heart attacks, and cancer are falsely attributed to Covid. People need to stop believing every single lie uttered by two-faced Democrats or they will never learn the truth.

The lawlessness and corruption of Democrats runs deep. The Seattle mayor allowing anti-American anarchists to take over a part of the city calling it the summer of love instead of insurrection is nothing less than treason. She has no right to ask the police she cursed and commanded to stand down to go in and clear them out. Let her go in and dismantle their foreign government invading our country. If she doesn’t, then President Trump should send in the Guard to take them down and oust her from office at the same time. Every last one of them, including her, should be stripped of citizenship and banished. This is what used to be done with dissident criminals who refused to abide by laws. There is certainly no place for criminal rule in the freest country in the history of the world. The police don’t need reform. They need to be unshackled from taking down criminals and our courts need to have their corrupt leftwing activists removed who give criminals rights over their victims.

Christians and Americans have been foolish to let leftists take control of this country. They have taken God out of the public forum. They have infused our schools with atheist America hate. This is not something of which we should be proud or approve just because it’s someone’s point of view. A Republican candidate’s daughter is campaigning against him. He says he’s proud of her independence. I would still love my daughter, but I would not be proud of her if she were stupid and gullible enough to join ranks with the left. Thankfully, my daughter grew up learning morality and righteousness. She honors those who serve to protect us and, as a paramedic/firefighter, I am proud of her having served in our ranks. America needs to be restored to her righteous people before she falls to the wicked.]

Black Lives Do NOT Matter nor Does Covid-19

THIS INSANE LIBERAL STUPIDITY MUST END!!!

This site is my opinion only and is unpaid. I am a retired Paramedic/Firefighter with 25 years of service in the City of Dallas Fire Dept. I have a B.A. degree in Journalism, and A.A. degrees in Military Science and History. I have spent my life studying military history, world history, American history, science, current events, and politics making me a qualified PhD, Senior Fellow of the Limbaugh Institute, and tenured Professor for Advanced Conservative Studies. 😄 It is my hope that readers can gain some knowledge and wisdom from my articles.
View all posts by dustyk103 →
This entry was posted in Democratic socialism, Elections 2020, Racism, Social Justice, Socialism, Voter fraud and tagged Black Lies Murder, Black lives matter, CHAZ CHOP CHAOS, Democrat voter fraud, Democrat Voter Slaves, Donald Trump, Leftist Big Lies about Trump, Leftist propaganda, Leftists sowing chaos, Modern Democrat Slavery, Social Justice Warriors, Tim Scott. Bookmark the permalink.