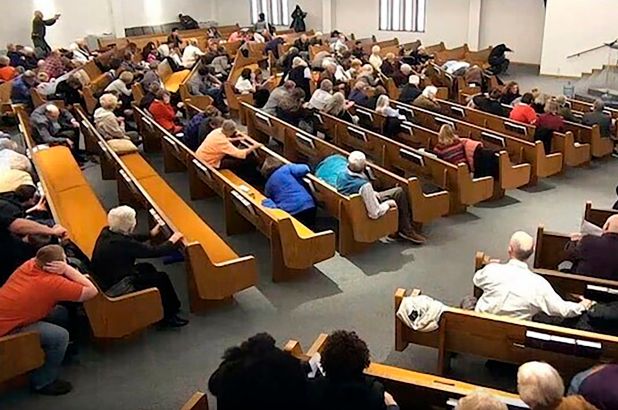 This weekend another rabid Democrat walked into a church to kill as many Christians as he could only to be gunned down by a Texan before he could kill more than two people.  The entire shooting took six seconds and was caught on camera.  As usual, before the victim’s blood was dried, Democrats came out to condemn – not the shooter, but the guns.  In their condemnations they denounced concealed carry holders like the man who shot the rabid

Democrat.  Biden even went on to say allowing citizens to have guns is “irrational” condemning “assault weapons,” high capacity magazines, and more.  This is akin to de Blasio making the vapid statements about anti-Semitism attacks in NYC saying something must be done.  Democrat’s solutions are always to make the problems worse for the people.

A “gun free zone” is a free fire zone for leftists

As usual Democrats have everything backwards in their beliefs.  The shooter had a shotgun, not a rifle that Democrats call “assault weapons” because they haven’t the first clue what the difference is between the two.  Of course, they make no mention of the dozen innocent people shot in Chicago by their street thugs.  If America wants to protect the nation from criminals, terrorists, and rabid Democrats, then the people should ban Democrats from holding government office at any level from the federal down to the local teachers.  The kind of stupidity they are teaching has no place in a moral country.

Republicans want armed citizens like Jack Wilson in the Tarrant County Texas church who dropped an assassin in his tracks saving dozens of churchgoers.  Democrats want gun laws to keep men like him from being armed so they can cry about how much Jesus loves martyrs.

Church shooter taken out by parishioners

Liberal Democrats lack the capacity to think rationally because of the fecal matter clogging them between their ears due to their suffering from the terminal effects of encephaloproctosis (a paramedic term describing people who have their heads up their asses).  Liberalism is, indeed, a mental defect of dysfunctional thinkers who lack a moral compass.  It is only due to liberal Democrat policies to empower criminals, encourage terrorism by their thugs, and drive psychotics insane with their propaganda that has wrought today’s climate of leftwing fascist persecution of Christians in America.  Democrats have no “common sense” solutions.  Everything they propose is what causes the problems Republicans must strive to solve and then the Democrats just get in the way.

Is your name Biden?

This site is my opinion only and is unpaid. I am a retired Paramedic/Firefighter with 25 years of service in the City of Dallas Fire Dept. I have a B.A. degree in Journalism, and A.A. degrees in Military Science and History. I have spent my life studying military history, world history, American history, science, current events, and politics making me a qualified PhD, Senior Fellow of the Limbaugh Institute, and tenured Professor for Advanced Conservative Studies. 😄 It is my hope that readers can gain some knowledge and wisdom from my articles.
View all posts by dustyk103 →
This entry was posted in Democratic socialism, Elections 2020 and tagged America transforming, Anti-Christian Left, Church Shooting, Democrat Gun Control, Democrat Hate Crimes, Joe Biden, No Self-Defense, Tarrant County Church Shooting. Bookmark the permalink.