Joe Biden says of the impeachment inquiry, “This is about Donald Trump, not me.”  In other words, ‘Pay no attention to that deep corruption Biden stupidly bragged about.  Look at Trump!’  Talk about a campaign of mass distraction as Republicans investigate Democrat corruption that liberals not only ignore but endorse with their duplicity!  Like every conviction in the #MeToo Movement that has been about trying to nail Trump as a sex offender, look who fell that the Democrat media tries to cover up.  All the liberal Schiffheads are at a loss as to why Weinstein and Epstein crashed and burned while Trump sails on.  The impeachment inquiry likewise has outed the corrupt dealings in foreign affairs by Democrats rather than anything Trump has ever done.  They might want it to be about Trump, but it has all backfired in their faces – and we laugh!

Leftists who think they can fool all of the people all of the time, but they only net the liberals who are the fools that constitute the some of the people all of the time.  They believe they can make Trump asking for a favor from the Ukranian president to root out corruption out to be “bribery and extortion.”  We have seen Biden on video bragging about using bribery and extortion to get his son a free ride in one of their corrupt corporations.  That’s just like using their twists of what Trump said on the Access Hollywood tape and his Charlottesville statements to mean the opposite of what Trump meant when he spoke.  Words mean something and changing the words, or the context, is meant to fool the ignorant.

This is no different than Wall Street now running in terror from Elizabeth Warren who is just another Bernie Sanders communist.  They have come to realize she is dead serious about implementing true democratic socialism to steal all the wealth she can from the rich.  They are always happy to endorse corrupt Democrats who say that’s what they’ll do, but then give them tax loopholes by which to dodge their high taxes.  Democrats never saw a tax they didn’t like but they expect it to fall on the unaware middle class.  The only reason America has not become a 21st century phenomenon is because Democrats scarfed up much of the wealth during the 20th century. 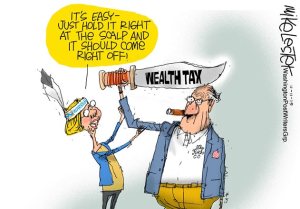 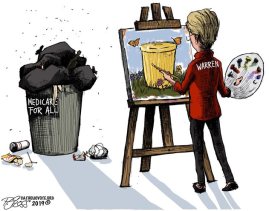 Warren, like all communist totalitarians, believes all money belongs to the government first and that all jobs are created by the government’s beneficence.  With her backwards liberal thinking, she thinks government provides the schools, roads, police and fire protection for the people for free.  This typically leftist dysfunctional logic fails in understanding that the people who work are the ones who pay the taxes for those things from the money they make at those jobs those “evil rich people” pay them to do that provide that.  Government provides nothing for anyone without first taking it from someone else.  Contrary to their belief, they can’t just print up monopoly money to dole out.

All Democrats are openly declaring their communism to stop deporting illegal aliens, even criminals, and giving them free healthcare at the expense of taxpayers while they are forced to pay for ObamaCare, free education, and free votes proving their true hearts are filled with contempt for Americans.  Their only goal is power and confiscation of wealth, and they will lie and cheat so they can steal.  When others jump into the race under the guise of being against this agenda, do yourself a favor and don’t fall into their trap again.  Bloomberg being “a ‘real’ billionaire and a ‘real’ businessman” is just more leftist bullsh*t by which to dupe liberal Schiffheads.

He was nothing more than a leftist infiltrator in the Republican Party who showed his true nature once he gained power by becoming an Independent and is now a Democrat.

Democrat corruption is the swamp and those Republicans who work with them are part of the swamp rats.  As they strive to sling enough mud by which to totally smear Donald Trump, his counterstrokes are revealing that the true corrupt criminals are the Democrats.  This is why he is driving them insane and why they are exploding in public revealing their true nature.  They have succeeded for a century in duping the ignorant.  Now the only excuse for their fools is in the psychological disorder of dysfunctional liberalism.  The willful denial and willingness to believe in lies due to their emotionally irrational thinking is due to their immature egos.  There comes a point when you must realize that you can’t sway someone from choosing what is wrong.  That’s when you shine the light on all they do and bring down the hammer of justice. 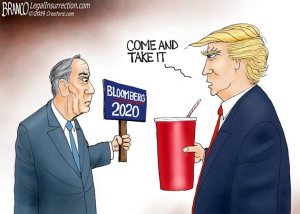 Did Nikki Haley tell Trump about treachery in his cabinet?

This site is my opinion only and is unpaid. I am a retired Paramedic/Firefighter with 25 years of service in the City of Dallas Fire Dept. I have a B.A. degree in Journalism, and A.A. degrees in Military Science and History. I have spent my life studying military history, world history, American history, science, current events, and politics making me a qualified PhD, Senior Fellow of the Limbaugh Institute, and tenured Professor for Advanced Conservative Studies. 😄 It is my hope that readers can gain some knowledge and wisdom from my articles.
View all posts by dustyk103 →
This entry was posted in Democratic socialism, Elections 2020 and tagged 2020 Elections, Democrat 2020 Presidential Debates, Democrat corruption, Donald Trump, Hunter Biden, Joe Biden, Jr., Michael Bloomberg, Trump Impeachment Inquiry. Bookmark the permalink.