Isn’t this rich?  Democrats who won’t defend America’s border from invading immigrants, and curse European nations like Poland and Hungary who defend their borders against invading Moslems, are cursing Trump as abandoning our allies to the Turks.  Talk about living for today and forgetting yesterday.  Liberals live life with their heads where the sun doesn’t shine.

President Trump is pulling troops back from the Syrian border with Turkey.  Does anyone know why?  Do they even know what has been happening in this region for the past year, five years, ten years?  Phfft!  Liberals are ignorant of anything outside of their video games and the lamestream media smears by their tv clowns.

2003: Bush 43 invades Iraq to oust Saddam Hussein who had been at war with the USA since ’91 when Bush 41 destroyed his invading army in the Gulf War to liberate Kuwait.  Hussein had spent the Clinton years shooting at our aircraft, committing genocide against the Kurds with chemical weapons, and sending an assassination squad into the U.S. to murder President Bush senior.  Democrats declare that there will be tens of thousands of dead U.S. soldiers.  Hussein’s forces are totally destroyed, and he is ousted in a month while U.S. troop losses are virtually non-existent.

2004: Bush congratulates the troops on their crushing victory over Saddam and Democrats curse him for it as celebrating victory before it is achieved because of the growing insurgency.  They encouraged anti-American Iraqi dissidents to rebel against Bush’s nation building attempt to foment an insurgency killing our soldiers.  Iran assists them by supplying weapons, bombs, and training, and some suspect Democrats were assisting them as well.

2007-8: General Petraeus destroys the insurgency and Democrats curse him as being a war criminal killing Iraqi civilians and betraying Americans.

2011: Obama pulls all U.S. forces out of Iraq.  Obama had been spending billions of American taxpayer dollars backing the Muslim Brotherhood throughout the Middle East to overthrow their governments including; Egyptian President Mubarak, Libyan leader Kaddafi, and insurrections in many other countries including Syria to oust Assad.

2012: In Syria, chemical weapons are used which Obama had said was a “red line” for Assad.  Obama backed Muslim Brotherhood forces, while the Russians supported Assad.  Obama allows American Ambassador Stevens in Libya to be assassinated on September 11 refusing to send any rescue to the embassy in Benghazi.  It is surmised that Stevens 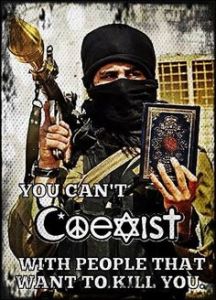 threatened to become a whistleblower over Obama’s supplying the Muslim Brotherhood.

2013: Egyptians overthrow the Muslim Brotherhood president Obama assisted to gain power.  Obama is incensed and threatens to cut off aid from Egypt.

2014: The Muslim Brotherhood forms the Islamic State in hopes of re-establishing the Caliphate in the Middle East that was conquered by the Turks a thousand years ago.

2015: Obama says that ISIS is the “JV team” of terrorists as they rampage across Iraq and Syria committing mass atrocities against Christians and any Moslem who refuses to join their Jihad.  Obama wages a faux bombing campaign that does no significant damage to ISIS.  At the same time as he is depleting U.S. munitions, he is restricting the production of weapons to replace U.S. stockpiles.

2016: A couple of thousand American soldiers are redeployed into the region with Rules of Engagement orders from Obama that puts their lives at greater risk to protect civilian lives.  They ally with the Kurds in Syria against Assad.  The Kurds take the opportunity of receiving American weapons and having American forces shielding them to make attacks against the Turks from whom they want independence.

2018: American troops kill two hundred Russians that attacked their position in Syria.  Assad remains in power with Russian support while the Kurds continue incursions into NATO ally Turkey over which the Turkish president complains vehemently to Trump who cannot control our “allies.”

2019: Trump announces he will pull out of Syria.  Turkey immediately invades to push back the Kurds.  Democrats curse Trump as abandoning our allies and demands he send troops to fight for them and build a wall protecting the Syrian border.

Meanwhile, in the USA, Democrats do all they can to obstruct a wall being built along the U.S.-Mexico border to stem the tide of the illegal immigrant tsunami they created or stem the flow of drugs and human trafficking being committed by Mexican drug cartels.  The Mexican government army is defeated by criminal cartels and surrender the son of El Chapo whom they had just captured.  This is a joke of epic proportions.  Democrats are supporting America’s enemies on every front while cursing Trump for defending America.  Mexico is doing something about the river of Central American communists trying to invade the USA under the pretense of being refugees, but it will take an invasion by the American military to destroy the cartels that now rule along the border.  Democrats will never condone but would actually condemn any such action as violating our neighboring ally because the people who profit from the drug cartel smuggling business in the USA are in the Washington swamp.

Trump is wrong; Obama not ‘founder’ of ISIS, but the ‘Father’ of ISIS

[Author’s Note: As President Trump says, this is like having two of your friends fighting with each other.  The only thing you can do is let them hurt each other and then pull them off before they do too much damage hoping they will have had enough. 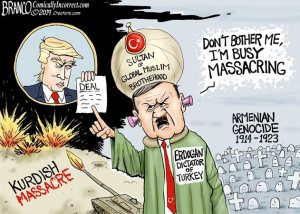 That Democrats damn him for it after they cheered Obama abandoning the region to the Muslim Brotherhood’s Jihad is both disgusting and comical.]

This site is my opinion only and is unpaid. I am a retired Paramedic/Firefighter with 25 years of service in the City of Dallas Fire Dept. I have a B.A. degree in Journalism, and A.A. degrees in Military Science and History. I have spent my life studying military history, world history, American history, science, current events, and politics making me a qualified PhD, Senior Fellow of the Limbaugh Institute, and tenured Professor for Advanced Conservative Studies. 😄 It is my hope that readers can gain some knowledge and wisdom from my articles.
View all posts by dustyk103 →
This entry was posted in Democratic socialism, Elections 2020 and tagged Democrats condemn Trump withdrawal from Syria, Democrats demand Trump protect Kurds, Donald Trump, ISIS still a threat, Trump "abandons" Kurdish allies, Turkey invades Syria, War in Syria. Bookmark the permalink.