This article is not about the Democrat coup to oust Trump over fraudulent collusion, obstruction, or coverups.  It is not about the Democrats obstructing the investigation into their coup.  It’s not just about Democrats giving criminals the right to vote.  It is not just about Democrats importing Latino-communists to cast provisional ballots that they illegally intermix with citizen’s ballots to overturn elections like they did in California, New York, Illinois, and New Jersey.  It’s about violating the Constitution by corrupting the use of their Electors to overthrow the rights of the popular vote of voters in their states.

Democrats say they will give the electoral votes of their states, which are determined by the democratic process of the majority of voters in their states, to the recipient of the national popular vote as determined by other states like California.  How is that democracy?  It is not Republicans who are the greatest threat to democracy.  Democrats will violate the democratic process in their own states to gain national power.

National power gives them authority over the nation’s taxes to dole out all the people’s money to whom they please.

America is a democratic republic in that all the people elect their representatives by the democratic vote of their districts.  At this level the only restriction on voting is that one must be eighteen and a citizen.  The problem with democracies is that they are easily corrupted through voter fraud, people voting multiple times, those who are ineligible to vote doing so illegally, pandering by politicians to buy votes with promises of giving away everything for “free” paid for by taxpayers, smears and mudslinging cries of racism and sexism, and a multitude of outright lies.

For example, California just proved that Democrat voter fraud works.  Their districts elected Republicans in 2016, but after adding provisional ballots, ballots whose casters are unknown and unverified, to the legally cast ballots of citizens, they overturned a score of congressional districts to make them Democrat.

This is why Democrats cry against voter ID with their lies that “every vote must count” claiming “voter ID is voter suppression.”  Provisional ballots are not supposed to be counted until verified, but Democrats don’t care for legality.

States also elect their senators based on the statewide popular vote.  The problem for Democrats is that the nation elects the president on the basis of state electoral votes rather than a national popular vote.   The dilemma for Democrats is that there are states and districts that are so heavily Republican that their voter fraud cannot overcome them.  Their solution is to make laws to overthrow the Constitution by giving those state’s electoral votes to the winner of the national popular vote.  This effectively overthrows the popular vote of their own states by giving their vote to the blue states that successfully stuff the ballot box with millions of fraudulent votes.

This is complete violation of Constitutional law.

The Electoral College is designed to limit voter fraud

Why the left wants to abolish the Electoral College

[Author’s Note: Democrats say there is no such thing as voter fraud when they win.  But when Republicans win, they cry voter fraud so extreme that they blame other countries as having hacked the election.  This psychotic, dysfunctional, two-faced delusion is how leftists think.  When they commit voter fraud it is righteous in their minds.  When the people reject their voter fraud, they are traitors in their minds.  When they are exposed, it is a crime in their minds.  Democrats are at war with Republicans and this is how it manifests to violate the Constitution that they loath.  Without the Electoral College then New York City, Chicago, and Los Angeles, America’s three largest and most corrupt cities, will decide who leads the country.

And then they can reinstitute their scheme to siphon away red state taxpayer dollars to support their failing socialist states.

Democrats only outwardly appear to be divided in their plot to usurp the presidency.  Pelosi admits they are united.  This appears to be denial on her part unless you understand how leftism works.  The fact is that they all want to enact a coup over the presidency.  They all want to overthrow the Constitution.  They are all communists.  They are all attempting to destroy this country to establish themselves as dictators. The only difference is that half of them are openly admitting it, while the other half is concealing their true intentions.

That’s why Democrats are known as the party of two-faced hypocrites, deceivers, and dupes.] 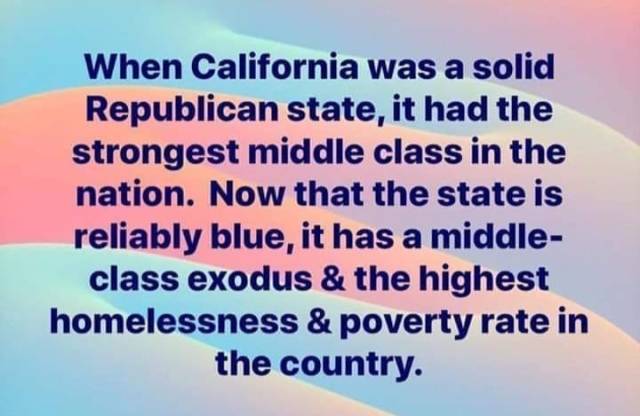 California Dreamin of Communism – the Nightmare

This site is my opinion only and is unpaid. I am a retired Paramedic/Firefighter with 25 years of service in the City of Dallas Fire Dept. I have a B.A. degree in Journalism, and A.A. degrees in Military Science and History. I have spent my life studying military history, world history, American history, science, current events, and politics making me a qualified PhD, Senior Fellow of the Limbaugh Institute, and tenured Professor Emeritus for Advanced Conservative Studies. 😄 It is my hope that readers can gain some knowledge and wisdom from my articles.
View all posts by dustyk103 →
This entry was posted in Democratic socialism, Elections 2020, Voter fraud and tagged Donald Trump, Electoral College, States Violate Constitutional Elections, Voter fraud, Voter ID. Bookmark the permalink.