America’s economy is striving to come roaring back, while Democrats want to be re-elected to power through lies and slanders to continue to keep America’s economic engine stalled.  As this image of a Formula One car being pushed by hand rather than having it roar down the road illustrates, how Democrats run the economy is a pathetic effort compared to the reality of American economic might.  Liberals who don’t want the truth to be known portray Rush Limbaugh as a “shock jock” who paved the way for Trump’s presidency by advancing hate and bigotry through lies and smears.  This isn’t just intellectual dishonesty, but projection of their own motivations onto the righteous.  It is their effort to impugn them in the eyes and ears of those who see and hear what they say without paying attention to what they do.  The Left cannot have people listening to the good moral sense of Rush Limbaugh lest they realize how they have been duped.  Lemmings don’t follow when their eyes are opened.

America’s economy has never been stronger.  It has been proven time and again that when government taxes away wealth it is not for the benefit of the people, but to line the pockets of politicians and their crony donors.  Of the $10 trillion dollars of deficit spending made by the Obama regime to add to the National Debt, $6 trillion of it went to Wall Street.  The economic crash, engineered by congressional Democrats in 2008 through their mortgage banks, that they blamed on Bush in order to get Obama elected set the stage for Democrats to justify stealing wealth from the nation to repay their donors for their losses.  They artificially propped up Wall Street with taxpayer funding.

Now that Americans have a Republican leader who is not confiscating their wealth, and people are investing in America once again with faith that the government won’t steal it out from under them, the Stock Market and the economy are soaring.  All Democrats have is a promise to stop that economic boom by restoring Democrats to power, raising taxes, and squandering that wealth on foreign invaders to vote for them.  Their demand that minimum wage starter jobs be made into higher paying career positions for their uneducated, parasitic voters is the only vestige remaining of their economic sabotage.  Trump has done away with Obama’s high taxes and business crushing regulations, but most Democrats are still too dense to see what is in front of their faces.

Democrat congressional candidate of the Queens/Bronx district, Ocasio-Cortez, laments (celebrates) the closing of her old coffee shop.  The place where she worked is folding due to her own socialist policies of raising the minimum wage to $15/hr when most businesses are incapable of supporting such a payroll.  Socialists believe business owners do not go into business to make a better living, but to be a charity for deadbeats.  Only liberals living in the stagnant economy of Democrats think minimum wage jobs are a career.  This is the kind of economic stupidity, the kind of business malaise that has overtaken a country where Millennials are being taught that socialism is an ideology of rainbows and lollypops.

President Trump is the best chance America has of being restored to greatness.  He needs Republicans to be on the Trump Train with him, not working with Democrats.  Hopefully, now that McCain is gone, Arizona will elect two senators this November who will work with Trump rather than with Democrats.  Alaska made the stupid mistake of electing a new RINO to plague Trump for the next six years.  At least McCain’s death, the Republican who always bragged about how he works with Democrats toward their agenda, frees up a vital possibility for a vote for greatness.  But that won’t happen if Democrats are allowed to take the reigns of power to once again stall America’s economic engine. 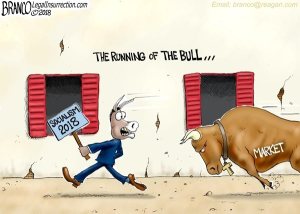 Are Democrats Obvious or Oblivious?

Voters lagging in Midterms because GOP support for Trump lags

Liberals are Oblivious to the Realities of Socialism, Business, and Taxes

This site is my opinion only and is unpaid. I am a retired Paramedic/Firefighter with 25 years of service in the City of Dallas Fire Dept. I have a B.A. degree in Journalism, and A.A. degrees in Military Science and History. I have spent my life studying military history, world history, American history, science, current events, and politics making me a qualified PhD, Senior Fellow of the Limbaugh Institute, and tenured Professor for Advanced Conservative Studies. 😄 It is my hope that readers can gain some knowledge and wisdom from my articles.
View all posts by dustyk103 →
This entry was posted in Economy, Politics and tagged 88, Alexandria Ocasio-Cortez, Democrat Economic Malaise, Democrat High Taxes, Democratic socialism, Democrats Choke Economy, Donald Trump, Obamaism, Republican Low Taxes, Republican Roaring Economy. Bookmark the permalink.