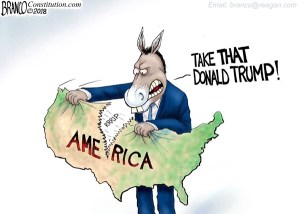 It’s easy to see how Democrats have earned the moniker “Demonrats,” (just turn the ‘c’ 90 degrees).  As the Left took up the banner of the most vile, inhuman scum of the world to praise them as Dreamers, Americans are taking notice.  The “divine spark” may be in all of us, but those who embrace Satan absolutely, have rejected God utterly, and become inhuman through their inhumane acts of inhumanity are not deserving of unconditional acceptance.

Naming them animals or sub-human is an insult to animals and those who have been treated inhumanely in the past.  Redemption is never free.  God’s Love may be all encompassing, but it is NOT unconditional.  Forgiveness of sins is free, but entry to Heaven is not.  A heart filled with murder has no room for loving Christ.  Democrats do not take up the cause of righteous American Christians, but everyone who is against Christ.  They ally with atheists and Islamists, criminals and terrorists, socialists and dictators who all want America reduced to a third-rate power allowing the global despots of the world to rule as the elites of a New World Order.  Only Christian America stands in their way. 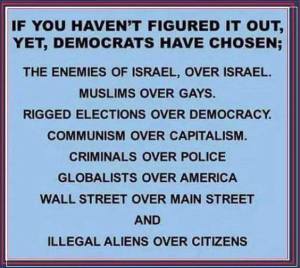 Half Truths About Islam

Liberal media focus on tweets rather than issues of substance

Democrats act like the election of Trump is the election of Nathan Bedford Forrest.  They think Hitler was a Christian because he used the Iron Cross, and the KKK were Christians because they burned crosses.  First off, the Christian cross is wood and was not burned, but stands as a symbol of God’s love and sacrifice for the good people of the world to have their sins forgiven upon their acceptance of Christ as their Savior.  Those who desecrate it, as the Nazis and KKK do, have no love for Christ in their hearts.  But liberals wouldn’t know love of God from blasphemy, sacrilege, and heresy if they were hit in the head with their Koran.  They deny the Holocaust happened, call abortion a human right, declare white men to be inhuman, and ally against all things Christian.  They pretend that Islam and illegal immigrants constitute another race so they can cry racism at Americans.

Democrats pass off many obfuscations, misrepresentations, falsehoods, and outright lies as the truth to their lemmings.  When you exist in an echo chamber where all you hear is what you want to believe is true of conservatives rather than what they are actually saying then your beliefs about them are delusional.  They believe in the caricature they’ve created of Trump, which is why they don’t recognize his genius, drive, and patriotism resulting in him rolling them like the Road Runner rocks the coyote.  Try listening to what both sides say about themselves and then see if you think it is conservatives who are lying.

Leftists are claiming that the spies they put into the Trump campaign in violation of the law were there to protect his campaign from the Russians.  So that’s why they’ve been slandering Trump for the past year over lies he worked with Russians to steal the election?  If Obama was honestly trying to protect Trump from Russia, then why didn’t he inform him of the FBI investigation and FISA warrant?  If his spying was on the up and up, why did he leave Trump in the dark, why leave Congress in the dark, why did Hillary enlist Steele to write a fake dossier to get the warrant, why did Comey present it to Trump without telling him Hillary had it manufactured, and why is Mueller investigating possible collusion between Trump and the Russians?  This was all completely criminal, which is why they are trying to change the language to make their spy an “informant,” because putting a spy in the campaign is illegal while having an informant leak information is not. 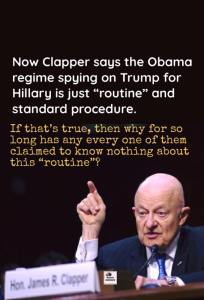 Most importantly, why didn’t they afford the same “protections” to the Hillary campaign when they claim their servers were hacked by the Russians?  Why didn’t they spy on her dealings with Russian companies?  Democrats have no more clue how to cover up their lies with more lies than they do of how to tell the truth.  When Obamaites like Brennan say he is against Russia when he is an avowed communist does anyone question his veracity?  Why are Democrats attacking the innocent members of the NRA every time one of their psychotic terrorists conducts a school shooting? Why is the membership of Rush Limbaugh rising to new heights?  Because people are sick of Democrat lies, liberal fascism, and leftist deceptions.  People want to hear the truth about conservatism and liberalism and Rush Limbaugh is one of the bests places to hear it because he plays both sides in their own words. 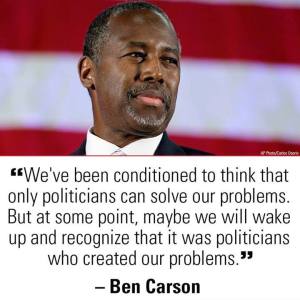 Polls keep saying that Trump is not popular, and that Republicans will lose elections like they did in 2016.  These are not designed to reflect public opinion, but to create it.  Liberals are incensed that Republicans are not believing their lies to the point they are accusing Republicans of being immoral.  The people who burn the American flag, slander police as racists, who praise MS-13 gangs as divine humans, while simultaneously endorsing abortion, who are for allowing men into women’s restrooms, and who champion every form of sexual perversion and molestation of women and children say Republicans are immoral.  ROTFLMAO! 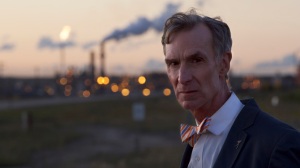 Democrats are incensed that many of their welfare voter slaves are abandoning their party because Trump reduced black unemployment to record lows while Democrats continue to demand more illegals be imported and given rights.  At the other end of the spectrum, idiots like Bill Nye the Liberal Science Guy, who is going to save the world, wants the government to tax cow farts to combat global warming.  One of the funniest liberal videos I’ve ever seen was this one in which they were measuring the methane pollution of natural gas production.  They went up to a manhole over the sewer line and were astounded at how much methane was coming out of it. 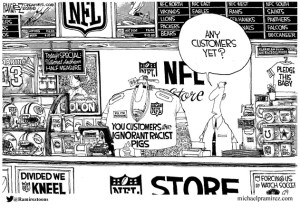 Seriously!?!  Do these people not know what animal digestion produces?  These are the people that want to teach us about global warming science and are angry that we don’t believe their futuristic predictions.  Liberals continue to bet on Obama’s legacy of failures that Trump has easily dismantled to make America grow again.  What is more irritating than anything else is that people are turning more and more to the knowledge and wisdom of Rush Limbaugh.

Betting on Obama’s legacy of failure 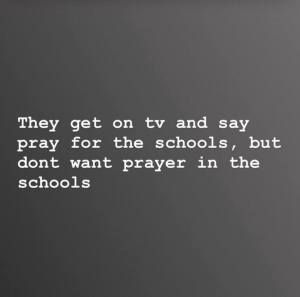 Leftists are in terror of Trump investigating the investigators pretending they are pure of heart and Trump is only interfering in the truth they seek.  This lie falls on its face in the greatest cover up lacking any transparency if the investigators cannot be scrutinized.  Only two-faced liberals could think they could get away with this.  Obama’s legacy was built on a house of cards written by executive decree in the Oval Office.  Liberals wanted Obama to empower Iran and Cuba, suck America’s wealth dry over global warming, and keep making America gloomy again, keep on bringing America down in decline, and laughing that they can finally destroy Islam’s Great Satan, the nation of Jesus Christ.  Now that legacy has been shattered thanks to the efforts of one great American patriot.  Lie as they might, there is no concealing the fact that the spying and the lying is all being done by Democrats and Obama is the Agitator-in-Chief who directed and encouraged their blatant crimes.

They’re trying to claim they began investigating Trump when he hired Carter Page over his business dealings with Russia.  It’s just like liberal Democrats to be irate when their victims resent being raped like Bill Clinton’s women rather than being grateful.  What about Hillary’s business dealings with Russia?  I guess when you’re the rapist that destroys the women and takes graft from Russians then you are exempted from suspicion of collusion.  Against Russian interference in elections leftists uphold allowing illegal aliens to vote in America’s national elections.

This ultimate two-faced hypocrisy of creating one crime while allowing another is just the icing on the cake of leftism.  That they are being exposed and taken apart by Trumpians is the greatest glory being achieved by this noble man who stepped up to serve this great nation and leave liberal America haters living in darkness.

MSNBC living in the darkness of liberalism

“There are two wolves that are always fighting.  One is darkness and despair.  The other is light and hope.  Which wolf wins?  The one you feed.” – Tomorrowland, from a Cherokee legend

Leftism is always feeding the wrong wolf.  Their glass is always half empty.  They think the world is going to end and their belief is what will bring it to pass as they tear down what is right and good in the world. 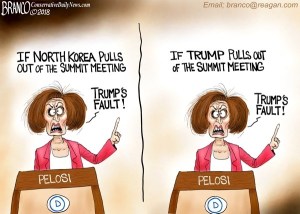 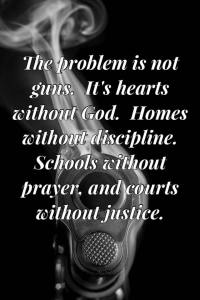 This site is my opinion only and is unpaid. I am a retired Paramedic/Firefighter with 25 years of service in the City of Dallas Fire Dept. I have a B.A. degree in Journalism, and A.A. degrees in Military Science and History. I have spent my life studying military history, world history, American history, science, current events, and politics making me a qualified PhD, Senior Fellow of the Limbaugh Institute, and tenured Professor Emeritus for Advanced Conservative Studies. 😄 It is my hope that readers can gain some knowledge and wisdom from my articles.
View all posts by dustyk103 →
This entry was posted in Politics and tagged Barack Obama, Donald Trump, James Clapper, Obama spying on Trump Campaign, Obama's Scandals, Obama's Spies. Bookmark the permalink.