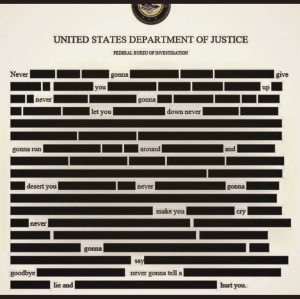 Leftists continue to laboriously sling mud at Trump with sex abuse allegations in the fanatic attempt to portray him as Bill Clinton and it continues to slide off The Teflon Don and land in their own laps.  Adam Schiff(ty) hit the weekend talk show circuit to try to sell his phony memo claiming that Trump “doesn’t want the public to see the underlying facts from the FISA application because it undermines his claim of vindication.”  Schiff is the one hiding the truth by trying to obscure the facts with his claims that Trump doesn’t want the truth known because he is demanding Schiff edit out classified information from his memo himself rather than give it to Trump to do.  The president sent Schiff’s memo back to have Democrats edit out and redact classified information themselves so that they cannot make a fraudulent claim that Trump is hiding necessary facts.  The Nunes and Grassley memos had no difficulty relating the pertinent facts without direct reference to classified intelligence, so Schiff’s planting classified material in his memo so he can demand that Trump redact it and set himself up to be smeared is completely demented.  Once again the Acme rocket explodes in coyote Democrat’s faces as Road Runner Trump whizzed by.  Liberal Democrats who believe their own lies are becoming hysterical in their efforts to slander Trump believing it will help them win back Congress in 2018, yet only the 20% some of the people who can be fooled all the time believe them.

Democrats love hearing themselves talk and believe their own lies.  This is a psychological condition of pathological liars known as Mythomania.  Democrat Adam Schiff thinks just because he speaks slanders of Trump that his words are received as true without question.  But the only people who believe him are the most gullible, foolish, and oblivious liberals in the country.

Redact: A term used by government to describe blacking out parts of text in a document that contains classified material.

Democrat Rep. Adam Schiff (ty), who smeared the release of the memo of Republican Rep. Devin Nunes exposing Obama’s criminal FISA warrant spying on the Trump campaign as containing classified material when it did not, is a member of the congressional Intelligence Committee where America’s deepest secrets are discussed.  He’s the same guy who ran to the phones during breaks from the interview of Donald Trump, Jr.’s meeting with a Russian woman and didn’t just leak details to his media friends, but spilled his guts.  This guy is as extreme a violator of national security as Obama bringing the Muslim Brotherhood into the White House!  He praises the Steele Dossier as a valuable document even after it has been proven to be a complete fabrication used to lie to the FBI and DoJ in order to obtain a FISA warrant to spy on Donald Trump and his campaign team.  Why doesn’t Schiff just leak this memo?  He obviously has no trouble with leaking to the leftwing media, but if he leaked classified information and methods that would be a felony crime for which he could and should be prosecuted.  This double agent has no business being in Congress let alone on the Intelligence Committee.

And the sex lies

On the flip side of Democrat lies is CNN continuing to labor to portray Donald Trump as Bill Clinton.  Jake Tapper and Dana Bash went to extremes attempting to slander Trump as approving of domestic abuse and sex offenses as a member of his team was accused by his former wives of abusing them.  They not only convict him as guilty until proven innocent on the basis of these allegations alone, but declare that President Trump is complicit for not joining them in their public hanging of a man based on accusations alone.  Tapper and Bash go so far as to declare that Trump approves of domestic abuse and smear him as a serial molester – the same lie they’ve been trying to peddle ever since they released the Access Hollywood tape of his locker room man talk with Billy Bush.  Liberals never tire of repeating their lies often enough and trying to make them big enough to eventually become the truth.

Only the most gullible, oblivious, vacuous minds adhere to the propaganda put out by the Left on an hourly basis.  The 20% of people who believe Schiff and Tapper are the 20% of whom Lincoln spoke when he said, “You can fool some of the people all of the time.”  No one has ever actually polled the American people to find out what percentage of liberals believe their own lies and what percentage of them know the truth but are actually the ones striving to deceive others.  I use 20% and 2% as generic percentages, but if one uses records from Nazi Germany as a comparison then it is 7% that are the dedicated liars who know they are spreading lies and propaganda, who know the truth but want to warp the public’s perception for their own political agenda, and it is upwards of 38% of the public who actually fall for their lies hook, line, and sinker.  You cannot be certain when it comes to polls because the Left produces polls using skewed data, not to reflect public opinion, but to shape it, which is why you will never see a leftist poll that puts Trump’s approval rating into majority territory.  To understand how dense and oblivious liberals are one only need to look at any of the many videos taken on college campi in which students answer basic questions with the most bone-header responses.  The fact is that people who are watching FOX News know all of what is going on while those who follow all the Democrat media outlets are wearing blinders while believing they see everything.  Some 80% of the public do not know the first thing about the Steele Dossier or Hope Hicks except what they’ve been told to believe.  If you debate them with all the facts they deny them and adhere only to their own version, which is why Ronald Reagan said,

“The trouble with our liberal friends is not that they’re ignorant; it’s just that they know so much that isn’t so.”

Things like the misinformation of Deep State duplicity, obfuscation, and manipulation.  Propaganda is like the Force – it has a strong influence on the weak-minded.  Arrogant liberals believe they are too intelligent to be fooled and accuse those who look past the headlines and investigate the whole story of being the ones who have been duped.  They are the people of whom Jesus spoke when He said,

“You hypocrite!  First remove the beam out of your own eye, and then you can see clearly to remove the speck out of your brother’s eye.” – Matthew 7:5

Liberal Lemmings and the Follower Mentality

This site is my opinion only and is unpaid. I am a retired Paramedic/Firefighter with 25 years of service in the City of Dallas Fire Dept. I have a B.A. degree in Journalism, and A.A. degrees in Military Science and History. I have spent my life studying military history, world history, American history, science, current events, and politics making me a qualified PhD, Senior Fellow of the Limbaugh Institute, and tenured Professor for Advanced Conservative Studies. 😄 It is my hope that readers can gain some knowledge and wisdom from my articles.
View all posts by dustyk103 →
This entry was posted in Politics and tagged Adam Schiff, Democrat propaganda, Devin Nunes, Donald Trump, Liberal Lies about Trump, Nunes Memo, Russian Collusion Investigation, Schiff Memo, Steele Dossier, Trump domestic abuse, Trump FISA Warrant spying, Trump sex scandal. Bookmark the permalink.