The Liberal Who Cried ‘Rape!’ 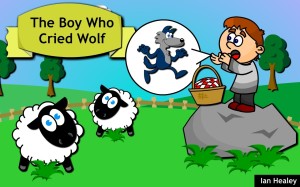 I wonder if most liberals are familiar with “The Boy Who Cried Wolf?”  Considering how young fools believe wise old sayings are obsolete rather than the wisdom of prior generations, I wouldn’t be the least bit surprised if the answer was very few.  Those who do not learn from history are doomed to repeat it.  And those who reject wisdom are often made the fool.

Leftist media are producing all the liberal lies and Fake News that they can print.  Liberals say people must believe the women who accuse Judge Roy Moore of being sexually inappropriate, molesting them, even raping them, only because there are so many – seven at present.  Newsflash!  Truth in journalism, just as in science, is not dependent on the number of people who say it or believe it.  When Galileo said the Earth revolved around the Sun next to no one believed him.  Did that make him wrong?  Only in the eyes of the myopic Left who fought against him!  When a dozen women accused Bill Clinton of molesting and raping them the Left poo-pooed them until there was physical evidence from the White House of his having sex with an intern.  They accepted his blatant lies and his wife Hillary destroying them for daring to out him until he was forced to confess due to physical evidence.  Now they say the women accusing Moore and Trump must be believed when there is as little actual evidence they have done anything wrong than there is that Russia hacked the election for Trump.  Yet how many millions of people believe in that lie?  How many millions of people believe the Earth is going to end, that all life is going to die out before the next century because of CO2?  How many believe Republicans are Nazis, bigots, and slavers?  How many still believe Sarah Palin said she can see Russia from her house?

The theory behind Hitler’s Big Lie is that if you can dupe people into believing it then it becomes the truth.  But that’s not how truth works.  Propagandists and bad actors use lies to coerce people into doing evil things, such as those who convinced a town in India to hang some men on the false accusation that they were raping little girls.  Journalism is about relaying the facts of an event.  Liberal media has told dozens of lies about Trump and not retracted a tenth of them.  But the fact that they have retracted some of their worst lies proves that what the leftist media is practicing is not journalism, but propaganda.  One of their blithering idiot pundits actually tried to claim that they are “making honest mistakes in their effort to treat Trump ‘fairly.’”  Did anyone ever do that with Obama?  Democrats are using false accusations of crimes they themselves commit all the time (as proven by Harvey Weinstein, Bill Clinton, and a host of liberal Democrats) and expect they can have Republicans hanged on their allegations alone.  Democrats and RINOs do not want Roy Moore in the Senate because he stands proudly for God and country and the leadership of Donald Trump.  Liberal liars at CNN say that the “honest mistakes” they are making should be taken by the people as a sign of their honesty.  ROTFLMAO!

How stupid do the Democrat media believe people to be?  You should believe in them because they’ve been caught in a few lies?  How many women fall for the line, “Honey, you should believe in me that having sex with all those other women makes our marriage better?”  Apparently, the answer is about 20% being the people who make up Lincoln’s “some of the people” who can be “fooled all the time” by the 2% who run the media and Democrat Party.  Then there’s the 20% who go along with it just because they’re Democrats, and the next 20% who aren’t sure what to believe because they don’t pay attention to what’s going on – the Left’s “vaunted center” of oblivious individuals.  The Left creates fictions and expects their fools to believe it and pass it off as reality.  Where Bill Clinton raped Juanita Broderick and they gave him a pass, Trump is accused of asking a woman for her phone number and they want him hanged!

Yet they accuse FOX News of lying about everything when everything FOX News reports is verifiable by other sources.  It is only liberals who report lies and try to get away with it.  It is only liberals who deny the truth or warp it into something they want it to mean.  They are not lying by mistake, but by design.  Deceivers, charlatans, propagandists, conmen, and frauds; the leftist media has never tried to tell people the facts, but to twist the facts and people’s thinking so they believe what they tell them to believe.  And when they get caught they print their retractions in the back pages hoping no one ever hears that what they now believe is a lie.  I came to realize this when I turned thirty and started paying attention to what Reagan said, what he did, how it worked, and what the media said about it until I realized the media was lying about everything!

Propaganda is like The Force – it has a strong influence on the weak-minded.

The definition of a leftist is someone who accuses others of being what they themselves are, blames others for what they themselves do, and takes credit for what others accomplish.  Leftists are the liars, deceivers, and control freaks who want to conquer others and force them to live in subservience to them.  Slavery is the soul of the Left while liberty is the soul of the Right.  Deceit is at the heart of the Left while truth is at the heart of the Right.  So when you choose a side between Left and Right don’t expect the Right to be fooled just because you choose to join sides with fools.  When you cling to proven lies and proven liars it is called denial and delusion.  When you believe dysfunctional logic over moral truth it is called immorality and wickedness.  If you believe God is the evil in the world and Satan is the good just because someone comes up with some sort of reasoning to make it so then you are in crisis.

The Rise of Fascism in America – Hearts of Hate

Democrat’s Plot Revealed How They Plan to Overthrow Trump

This site is my opinion only and is unpaid. I am a retired Paramedic/Firefighter with 25 years of service in the City of Dallas Fire Dept. I have a B.A. degree in Journalism, and A.A. degrees in Military Science and History. I have spent my life studying military history, world history, American history, science, current events, and politics making me a qualified PhD, Senior Fellow of the Limbaugh Institute, and tenured Professor Emeritus for Advanced Conservative Studies. 😄 It is my hope that readers can gain some knowledge and wisdom from my articles.
View all posts by dustyk103 →
This entry was posted in Politics and tagged Boy who cried wolf, CNN Fake News, Cry Rape, Democrat morality, Donald Trump, False Accusations, Leftist Ethics, Liberal lies, Liberalism, Roy Moore. Bookmark the permalink.