Liberal Democrats and their RINO buddies are all trying to dog pile on President Trump as being too “undignified,” “unhinged,” and “incompetent” to hold high office.  They all make deliberately petty little attacks on his dignity in order to incite a response.  It’s like a bunch of yippy little dogs trying to take down a bull, but when you mess with the bull you get the horns.

Republicans who are attacking Trump accuse him of “punching down” at them.  There’s no such thing as being petty in countering those who are making petty attacks attempting to smear their leader.  If a Chihuahua runs up behind you and nips your heels you don’t ignore him.  You turn and boot his nasty little ass through the goal posts!  Both Corker and Flake are living up to their namesakes in being yippy little heel biters backstabbing the man who is now the leader of the Republican Party.  The TEA Party’s message for these RINOs who pretend to support the conservative agenda is, “Don’t tell me you’re on my side as you try to stick a knife in my back.”  If you’re friends with Democrat politicians then you are not a friend of the people, you are a fraud.  McCain, who gave away the 2008 election to Obama, has always crowed about being able to “reach across the aisle.”  But his reaching out has always been to help Democrats achieve their agenda while hindering conservative Republicans.  Trump vowed to drain the swamp of such duplicitous people and it is happening as these Democrat-loving senators are being willowed out before next year’s elections even get underway. 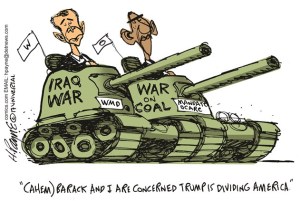 These lefty Republicans always refer to President George W. Bush and his “quiet dignity” as the example by which Republicans should live.  By not responding to smear campaigns or in getting down and dirty with opposing politicians, W didn’t bring dignity to his office.  The only result of his silence was the trashing of his legacy and being used as a scapegoat by Obama for eight years.  His coming out to criticize President Trump, and to cast aspersions on him as a white supremacist, reduced his standing in the eyes of Republicans even more.  Like his father he went from hero to zero because, although he largely did what was right while in office, he gave power and legitimacy to Democrats.  Both men won wars, but both men worked with Democrats to their own detriment.  The whole leftist meme that being a patriotic American makes people “white supremacist bigots against people of color” is as duplicitous as Antifa Nazis.  The leftist hate group has announced their plans for riots along with BLM on the anniversary of Trump’s election.  Another leftist Democrat advocacy hate group, the Southern Poverty Law Center, was removed from the federal roster by the Trump administration for labelling Christians, conservatives, and TEA Partiers alongside neo-Nazis and the KKK as hate groups.  MSNBC’s Lawrence O’Donnell proved the two-faced lunacy of the Left by implying that Gen. Kelly is a racist bigot and then denied using actual verbiage in doing so.  He then went on to condemn Trump as a liar for stating he did not say to war widow Johnson, “He signed up for this.”  Trump did not say he didn’t use those words.  He said he didn’t say it the way the media and lunatic congresswomen Wilson said he did.  Gen. Kelly’s heartfelt explanation of the conversation was all that was needed to clear the air.  However, leftists don’t care about American soldiers who died in battle or their families, but only in how they can smear Trump.

What the congresswoman could have done

Why this Democrat loon was listening in on this phone call reeks of a ploy by leftists to ensnare Trump in any way they could even to the point of fabricating a grievance.  Democrats, who call American soldiers terrorists and baby killers, who put portraits in the Capitol building depicting American police as pigs, who slander everyone in the military, who laud their own like Clinton and Obama who refused to serve while at the same time condemning those Republicans who did not serve as draft dodgers, display their cognitive dissonance when it comes to the righteousness of military service.  But the truly despicable duplicity that is being uncovered is not in Trump colluding with Putin to steal the election, the investigation of which has yielded zero corroborating evidence even with Obamaite Mueller digging twenty years back into Trump’s business in violation of his Constitutional rights to find something with which to impeach him, because you can’t prove something that doesn’t exist.  It is in Mueller attempting to cover up all of the dirt that has been dug up on the Clintons and Obamas, that it was they who colluded with the Russians taking bribes to sell American Uranium, that he is himself convicted.  It is in the creation of the phony dossier by the Hillary campaign and DNC claiming Trump hired Russian prostitutes to pee on a bed slept in by the Obama’s to use as a basis for accusing Trump of collusion.  It is their commission of a felony by putting Trump and his campaign under government surveillance through a FISA warrant that screams for prosecution!  When will those crimes come under a full investigation along with all of the other crimes of the Obamas and Clintons along with their minions Holder and Lynch?

This site is my opinion only and is unpaid. I am a retired Paramedic/Firefighter with 25 years of service in the City of Dallas Fire Dept. I have a B.A. degree in Journalism, and A.A. degrees in Military Science and History. I have spent my life studying military history, world history, American history, science, current events, and politics making me a qualified PhD, Senior Fellow of the Limbaugh Institute, and tenured Professor Emeritus for Advanced Conservative Studies. 😄 It is my hope that readers can gain some knowledge and wisdom from my articles.
View all posts by dustyk103 →
This entry was posted in Politics and tagged Barack Obama, Democrats, Donald Trump, Drain the Swamp, Dump Trump, Frederica Wilson, George W. Bush, Jeff Flake, RINOs, Russian Collusion, Uranium One Deal. Bookmark the permalink.

2 Responses to Why should Trump let yapping dogs bite?