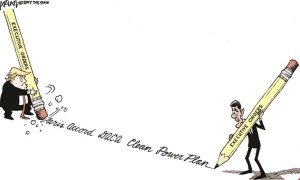 Trump is not the dictator Obama was.  He is not a vulgar person when compared side-by-side with Barry who was every bit as profane and vulgar as Trump.  Obama used his dictatorial powers via Executive Orders to do great damage to America up to and including shutting down coal mining for no good reason except to deny Americans energy.  Republicans are complicit in that they allowed this to be done without beating it down with their authority much as the NFL owners are complicit in allowing players to piss in the faces of their fans.

Obama imposed socialism on ignorant Americans doing great damage to the U.S. economy and culture.  When the people elected Republicans to stop him the GOP lay down as Obama took to using dictatorial powers to further crush the American people.  He shut down oil drilling and coal mining and forced people to allow men into women’s bathrooms.  THAT is why the We the People elected Donald J. Trump, patriotic Christian American business magnate, to take charge of the presidency and set this nation to rights.  The Left is painting any opposition to their agenda of unmaking America to establish a socialist dictatorship as racist and evil.  The righteous men of the USA are engaged in war with Nazi Communist socialism.  President Trump is not dictating to Americans as Obama did, but undoing the dictatorship of Obama.  Donald Trump has undone Obama’s illegal executive action to spend taxpayer money on his ObamaCare takeover of the health insurance industry.  The president does not have a right to spend money or make a budget.  Those belong entirely to Congress.  But RINOs working with Democrats wanted those taxes and the spending that goes with it.  The Republican Party needs to be cleaned out as much as the Democrat Party needs to be defeated.

Leftists are trying to claim that Trump dictated to the NFL to command their players to stand for the anthem.  This is false.  What he said was that they should out of their patriotic responsibility and code of conduct for players.  But they are not patriots.  They are racist America haters.  Their claim that Americans are bigoted against “brown people,” and then lumping Hispanics and Moslems into that category, is racist.  They are not part of the American Race that President Trump now represents.  Obama, on the other hand, DID dictate to private businesses many times.  The most vicious and corrupt of which was his commanding all private businesses to allow men into women’s restrooms.  Perverts of the Left say this was a righteous act, but it was nothing less than dictatorial imposition of perverted sexuality giving lawful access to degenerate men to molest little girls in a place of privacy.  He inflicted punishments on businesses through his regulations, through IRS targeting, and through judiciaries that crushed those who did not bow to his will.  Obama claims he lowered taxes when he actually imposed that largest peacetime tax increase in history through ObamaCare that desperately needs to be repealed and replaced with proper regulations on insurance companies.  Obama tries to take credit for the economy improving under Trump and compares the rise of the stock market during his tenure.  The only reason the Dow went above 12k under Obama was because he gave them $800B in borrowed taxpayers dollars every year for eight years to increase it 5k.  It went up 5k under Trump just on the promise of erasing Obamaism.  Obama’s “new normal” of 1% economic growth has already been shattered before Trump has managed to pass tax reform.  Democrats are buying illegal alien voters with taxpayer money by giving stealing from police and fire services and their pensions.  How do their “compassionate” policies affect Americans?  The Napa Valley fires were set by an illegal alien who was protected from deportation by sanctuary cities in a sanctuary state.  California reaped what it sowed.

Bring these Democrat traitors to trial for their crimes!

Democrats have always been the takers who steal from the makers with their high taxes confiscating wealth ever since Wilson got elected on a lark.  Is it any wonder businessmen hunkered down to protect their wealth during the Democrat years?  One does not start a business to remain poor because the government wants to take their wealth to give to their deadbeat welfare voter slaves.  The tax code needs an overhaul and Donald Trump is the man to follow in the footsteps of the Reagan Revolution and revitalize America’s economy.  Democrats and their RINO allies have made Washington, D.C. the richest region in the country with their wealth confiscation and putting businesses under their boot through economic regulations.  It is imperative that Trump force legislatures to undo all of this so that the lies of Democrats be utterly exposed.  RINOs like Senate Majority Leader McConnell blame the TEA Party for the obstruction he and his fellows are imposing on Trump claiming they selected Republicans who couldn’t win when it was he who sabotaged them.  The TEA Party, though no one speaks of it anymore, is still here and is composed of those patriotic Americans who want their government on a fiscal leash to stop wasting their hard-earned money.  Donald Trump is being the leader the TEA Party has been wanting, and hopefully he will recognize that helping TEA Party candidates win over GOP Establishment picks is exactly what he needs to overcome Washington’s inertia.

“Revising our tax code is not just a policy discussion – it is a moral one, because we are not talking about the government’s money – we are talking about your money, about your hard work.”

Democrat’s fake news that tax cuts must be paid for

This site is my opinion only and is unpaid. I am a retired Paramedic/Firefighter with 25 years of service in the City of Dallas Fire Dept. I have a B.A. degree in Journalism, and A.A. degrees in Military Science and History. I have spent my life studying military history, world history, American history, science, current events, and politics making me a qualified PhD, Senior Fellow of the Limbaugh Institute, and tenured Professor Emeritus for Advanced Conservative Studies. 😄 It is my hope that readers can gain some knowledge and wisdom from my articles.
View all posts by dustyk103 →
This entry was posted in Politics and tagged Barack Obama, Democrat taxes, Donald Trump, Mitch McConnell, Obamaism, RINOs, Tax Reform, Trump undoing Obama's Executive Orders. Bookmark the permalink.