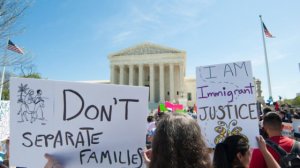 Obama and his Democrazis gave illegal aliens citizen’s rights, and expect Americans to suffer for it on the basis that America has profited off of the suffering of the world.  Mothers throughout history have used guilt trips to manipulate their children into doing what they want rather than teaching them righteousness.  Leftists believe it is justice to give citizenship to those who steal across the border into America, which is tantamount to making any intruder into your house a member of your family.

America became the greatest, wealthiest nation in the world for only one reason – capitalism born of liberty!  The leftist lie that America became wealthy by stealing resources from poor nations is exposed by the fact that all of those “poor” nations are now prospering greatly from doing trade with America.  Fifty years ago, China was a third world country.  Today it has cities bigger and better than those in the USA all because the Chinese are doing trade business with America.  The Middle East is ultra-rich from selling oil to the U.S. and Europe.  And even Vietnam, once America’s enemy, has profited and grown mightily since that war ended all because they trade with the USA.  While the Left damns America, the Right says, “God bless the USA!”

But there are still those who believe America should be subsumed by foreigners and become the world rather than the world learning from Constitutional liberty and becoming America.  America’s immigration system is broken only because Democrats deliberately broke it.  Democrats believe that criminals are “victims of society,” not people with wicked hearts who prey on society.  That’s why they breed criminals, and that is what leads them to believe the poor of the world are victims of America rather than victims of their own evil socialist governments.  As a result, they have enabled organized crime lords to become wealthy politicians and corrupt America’s government as Democrats in Congress.  A prime example is Barack Hussein Obama who knew the law and violated it anyway.  What kind of example did he make?

Fascist Democrazis want to import cheap labor to replace their lagging welfare voter slaves and blame Republicans for denying them freedom to steal from Americans.

Americans want to kill DACA, the Deferred Action for Childhood Arrivals executive order of Barack Obama, commonly referred to by Democrats as “The Dreamer Act.”  It was not an Act passed by Congress, but the dictates of a wanna be king.  The reason Americans rebelled against the Establishment and elected Donald Trump is because Obama, who said it would be illegal for him to dictate immigration law, did not hesitate when Republicans sat back and let him to just that.  Allowing anyone who wants to skim off of American taxpayers is a violation of the law that Obama, the man elected to uphold American law, ignored, circumvented, and abused to make his own law.  Half of Republicans are as guilty as Democrats in abusing immigration law.  They keep saying they want “the best and brightest” from the world, but then allow every deadbeat who wants to prosper at the expense of Americans to come to America to become cheap labor or hit the streets as criminals.  American high school students can’t get starter jobs because Mexicans are the ones mowing yards, flipping burgers, and sweeping floors.  But that’s not the half of it.  Democrats keep saying Republicans ship jobs overseas for cheap labor, but the truth is they ship them overseas to avoid Democrat’s thieving high taxes.  It is Democrats who are importing that cheap labor for the benefit of their own friend’s companies.  And not only unskilled labor, but when it comes to skilled labor Google is having their American employees train their foreign replacements who will do the same job for half the wages.  Republicans campaigned on putting a stop to these practices.  Speaker Ryan was against DACA under Obama and campaigned to abolish it, but under Trump he is now for it!  Who is he trying to appease?  It certainly isn’t Republican voters who voted for the Trump agenda!  The liberal media?  Even if they pass it they will be smeared as doing it for Republican donors to have cheap labor, while Democrats are lauded to the heavens as compassionate wanting to share taxpayer wealth with them.

#1) Stop calling them “Dreamers.”  These are not people longing to live the American Dream.  The American Dream is not dreaming of stealing from taxpayers – unless you’re a liberal.  It is not living in luxury.  Liberals want to bring them in as cheap labor or as welfare voter slaves.  Leftists are talking about robotics replacing all labor and people being given a “universal income,” i.e. socialist redistribution of all wealth through government hands.  The only reason Democrats want them is because they need an underclass to exploit for votes.  If you want to make them citizens then put them at the back of the line and make them earn it like everyone else!  Those who have been committing crimes, including those who have been voting illegally, must go!

#2) Seal the borders; a wall, patrols, and electronics.  Deport illegals!  Those who came in through Ellis Island declared themselves and wanted to become citizens willing to pay taxes, learn English, and work together.  Those who steal across the border take American jobs and ship America money that they should be paying in taxes back to their homelands.  If America is not their homeland then they have no place taking money from Americans.  Everyone must declare themselves at the border.

#3) End anchor babies birthplace citizenship.  No other country in the world does this.  America should be only birthright citizenship for those born of citizens.  This confusion about birthplace vs. birthright is what resulted in the disparity over the citizenship qualifications of Barack Obama and Ted Cruz, both born to American citizens while out of the country.  That’s why Obama was eligible to run for president as was Cruz, but people on both sides argued they were not.  Such arguments would make children born at sea orphans of the world.  There was a time when America benefitted from making children born inside her borders automatic citizens, but that is no longer viable.  America no longer needs to import cheap labor, but to make jobs for her citizens who are the ones suffering.

#4) Do not give sanctuary cities national taxpayer money.  These Democrats who are creating their own toilets of crime and corruption must not be permitted to prosper by the federal government giving them taxpayer money.  People do not work and pay taxes so that thieves and lawbreakers can benefit.  Republicans must also be forced to comply with the law and not hire illegals.  These violators of America law are forcing their corruption on the rest of the nation, not just their own cities that are suffering from worse crime every year.  No doubt the next Democrat president and congress will resort to doing just that. 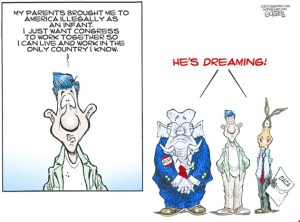 I WILL NOT support the Republicans until they start supporting the president’s agenda for which I voted!  But I will NEVER vote for Democrats!   I will vote in primaries to replace those who Republicans who stand with Democrats like McCain and his Arizona cohort Flake.  Americans want tax reform that includes eliminating the loadstone money pit of ObamaCare and do healthcare reform right.  We want President Trump to deport those illegal aliens that Democrats imported to be illegal voters.  The idea they are “Dreamers” when they’re just the children of thieves is obscene.  That does not confer some higher moral status on them.  The hundreds of thousands of children Obama imported that rode in on top of trains during his second term, who spread disease around the country, and that then called for their parents to be brought into the USA, did not come legally or righteously.  Obama violated American law to subvert the voter system in the most treacherous manner.  Just because fools elected him does not mean anything he did as president was legal.  Nixon tried that argument.  Obama has yet to suffer the consequences of his lawbreaking.

Also do not be dazzled by the stupidity of liberal arguments like, “People are not illegal,” and “They are not aliens from space.”  I am neither dazzled by this idiocy nor guilted by their false accusations of racism or lack of compassion.  This is about people whole steal into the country, who steal jobs, who steal taxes, who steal benefits, who steal votes, and who steal the rights of citizens.  This is about people whom Democrats want to come to America to be their welfare voter slaves while pretending they care about their wellbeing.  The American Dream is not coming to America to become wealthy or live in luxury.  It is to have the freedom to worship God without government persecution and prosper from your own labors without the government stealing it from you.  Democrats have abolished as much of that as they could by persecuting Christians and advancing atheism and Islamism to fight Christianity.  They have spent the last century stealing American’s wealth with their high taxes.  Their “tax the rich” mantra, in which they justify stealing from those who succeed to support their welfare voter slaves, has been a blight on America.  That Americans prospered anyway is thanks to the wisdom of the Founders and the Spirit of America.  Chicago’s mayor, Democrat Rahm Emmanuel, said his city, the most crime ridden and deadliest in the country since the 1960s, rejects Trump’s upholding of American immigration law and welcomes all lawbreakers.  So expect the war between black drug lords and Mexican drug lords to continue.  Expect America to decline once again should the people put Democrazis back into power.  If Republicans will not work with Trump to solve the problems created by Democrats and RINOs then elect better Republicans.  Perhaps we need a party formed by President Trump to undo the damage that Democrazis and their RINO allies have done.  The TEA Party still has a righteous patriotic ring to it. 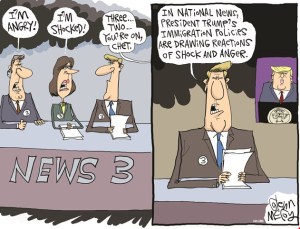 Democrazis – the neo-Fascists of the modern Democrat Party

America is for the world’s dreamers, not the dregs

This site is my opinion only and is unpaid. I am a retired Paramedic/Firefighter with 25 years of service in the City of Dallas Fire Dept. I have a B.A. degree in Journalism, and A.A. degrees in Military Science and History. I have spent my life studying military history, world history, American history, science, current events, and politics making me a qualified PhD, Senior Fellow of the Limbaugh Institute, and tenured Professor for Advanced Conservative Studies. 😄 It is my hope that readers can gain some knowledge and wisdom from my articles.
View all posts by dustyk103 →
This entry was posted in Politics and tagged Amnesty, Cheap labor, DACA, Deferred Action for Childhood Arrivals, Democrat Immigration Lies, Donald Trump, Dreamer Act, Illegal Immigration, Republican Immigration Reform, Trump kills DACA, Welfare voter slaves. Bookmark the permalink.

1 Response to Killing America with Compassion