Getting Burned Out on Eternal Liberal Rage

SSDD – Same sh*t, different day.  Trump lies, Islam is peace, illegals are beneficial, global warming is man-made; these are the cornerstones of liberalism all built on feet of clay, and they make up their daily narrative that is relentlessly drummed into the American psyche day after day.

Is there even a reason to watch the news anymore?  They keep cycling through the same crap over and over and over and over and it is getting to where you can name what wild dumbsh*t claim liberals will make depending on the day of the week!  I could write seven articles and name them according to what BS will be coming out of the mouths of the commie leftists from one day to the next and then just rinse and repeat next week.  It is a not so mystical endless cornucopia of rage, deceit, and stupidity. 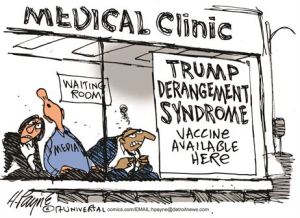 Here’s a rundown of the liberal’s weekly narrative:

What it all amounts to is the leftist formula to unmake America by wrecking her economy and flooding her with foreigners intent on destroying her.  They can only succeed by duping gullible fools that they are doing good and that it is Republicans, not Democrats, who are ruining the American Dream.  Democrats are willing to do anything and everything to tear the country apart and bring America down.  So long as the republic survives they cannot establish themselves as totalitarian rulers, and people would never vote to be slaves, but must be fooled into believing it’s for their own good to save them from thieves.  They can only do this if the people are ignorant and don’t realize that it is the leftist Democrats who are the lying thieves.  If they had their way then the Moral Majority would once again be silent and Republicans would all be too poor to run for office.  If they had their way then America would be like socialist holes like Cuba and China where only those who are loyal to the state prosper and all others are their subjects.  What they have always wanted from the founding of the country is that there be a king and they be his nobles ruling over the peasants.  This is the appeal of Islam where the elites rule over the rabble whose focus is all kept on serving the theocracy even unto death and believing it is their path to paradise.

Donald Trump is a winner who is willing to fight fire with fire making him the right man at the right time so long as he stays on the side of the people who elected him.  If he loses hope, that working with Republicans against the Democrat agenda is not working because liberals, moderates, and conservatives are in too great a conflict, if he loses focus to the point that he believes he must work with liberals to pass his agenda, then the country will be lost.  Trump was elected to stop the liberal agenda!  But it is easy to get frustrated with the obstruction and contentiousness of politicians in Washington.  Getting even different conservative groups to work together is like herding cats.  Here’s hoping that Donald Trump, whom Rush Limbaugh says is not an ideologue, who doesn’t fully realize this is a war between good and evil and it’s do or die time, is at least a man of his word.  Trump voters believe in him.  Pray he doesn’t let the country down.

Trump Voters React to His Attack on Conservatives 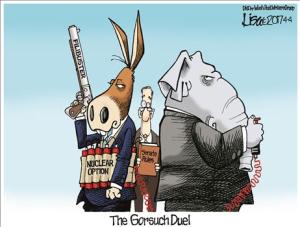 Democrats think they can force Trump from office

Trump Doubles Down — And the Freedom Caucus Makes Him an Offer

Patriotic Democrats Do Not Exist Even in Myth

This site is my opinion only and is unpaid. I am a retired Paramedic/Firefighter with 25 years of service in the City of Dallas Fire Dept. I have a B.A. degree in Journalism, and A.A. degrees in Military Science and History. I have spent my life studying military history, world history, American history, science, current events, and politics making me a qualified PhD, Senior Fellow of the Limbaugh Institute, and tenured Professor for Advanced Conservative Studies. 😄 It is my hope that readers can gain some knowledge and wisdom from my articles.
View all posts by dustyk103 →
This entry was posted in Politics and tagged Climate change, Congressional battle, Democrat agenda, Democrat fraud, Democrats, Donald Trump, Global Warming, Illegals, Islam, Jihad, Leftist media propaganda, Lying Democrat Mainstream Media (LDMSM), Republican disunity, Republicans, Socialism, Trump agenda. Bookmark the permalink.

1 Response to Getting Burned Out on Eternal Liberal Rage