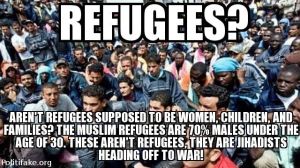 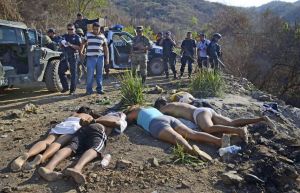 Empires are not conquered from without, but from within.  Democrats are allowing Islamist jihadis and Mexican drug cartels free entry into the USA.

America is following in the footsteps of ancient Rome.  Those who do not learn from history are doomed to repeat it.  Rome fell for two reasons;

We already know that the Washington Establishment is composed of corrupt politicians and bureaucrats whose sole purpose is duping the people with such frauds as global warming, racism, sexism, homophobia, xenophobia, and Islamophobia in order to convince fools to part with their money.  They promise security in exchange for giving them the power to steal from the rich to “share the wealth.”  But all that stealing from the rich accomplishes is reducing jobs as those who run companies take more to replace what the government takes leaving the Middle Class without jobs dependent on government handouts, which amounts to little as they keep the lion’s share of wealth for themselves.  That’s how Washington, D.C. became the richest region in the country under Obama even though they produce nothing but taxes and regulations against business.

The second is by outside invaders who want to steal from their rich neighbors.  There are two ways in which people enter the country of other people; they immigrate with permission or they invade by force or by stealth.  In America and Europe today the latter is being done by stealth and is called illegal immigration.  Leftist Democrats are calling those who broke our laws by invading our country to obtain jobs “undocumented workers” as if they are benign.  But they are not “taking jobs Americans won’t do,” they’re taking jobs that unskilled youngsters would do in order to obtain experience, training, and establish a work ethic.  The minimum wage, initiated by Democrats, is supposed to give those unskilled, untrained, uneducated, inexperienced workers higher pay, but all it does is make employers seek those who are already trained and experienced to get their money’s worth rather than the expense of doing the training themselves.  Minimum wage jobs are starter jobs.  They are not meant to be careers, which is what makes the minimum wage more costly than beneficial to the poor and unskilled.  That’s why employers will hire illegals that they can pay at lower rates.

By the fourth century Roman corruption had become so costly that she did not maintain a strong enough military to guard her borders, so migrating tribes were able to cross her borders and take over her lands.  Back then they didn’t call it “illegal immigration,” just an invasion that they would not defend against.  The Romans made a deal with these immigrants and granted them their lands in exchange for assisting in securing her borders and working their lands.  Does this sound familiar?  In a few decades the result was that there were more foreigners in Rome’s military than citizens.  These people didn’t immigrate to become Romans as earlier peoples had, but rather to take what they could from the Romans they detested.  Eventually they turned on Rome and sacked the city for the first time in eight hundred years.  The Eastern Empire collapsed not long after.

This is what Democrats are doing to America today.  Mexicans and Moslems are not immigrating to America to become Americans, but rather to take from Americans.  Mexicans take jobs and send money back to Mexico.  Moslems demand that Americans submit to their laws of Sharia and threaten to wage war on those who speak out against Islam.  This is not an aberration of radical militants, but the teachings of Muhammad.  It is taught in their mosques in all Moslem countries, which is why you can always hear them chanting, “Death to America the Great Satan.”

Democrats say they are refugees from wars that America started, but this is false.  They are invaders prompted by Obama’s assistance through American funds and weapons to renew the Jihad.  They invade peaceful western nations under the guise of refugees and wage Jihad on them from within.  They are not seeking refuge, but are malicious invaders.  Whether an invader crosses your border armed or not, if their purpose is to subvert your culture and government they are hostiles and should be treated as such.  Democrats give them citizen’s rights and benefits, Republicans are not contesting their actions, which is why the people elected a businessman to take care of the business of the country.

Leftist psychotics are calling for Trump’s impeachment over his immigration ban declaring that he is insane.  The judge who put a stay on Trump’s EO restricting travel from seven Moslem countries acted outside the law without even referring to the law that gives President Trump absolute authority to do what he did.  If Trump wanted to ban all Moslems from coming to America he could and he should!  Islamist do not come to America to become Americans, but to steal from America and subvert the worst of her people.

Other articles about illegal immigrant and Islamist invasions;

In answer to Meryl Streep’s hypocrisy

Netherlands PM candidate betrayed by Moslem on his security detail

This site is my opinion only and is unpaid. I am a retired Paramedic/Firefighter with 25 years of service in the City of Dallas Fire Dept. I have a B.A. degree in Journalism, and A.A. degrees in Military Science and History. I have spent my life studying military history, world history, American history, science, current events, and politics making me a qualified PhD, Senior Fellow of the Limbaugh Institute, and tenured Professor for Advanced Conservative Studies. 😄 It is my hope that readers can gain some knowledge and wisdom from my articles.
View all posts by dustyk103 →
This entry was posted in Fundamentals, Illegal Immigration, Islamism, Politics and tagged Democrats advocate for Jihad, Democrats encourage illegal immigration, Democrats for refugees, Donald Trump, Illegal Immigration, Islam, Islamic invasion, Jihad, Mexican drug trade, Open Borders, Refugees, Sharia, Trump's Wall. Bookmark the permalink.

5 Responses to How illegal immigration ended the Roman Empire