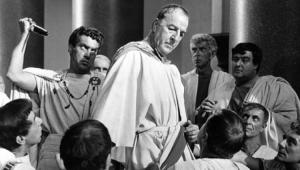 Establishment Republicans are joining with their Democrat buddies in launching an attack on Trump over Flynn that is meant to set up his impeachment.  Today is the Ides of February and Trump has yet to have his full Cabinet seated before one of them is ousted.

The RINOs that wouldn’t impeach Obama over his multiple violations of the Constitution are setting the table to do so to outsider Donald Trump who threatens to overturn their sandbox.  The Establishment detests having Trump as President and would happily divest themselves of his unwanted presence so they could get back to the business of fleecing the poor dupes that voted for them.  Democrats are accusing Flynn of colluding with the Russians to hack the election, and because of his removal are demanding to know what Trump knew about this and when did he know it!  Republicans allying with the Democrats are leading the charge to make an investigation of the bogus claims.  Either they have learned nothing about how to deal with the leftwing media that despises them, or they are showing their true colors as turncoats.

The Political Assassination of Michael Flynn

In 44 B.C. after winning the Roman civil war, Julius Caesar sought to unite the warring factions under his rule.  Rather than eliminate his political opposition he instead sought to placate them.  This only resulted in his assassination.  With the political assassination of one of Trump’s Cabinet members before his Cabinet is even fully established the sharks in Congress smell blood in the water.  The leaks coming out of the Trump administration are at a virtual flood stage.  Liberal hacks claim Flynn was open to blackmail by the Russians and that they suspect Trump has been conspiring with Putin.  For those of us who have the intelligence to remember beyond yesterday this is hysterically funny coming from the leftwing hysteria in the media.  Their simpleton supporters may have forgotten, but we remember Obama on a hot mike telling Putin’s representative that he would be much more flexible to do Putin’s bidding after his re-election in 2012.  And none of us have forgotten that Hillary Clinton was paid hundreds of millions of dollars by the Russians to her foundation and for her husband to make speeches in Russia.  Talk about open to blackmail?  She actually sold his campaign to the Russians, Chinese, and Arabs!

Rush Limbaugh, the Sage of our day, has his recommendations for President Trump on how to combat and upset the plans of those who would undermine his administration.  That advice is to plow full speed ahead with his agenda and don’t allow the Democrats, RINOs, and leftwing media to waylay him again!  Obama is out community organizing agitators and rioters, while the bureaucratic and judiciary saboteurs he put in place do their best to stall the Trump Train and cause it to backslide down the mountain.  Sean Spicer announced that Gen. Flynn had broken no laws, only lost the confidence of the president, but that won’t stop the Democrats and GOP Establishment from doing what they can to derail the upstart businessman who has vowed to be the man of the people just as Caesar had two millennia ago.  Let us pray he does not suffer the same fate.

How Trump can beat the Shadow Government

Democrats Organize a ‘Grassroots’ Anti-Trump Party Paid for by Obamaites

This site is my opinion only and is unpaid. I am a retired Paramedic/Firefighter with 25 years of service in the City of Dallas Fire Dept. I have a B.A. degree in Journalism, and A.A. degrees in Military Science and History. I have spent my life studying military history, world history, American history, science, current events, and politics making me a qualified PhD, Senior Fellow of the Limbaugh Institute, and tenured Professor for Advanced Conservative Studies. 😄 It is my hope that readers can gain some knowledge and wisdom from my articles.
View all posts by dustyk103 →
This entry was posted in Politics and tagged Democrat sharks, Donald Trump, Flynn resignation scandal, GOP Establishment backstabbers, Obama's shadow government, Trump Administration, Trump agenda, Trump Train, Trump undermining sabotage, Trump's Cabinet. Bookmark the permalink.

1 Response to CAESAR, Beware the Ides of March!  GOP Establishment turns on Trump