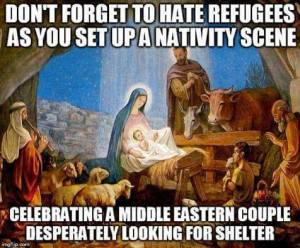 Liberal logic fails every time they try to make a point.

“Don’t forget to hate refugees as you set up a Nativity scene celebrating a middle-eastern couple desperately looking for shelter.”

In the dysfunctional logic of the Left, because Mary and Joseph were from the Middle East and sought a place to sleep in Bethlehem, they are “refugees” who gave birth to the Son of God.  Therefore, Americans should welcome Moslem refugees because they are from the Middle East and may produce the next Messiah.  This kind of logic is the same as thinking that everyone who sneaks across America’s southern border is looking for help and ignores the fact that murdering drug dealers and terrorists are sneaking in as well.  It’s the kind of dysfunctional liberal logic that comes to erroneous conclusions;

Leftists always make statements like this that are based on false premises.  The meaning of this is obvious.  When they refuse to acknowledge their dysfunctional logic you should always call them out on it!  They will always resort to name calling telling you you’re too stupid to understand it and are hateful and lack compassion.

For a Christian to believe that the Messiah may return through Islam, which is an ideology that fundamentally rejects Jesus as being the Son of God, Savior, and Messiah, is to reject everything the Christ ever taught, especially about following False Prophets.  Islam’s 12th Imam is taken from the Bible Book of Revelations.  In the Bible the AntiChrist will attempt to subvert the world to turn them away from God to Satan.  In Islam they teach that Jesus will reject the God of the Bible and bow to Allah.

Liberals are confused about the God of Abraham, father of Isaac by his wife Sarah from whom Jesus is descended, and his son Ishmael by her handmaiden Hagar from whom Muhammad claims descent.  Because of this they believe God and Allah are one in the same.  But the Father of Christ who is known as the Son of God is obviously not the same as Allah of the Prophet of Islam who says God had no son.  Where Jesus died for man and extolled peace, Muhammad waged war to establish his dominion.  His teachings include brainwashing techniques that have enslaved billions of people to this day.  Islam is actually the ultimate socialist utopia in which all the people are the same.  They think the same, act the same, and those who deviate from being the same are killed as apostates.

The evil and ignorance of Islam 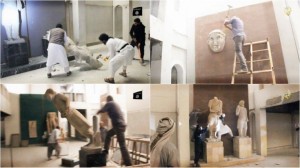 Their ignorance is displayed in their wanton destruction of historic artifacts by Islamists like monkeys attacking man’s machines.  They take pictures of themselves on their iPhones destroying “evil western tech” and then post it on the Internet!  Moslems want there to be no history other than what they say.

Christianity has a history of killing 10 million people during the six centuries of the Inquisition.  But churches have not always followed the teachings of Christ.  They resorted to the tactics of Islam while engaged in war with them during the Dark Ages and Medieval Era to stop their advance.  Christians eventually rebelled and put a stop to the wars and oppression of the Catholic Church, and they crushed the Jihad through technological advances in weapons that nullified fanaticism.  In contrast, atheism killed over a hundred million in the 20th century alone, and Islam has killed a billion people in the Jihad over the centuries.  Each of the latter two has enslaved ten times that number.

The death toll from Islam is impossible to count.  The total in this article doesn’t count how many have been killed within Islam as honor killings, apostates, or perverts.

Islam has massacred over 669 million non-Muslims since 622 A.D.

Moslems who have invaded Europe supposedly as refugees, the same people Obama and Hillary want to bring to America, are not immigrating to the west to escape war.  They are part of an insurgency to subvert western culture and make the world Islam.  They cannot succeed militarily, but they can succeed through social corruption and terrorism.  Those “refuges” are raping and rioting their way throughout Europe and the people are rebelling against their leaders who are only bowing to Obama’s demands.  No Moslem countries have taken in any of these refugees.

Islamists coming into the West are not immigrants, but insurgents

Don’t be fooled by a beggar’s hand when the one behind his back holds a knife.

Muhammad the First Terrorist and his religion of self-imposed brainwashing

Hillary Takes Orders from Muslims in our War against Islam

This site is my opinion only and is unpaid. I am a retired Paramedic/Firefighter with 25 years of service in the City of Dallas Fire Dept. I have a B.A. degree in Journalism, and A.A. degrees in Military Science and History. I have spent my life studying military history, world history, American history, science, current events, and politics making me a qualified PhD, Senior Fellow of the Limbaugh Institute, and tenured Professor for Advanced Conservative Studies. 😄 It is my hope that readers can gain some knowledge and wisdom from my articles.
View all posts by dustyk103 →
This entry was posted in Election 2016 and tagged Christianity, Dysfunctional thinking, Liberal logic, Liberalism, Moslem refugees, Muslim immigrants, Propaganda, Syrian migrations. Bookmark the permalink.