Trump has never sexually harassed a woman unlike the Clintons 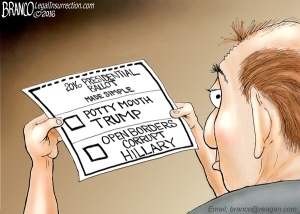 Trump is guilty of being a man.  The Clintons are guilty of rape, corruption, and other crimes.  Liberals say Trump should be executed for his words, but praise Bill and Hillary for corrupting justice.

Donald Trump is seventy years old and has been in the public eye for most of it.  In all that time not a single woman has ever come forward to say Trump acted sexually inappropriate with her in any way, unlike Hillary Clinton who had her husband accused of sexually harassing, molesting, and even raping women.  But because he was Governor of Arkansas and President of the United States, she made certain the Attorneys General brought no charges against him.  Liberals say this is proof of innocence when it is proof of corruption.

No doubt after Trump denied ever molesting women in the second debate and humiliated Hillary by bringing Bill’s victims to the event, Hillary has her team out looking for any woman they can pay to make those charges before the election.  They did it to Herman Cain during the primaries of 2012 when they got a woman who lived in the same New York apartments as Obama’s campaign manager to claim Cain had an affair with her.  Cain dropped out because the dirty sewage of Democrat political campaign smears was too hurtful for his wife.  They did it to Mitt Romney claiming he took away the medical insurance of an employee whose wife was dying of cancer.  Romney failed to counter that lie with the truth that the woman had her own health insurance and didn’t need her husband’s.  They even convinced ignorant fools that Romney abused his dog. 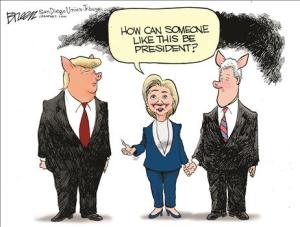 As they always do when they launch their false attacks, when their target defends themselves they claim ‘there must be something to it if he’s defensive.’  If their victims don’t fight back then they claim victory.  It’s the same when the leftwing media puts out their phony polls trying to sway public opinion rather than reflect it.  With liberals you are always set up to be damned if you do and damned if you don’t.

In liberalism the righteous are always guilty until proven innocent.  But when it’s their own people then they’re always innocent even when proven guilty.  This is what causes cowards and the naïve to be fearful of the Democrat propaganda machine.  These Republicans who abandoned Trump are spineless, faithless politicians.  Trump is beginning to understand just how rigged the system is and speaks out against it.  Hillary actually had the gall to come out and say about Trump’s locker room speak, “That’s not how we talk in our locker rooms.”  Hillary, you lying old skank!  Your own husband even bragged about how you “ate more pussy than [he] did.”  For someone who says she’s the champion of gay and women’s rights, why is she so ashamed to admit her own homosexuality and that her marriage is just a sham to cover it up?

All of this is just a distraction to take the ignorant independent’s eyes off the real issues of Democrats killing our energy and inviting Islamo-Nazism into America.  Here’s a list of things you should know before you vote:

Socialists stick their greedy hands up the Golden Goose’s A$$!

Agent of Change vs. the Queen of Corruption

This site is my opinion only and is unpaid. I am a retired Paramedic/Firefighter with 25 years of service in the City of Dallas Fire Dept. I have a B.A. degree in Journalism, and A.A. degrees in Military Science and History. I have spent my life studying military history, world history, American history, science, current events, and politics making me a qualified PhD, Senior Fellow of the Limbaugh Institute, and tenured Professor Emeritus for Advanced Conservative Studies. 😄 It is my hope that readers can gain some knowledge and wisdom from my articles.
View all posts by dustyk103 →
This entry was posted in Election 2016 and tagged 2016 Presidential Campaign, Donald Trump, Elections 2016, Hillary Clinton, Hillary corruption, Hillary war on America, Presidential campaign scandals, Trump sex scandal, Trump war on women. Bookmark the permalink.