Why the GOP would rather have Hillary or a Democrat Congress 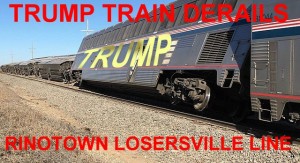 GOP elites jumping off the Trump Train over Democrat propaganda is more than just a sex scandal.  No one ever said Republicans must be virginal except the party of perversion.

NeverTrumpers of the GOP Establishment elites who haven’t thrown in with Hillary are still hoping Trump implodes.  If he does not and “by some miracle” Trump wins the election, they are simultaneously doing their best to sabotage themselves in the eyes of Republican voters so that Democrats take their places in Congress.  Usually, Republicans down the ticket ride the coattails of the ticket leader, but not this time.  Why is that?

Corruption in Washington has reached epidemic levels and they would do anything to keep Trump from busting up the Washington Cartel.  This is reminiscent of Romney in the last week of the campaign stepping back as Superstorm Sandy ripped through the northeast.  Rather than standing forth, he let Obama take the lead and watched as Christie kissed his ring and declared him to be “presidential” and Romney went down in flames.  Obama’s record of tearing down America for four years was not enough to stop his re-election in the face of Romney’s self-sabotage.

Now the same people who stuck it to us in 2012 are saying they won’t support Trump.  They say Trump will do the same, that he’s a Democrat and morally corrupt and Democrats say the same thing.  Whose side are they on?  They’re on their own side and we boobs who vote are not cooperating with their propaganda.  People are supposed to believe the global warming fraud and give the government more money to save the world.  They’re supposed to reject Christian morality and at least embrace Islamic morality if they won’t bow to the godless.  The way they see it, if they cannot abolish the “opiate of the people” then at least Moslems can be brainwashed to obedience to all think and act the same like the Borg from Star Trek.

If you can’t beat godliness then usurp it.  If you can’t steal money then convince the fools to give it to you.  If you can’t have it your way, then throw in with the other guy whom you only oppose for show.  What is that conspiracy theory in Zeitgeist?  Republicans and Democrats are perpetrating a fraud on the people pretending to be on opposite sides, but in reality they are conjoined to milk the taxpayer.  No argument here.

For Trump the gloves are off against both Hillary and the GOP!  He recovered from this kerfuffle magnificently.  What is the real fear of Republicans?  Perhaps it’s that Trump will actually do what they keep claiming they will do – audit the Fed!  Since Democrats created the Federal Reserve national bank, the very thing Washington and Jefferson warned America not to allow to be created, our economy has fluctuated according to what they do and not what the market does.  So Republicans would rather have Democrats who keep their gravy train running taxing, spending, and borrowing until America is bankrupt because they will not be the ones who are left in the poor house of debt slavery.  Why else would they not want to be the ones in charge? 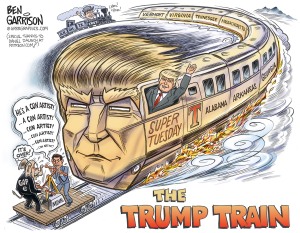 Gov. Huckabee ‘GOP not afraid Trump will lose, but that he’ll win!’

Leave it to the GOP Establishment to work on snatching defeat from the jaws of victory once again.

Jumping off the Trump Train

This site is my opinion only and is unpaid. I am a retired Paramedic/Firefighter with 25 years of service in the City of Dallas Fire Dept. I have a B.A. degree in Journalism, and A.A. degrees in Military Science and History. I have spent my life studying military history, world history, American history, science, current events, and politics making me a qualified PhD, Senior Fellow of the Limbaugh Institute, and tenured Professor for Advanced Conservative Studies. 😄 It is my hope that readers can gain some knowledge and wisdom from my articles.
View all posts by dustyk103 →
This entry was posted in Election 2016 and tagged 2016 Presidential Campaign, Donald Trump, Elections 2016, GOP jumps Trump Train, Presidential debates 2016, Republicans bail on Trump, Trump sex scandal, Trump Train. Bookmark the permalink.