Morality Wars of Trump and Clinton 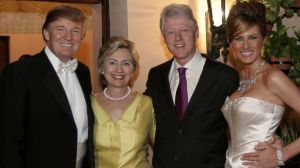 WOE!  OH, WOE, WE ARE UNDONE!  (They pray.)  The GOP is ready to throw The Donald under the bus at the demand of the Feminazis in a pathetic display of wimpiness condemning Trump for being a man.

Hillary Clinton has already lost this campaign on the economy, foreign policy, and the military.  She has nothing to offer but higher taxes, importing illegals as cheap labor and giving them citizen’s rights, and submitting to Islam.  All that’s left to her campaign is smears, slanders, and voter fraud.  The GOP’s disgusting display of cowardice and treachery, demanding Trump apologizes to the Feminazis and their male b*tches for being a man, is enough to turn every patriot’s stomach.  The GOP is looking for any reason to vote for Hillary and keep their gravy train going, willingly serving under the corrupt mantle of Democrats who are stealing away America’s wealth telling their useful idiots it’s their civic duty.

Liberal’s disgusting display of immorality is on full display.  Atheist’s declaring their purity is the ultimate in self-righteous hypocrisy.  How is it always the most ungodly people who are always “holier than thou?”  In America you are innocent until proven guilty.  But in the liberal world you can rape a woman, but if your friends in the Department of Justice do not charge you with a crime despite proof of your guilt, then you are innocent.  But if a conservatives says he would f*** a woman who wants to commit adultery with him then it’s a capital crime!  This is a sickness of the dysfunctional immorality of the liberal mind that the crime of rape can be declared innocence while a common sin can be declared a capital offense.

Bill Clinton was impeached, not because he had sex with an intern in the White House and got caught and was forced to confess to the people, but because he lied under oath in the congressional investigation.  Hillary was caught violating National Security and destroying evidence, but even though she lied to the American people she told the truth under oath to the FBI.  Just because she has a ‘D’ by her name the DoJ refused to prosecute her.  Since when has “ignorance of the law” ever been an excuse, especially when she has spent twenty years at the top of government in Washington and claims doesn’t recognize classified markings on a document?  On that basis liberals claim she is innocent like they say her husband is innocent.

They say her husband, whom she protected from all of his adulteries by destroying his accusers, who was impeached, and who is now not only has multiple adulteries but is a regular visitor to Pedophile Isle, isn’t on the ticket, so Hillary is pure.  Hillary and Bill come as a pair.  If Melania Trump were whoring about you can bet they would declare Trump unfit because of her.  Oh, wait, they already did that when they published nude photos of her from when she was a model trying to slut shame her.

When Democrats are found out committing crimes, misdemeanors, and sins they close ranks and protect their own, e.g. Rep. Barney Frank who was found out to have a male prostitution ring running from his home.  Republicans, on the other hand, immediately throw anyone with a hint of scandal under the bus like Rep. Larry Craig for tapping his foot in a bathroom stall.  This isn’t righteousness, but weakness.  When Democrats are guilty of crimes they protect each other, while Republicans act as if they must be pure as the driven snow.  You can’t win a war by giving the enemy your swords and shields.

This is the world in which we live where Republicans must be without sin and Democrats are two-faced skanky tramps that get away with murder, not because there is no proof, but because they have friends in high places.  The pinnacle of corruption and poster children of immorality is the American Left.  Thank God Donald Trump is a man with bigger balls than Hillary, but at this point no one can be sure if Republican voters have more sense than dumbed down Democrats.  This is why it can be truly said that if Jesus Christ were on the ticket, all Democrats and half of Republicans would vote Him down.

The morality of choosing not to support Trump

Subscribe to iPatriot.com to see more of my articles.  Stay informed!

Next presidential debate another forum for Hillary

This site is my opinion only and is unpaid. I am a retired Paramedic/Firefighter with 25 years of service in the City of Dallas Fire Dept. I have a B.A. degree in Journalism, and A.A. degrees in Military Science and History. I have spent my life studying military history, world history, American history, science, current events, and politics making me a qualified PhD, Senior Fellow of the Limbaugh Institute, and tenured Professor Emeritus for Advanced Conservative Studies. 😄 It is my hope that readers can gain some knowledge and wisdom from my articles.
View all posts by dustyk103 →
This entry was posted in Election 2016 and tagged 2016 Presidential Campaign, Clinton's rapes, Donald Trump, Elections 2016, Hillary Clinton, Hillary October Surprise, Presidential debates 2016, Trump October Surprise, Trump's language. Bookmark the permalink.

1 Response to Morality Wars of Trump and Clinton