Democrat lies pulled out of their butts that people swallowed whole 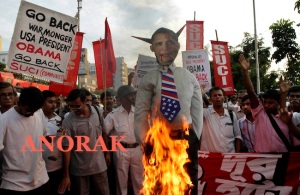 Democrats perpetuate numerous frauds on the American people that have no basis in reality from defaming the TEA Party as the KKK, the Republican War on Women, to the “hands up, don’t shoot” Michael Brown.  Democrat propaganda has become so pervasive, that even the most obvious lies are accepted as truth by low-information voters.  The success of the Democrat propaganda machine is so absolute in the minds of their followers that no amount of proof can dissuade them from being dupes, proving Lincoln right.

Democrat frauds invented to tax the people are so easily exposed, yet Democrats believe them.  Even more incredible are Democrat lies created from nothing to damn Republicans and the TEA Party.  Each of these frauds was created by the Left with no proof and no basis in reality, yet Democrats believe these fictions as fact proving that the liberal mind is governed by dysfunctional thinking.

The TEA Party is the KKK

How did this smear begin?  The TEA Party came to the attention of the American people when Obama and the Democrats signed a $1.5 trillion deficit and proposed raising taxes through Affordable Care Act.  The TEA Party was not born in 2009, but began in 1773 with the Boston Tea Party raid and was the primary vision of the Founders who were all TEA Party people.

The foundational principle of the TEA Party is being free from an oppressive government that taxes the people so much that it keeps them poor.  In 1776 a tax of ten percent was enough that people would starve.  Prior to the 20th century and the imposition of Income Tax by Democrats, people only paid 7% in taxes to fully fund the government.

In 2009, when more than 40% of their money goes to government in taxes, people are living better than ever.  They live so well, in fact, that a third of the population doesn’t have to work and can live off of welfare in all its forms quite well.  Still, when even the poorest of people are paying these taxes, Americans are being duped into believing that taxing the rich is the way Democrats are increasing revenue.  In reality, the frauds of ObamaCare, Global Warming, and amnesty for illegal aliens are being funded by taxpayers in ways most don’t comprehend.

Taxes were originally acquired through businesses.  Government would tax the business and business would increase the cost of their products people would buy.  This is why the British Crown increasing tax on tea upset everyone.  Today people are largely clueless about any taxes besides sales tax and income tax.

Income tax is actually double taxation.  People are taxed on the money they make and then again on money they spend.  While this is supposed to fund government operations to serve the people, Democrats figured out during the 20th century how to get people to give them six times more in taxes.  In doing so, they claim they are taking more from the rich, but then they give their rich friends tax loopholes by which to avoid paying those extra taxes.

How did the TEA Party become the KKK?  Ray Rangel (D-N.Y.) admits that the southern Democrats who lost the Civil War formed the KKK.  Then he claims that these “Dixiecrats” became Republicans after the Civil Rights Movement of the sixties and have morphed into the TEA Party that consists of people who only object to Obama’s policies because he’s black.

Rangel’s entire hypothesis is based on the belief that; 1 – the TEA Party people would not object if Obama were a white man spending $1.5 trillion in taxes the government does not have, raising taxes to pay for his crony capitalism, and 2 – that Republicans in the North and South became Democrats.  All it takes to disprove this ridiculous assertion is knowing some history which, unfortunately, most Americans take no time to do.  While the Democrat Party has grown in the North as did the Republican Party in the South, the people that compose those parties did not swap their beliefs.

Republicans still stand for the people being protected by government and not oppressed by it, while Democrats stand for government taxing the people to the point of stealing from those who make the most and giving to those who will vote for them.  The entire propaganda machine that has taken hold in the hearts of desperate and greedy Americans that Republicans are for the rich and Democrats are for the poor is just so much smoke and mirrors.  The proof of this is in the crony capitalism of Democrats that has reached epic proportions.

Democrats have been borrowing over $800 billion a year to give to their Wall Street buddies under the title of “quantitative easing.”  The so-called bail-outs, stimulus, and Omnibus bills were all means by which they took taxpayer’s money and gave it to their friends.  In addition to those are subsidies to “green energy” companies that are all failing, ObamaCare, and now amnesty for illegal aliens to take the place of Democrat voters who are learning how they have been duped.

Nowhere on the face of the planet is there a Republican who even hinted at wanting to take birth control away from women, yet this was made a major issue in the 2012 presidential campaign by the Democrat media.  This fabrication is so patently obvious that there is no need for an explanation of how it works.  Democrats simply started this rumor at a debate between Republican primary candidates with George Stephanopoulos asking Mitt Romney about it.

Romney was so flustered by the question that he kept asking Stephanopoulos, how did this question originate?  The answer is it originated behind closed doors of the Democrat campaign to smear Republicans as being anti-women.  This propaganda was nothing more than an outright lie, but Democrats, being the people about whom Lincoln, “You can fool some of the people all of the time,” swallowed it hook, line, and sinker and run with it to this day.

The day that Michael Brown was shot in Ferguson, Mo., Democrats immediately began the story that he was shot in the back while kneeling with his hands up in surrender.  That lie was disproved by several months of Grand Jury hearings examining the physical evidence and hearing witness testimony from everyone who had anything to say about the case.  Despite undisputable proof that he was shot while charging at the officer after fighting with him in an unsuccessful attempt to get his gun, Democrats around the country are holding their hands up in support of this criminal.

To add insult to injury, Democrats around the country have been staging protests that often become riots, destroying the property of thousands of innocent people, saying it is their right.  Equating their support for a criminal and their own criminal actions with the Civil Rights Movement, these lawless, evil people are rampaging, looting, burning, and even murdering innocent people.  Martin Luther King, Jr. and his brethren are spinning in their graves at the injustice and wickedness of these people who say they act in his name.  This smear of MLK who stood for peace by rioters who stand for hate is the lowliest of shams they can possibly commit.

Liberals condemn black pastor for speaking out against Ferguson riots

What is your American Dream?

In this day and age with the volume of knowledge to be attained through education and the Internet, Americans have no excuse for being the dupes of the Democrats.  For all their claims of being for the good people, the oppressed, the destitute, and the needy, all of their programs and propaganda are only geared toward one goal.  Democrats are responsible for sucking more wealth out of the hands of hard-working Americans, and those Americans are willfully following them in their ignorance, believing what they are told rather than examining what the people for whom they vote actually do.

This site is my opinion only and is unpaid. I am a retired Paramedic/Firefighter with 25 years of service in the City of Dallas Fire Dept. I have a B.A. degree in Journalism, and A.A. degrees in Military Science and History. I have spent my life studying military history, world history, American history, science, current events, and politics making me a qualified PhD, Senior Fellow of the Limbaugh Institute, and tenured Professor for Advanced Conservative Studies. 😄 It is my hope that readers can gain some knowledge and wisdom from my articles.
View all posts by dustyk103 →
This entry was posted in Conservatism vs. Liberalism, Obama's legacy, Right vs. Left and tagged Democrat agenda, Ferguson riots, Hands up don't shoot, Republican War on Women, TEA Party. Bookmark the permalink.