Adam Schiff’s Head on a Pike

In the Trump impeachment trial, Democrats have had nothing new to say besides that which they say in their daily speeches to the people slandering Trump and demonizing Republicans.  Spending three days repeating each other with the same opinions and admonishments without presenting a single convicting fact by which to impeach Trump was an exercise in tedium.  Leftist media’s raving over them is similar to efforts by the Academy of Motion Pictures giving Oscars to crappy films to overcome their box office failures.  Republicans gave a quick summary of exculpatory evidence proving that President Trump is still the subject of a witch hunt by Democrats enacting a coup rather than a Constitutional defense of the people.

By every measure known, Donald Trump has made America greater than any previous administration in any living American’s lifetime.  The fact that Obama’s managing America’s decline through his dictates is partly the cause for this by his oppressing America.  That there is a Republican Congress that semi-worked with Trump rather than a hostile Democrat Congress like Reagan had is another part.  That Democrats enacted 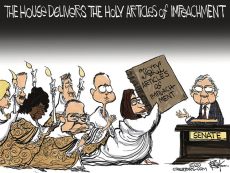 massive voter fraud to steal back the House through fraudulent provisional ballots, ballot harvesting, and falsifying census records is an indicator of just how far Democrats will go to steal back power.

Adam Schiff (D-CA) and Jerry Nadler (D-NY) are two of the coup’s leaders.  Democrats are demanding that witnesses be called in the Senate to testify because they know the case that they brought, which they claim is “overwhelming proof of crimes committed by Trump,” is an empty sieve of lies.  That they think Bolton could prove what they cannot is as vacant as their denials of their own crimes.  If the Senate should bring in witnesses to testify against Trump, then Republicans can and must call witnesses to testify against Democrats. 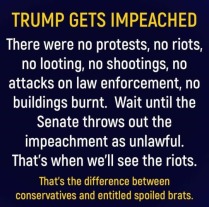 crimes.  If such testimony doesn’t result in Schiff and Biden having their heads put on a pike and sent to prison, then there is no hope that America will be able to overcome Democrat’s march to tyranny.

Just using this as a campaign finance tool to punish them at the ballot box is an empty gesture when their voter fraud is overcoming the people’s ballots.  Democrats are giving the vote to foreign communist invaders, domestic criminal felons they pardon, and their dupes who have been indoctrinated to hate America.  That so many millions of people are willing to put aside their intelligent judgment to accept whatever they are fed by Democrats is an indication of what percentage of the population are lemmings that can be ruled.  Those who hold their leaders accountable to govern them will be swept aside and put in concentration camps to be “re-educated” along the Chinese/Russian model of communist dictatorships as deemed necessary by Sander’s campaign people.

Thank God This is Trump’s Economy Fighting the Washington Cesspool

This site is my opinion only and is unpaid. I am a retired Paramedic/Firefighter with 25 years of service in the City of Dallas Fire Dept. I have a B.A. degree in Journalism, and A.A. degrees in Military Science and History. I have spent my life studying military history, world history, American history, science, current events, and politics making me a qualified PhD, Senior Fellow of the Limbaugh Institute, and tenured Professor Emeritus for Advanced Conservative Studies. 😄 It is my hope that readers can gain some knowledge and wisdom from my articles.
View all posts by dustyk103 →
This entry was posted in Democratic socialism, Elections 2020 and tagged Adam Schiff, Democrat Crimes and Corruption, Democrat voter fraud, Donald Trump, Eric Ciaramella, Hunter Biden, Jerry Nadler, Joe Biden, Trump Impeachment Trial. Bookmark the permalink.

1 Response to Adam Schiff’s Head on a Pike