Mueller Probe is NOT a Vindication of the American Justice System

‘Mueller bombs’ is the irony of the century!  People are saying that the Mueller investigation of Trump-Russia collusion on the basis of a fraudulent document that was used to illegally obtain FISA warrants has “vindicated” the American justice system.  No, it has NOT!  It convicts the system that has been thoroughly corrupted by Democrats!  Even now, in the light of Trump’s exoneration being PROVEN INNOCENT, liberals still hold him guilty of crimes he never committed!  Bill Maher publicly said that, despite the collapse of the left’s attempted coup, he believes Donald Trump is still a traitor.  Never mind that Barack Obama funded ISIS.  This is the proof that this investigation was never about uncovering a crime but about Democrats attempting to overthrow the duly elected President of the United States.

An investigation into the investigators and all those Democrats in the government, justice department, and FBI should now be handed indictments for their conspiracy to overthrow the United States government.  This isn’t an investigation that should just be starting but should be concluding.  It should have been begun by Sessions.  The fraud of the Steele Dossier and FISA warrants has been publicly know for almost as long as Mueller’s investigation has been operational.  It doesn’t take two years to investigate anything!  Everything necessary to reach conclusions is known within a couple of months.  Mueller’s microscopic anal probe of the Trump family failed to find any crime by which they could even fraudulently charge them as they did so many Trump supporters.

The only reason they have any convictions is because they lied about witnesses lying to the FBI and then overwhelmed their legal finances with taxpayer money.

But don’t count on any of these treacherous criminals being brought to justice until the Democrats and their RINO allies are out of power.  America needs Republicans who will work with the president rather than with Democrats.  Men and women who will fulfill their campaign promises to the people and not be part of the corrupt Washington elite.  Until that comes to pass, until these Democrat usurpers are brought to justice, the FBI weeded of Democrat operatives, and the media cleansed of activist propaganda, America will remain in danger of falling into the darkness of socialist tyranny.  The left keeps saying Trump is not above the law.  They keep saying he is guilty.  They say that not finding evidence is not proof of innocence.  What then is when someone undergoes an investigation into their entire lives?  There would certainly be something to be found.  President Trump has been proven to obey the law in its entirety.  It is Democrats who must be held to account and brought to justice.  Let’s see them undergo the same scrutiny as they inflicted on President Trump.  Freedom will not ring in America until this happens. 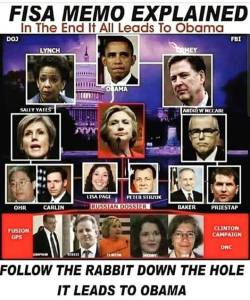 Save Yourself from Mueller Mayhem

This site is my opinion only and is unpaid. I am a retired Paramedic/Firefighter with 25 years of service in the City of Dallas Fire Dept. I have a B.A. degree in Journalism, and A.A. degrees in Military Science and History. I have spent my life studying military history, world history, American history, science, current events, and politics making me a qualified PhD, Senior Fellow of the Limbaugh Institute, and tenured Professor for Advanced Conservative Studies. 😄 It is my hope that readers can gain some knowledge and wisdom from my articles.
View all posts by dustyk103 →
This entry was posted in Elections 2020, Politics and tagged Democrat Conspiracy to overthrow President, Democrat Coup, Donald Trump, Mueller Bombs, Mueller Investigation concludes, No Trump-Russia Collusion, Trump Exonerated. Bookmark the permalink.