Democrats expand definition of “hate crime” to include being a Republican 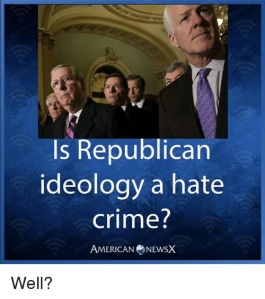 Democrats are now labelling the words “illegal aliens,” “illegal immigrants,” (or even the words illegal or foreigner or non-American) as “hate speech.”  What’s next?  Declaring the words “criminal” and “leftist” to be “hate speech?”  Next thing they’ll do is say that being a Republican is a crime.  Oh, wait, they already do!  Shades of Nazi Germany!  Democrat’s use of the term “hate speech” is hate speech. 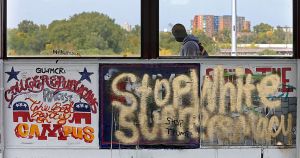 How many crimes have Democrat politicians committed in the last two years that have gone, not only unpunished, but uninvestigated and unprosecuted?  They have manufactured Republican racism slandering the entire party and their voters as Nazis of the KKK.  The #MeToo movement found a home in the Democrat Party where the vast majority of sexual predators reside.  Hillary and Obama successfully defrauded the FISA court to illegally spy on the Trump campaign.  Democrats have been encouraging riots at free speech events and the assassination of police.  Has anyone been hanged for these acts of treason? 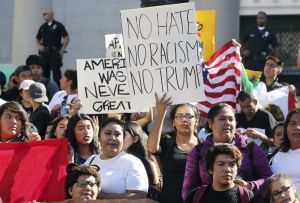 The swamp is wide and deep, and the deep state is keeping the law at bay by threatening Trump with impeachment should he dig too deep.  Just because Republicans have the majority doesn’t mean righteous conservatives do.  NeverTrumper Republican’s careers need to be buried alongside McCain.  There are still far too many senators and representatives who stand with Democrats against the right.  President Trump is doing what Republicans have been begging the GOP to do since Reagan and he needs a Congress that will work with him rather than with the Democrats.

Democrats say no Republican is “qualified” to hold office

The many (non)crimes of Donald Trump

This site is my opinion only and is unpaid. I am a retired Paramedic/Firefighter with 25 years of service in the City of Dallas Fire Dept. I have a B.A. degree in Journalism, and A.A. degrees in Military Science and History. I have spent my life studying military history, world history, American history, science, current events, and politics making me a qualified PhD, Senior Fellow of the Limbaugh Institute, and tenured Professor Emeritus for Advanced Conservative Studies. 😄 It is my hope that readers can gain some knowledge and wisdom from my articles.
View all posts by dustyk103 →
This entry was posted in Elections 2018 & 2020, Politics and tagged American Nazis, Democrats Criminalize Republicans, Donald Trump, Hate Crimes, Hate speech, Racism. Bookmark the permalink.