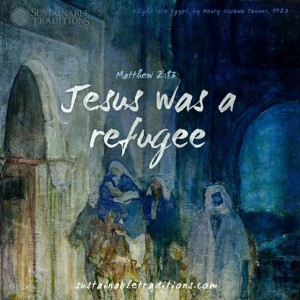 “Jesus was a refugee”

Subliminal messaging is illegal if used in movies and tv.  But subtle forms of messaging of which people may not be aware are legally used to warp the thinking of those whose minds are easily influenced.  People are generally unaware of these unless they are highly intelligent and have been taught how to recognize them.

We all know that Hollywood is heavily weighed down by not too bright liberals.  The majority of actors, directors, producers, and even screenwriters are prone to being leftists and liberals.  While most movies stick to the platform of good defeating evil, some are warped to represent evil through the lens of leftists.  These movies often depict villains as heroes and are likely to have plots that include subliminal language and images to warp impressionable minds.

Subliminal Messaging is a form of communication that is supposed to be imperceptible.  The highly illegal form of it is to embed pictures in a movie a single frame at a time so that it flashes by so quickly it isn’t seen, but the brain registers it.  The typical form is putting a subtle image on the screen such as making the clouds in Lion King spell “sex.”  More typically though is for characters to use words or phrases in the script that can be identified with what is said by politicians. 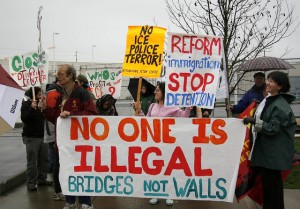 For example, inserting words like “conservatives” when describing Nazis is one instance.  In Star Trek VI, Ambassador Spock described the warmongering elements of Klingons wanting to keep their culture as “conservative elements,” though there is certainly nothing conservative about wanting to start a war which conserves nothing but radically expends resources and puts all elements into flux.  The leftists in Hollywood, however, go much farther in trying to warp the thinking of people with their subliminal messaging.

As they did in Star Trek VI, leftists inject their propaganda into movies and tv shows in any way they can.  In the movie, “Black Panther,” the hero uses the line, “Build bridges not barriers,” that is akin to Democrats, “build bridges, not walls.”  This is to dupe people into believing they are helping others by building bridges.  But that doesn’t mean you build bridges to assist your enemies in invading your country.

In the movie, “Incredibles 2,” they talk of “supers” being made illegal and that they must break the law in order to change the law to make them legal.  Supergirl’s intro does the same thing saying she came to Earth as a refugee, an actual “illegal alien.”  LOL!  The writers of those scripts proved how leftist they are with such wild declarations stating that people are stupid who don’t believe in climate change.  They also began season two praising the country for electing a woman as president because “who would vote for that other guy?”  As depicted by the Left these propagandists believe they can make people believe they are turning away “supers” at the border.

“Jesus was a refugee” 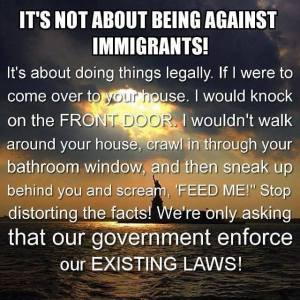 Yes, Joseph, Mary, and Jesus fled to Egypt to escape from Herod, but they didn’t sneak into the country to steal jobs.  No, Joseph and Mary were not refugees when they were looking for a place to stay in Bethlehem any more than you are when you travel and look for a hotel, especially in your own country.  People met at the border checkpoints who are fleeing war torn countries come as refugees and they are treated with compassion by ICE.  Those who attempt to sneak across the border avoiding the checkpoints are not.  They are criminals and felons bringing drugs and coming to take American’s money by working illegally.  What makes refugees from South America a crime is that the wars raging in their countries are all being conducted by leftists violently attempting to establish totalitarian control as socialist dictators.

What makes this worse is that the Obama regime financed socialists and the Islamic Jihad with American taxpayer money.  He took over $800 billion dollars borrowed against future taxpayers every year he was in office and left no trace of where that money went as Democrats refused to pass a budget.  Most of it went to their Wall Street donors to be laundered and fed back into the Democrat Party.  But much of it went overseas to these groups to help them overthrow their governments.  These Democrat crimes have made debt slaves of America’s children.

Contrary to what foolish liberals believe, illegal invaders are not super, they are not the next messiah, and they are not required to come into America.  They are criminals and the dregs of the world.  The world’s best and brightest do not cross the border illegally. 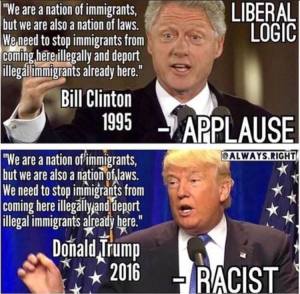 America must fix the immigration law, not because it is broken, but so that Democrats cannot break it.  Democrats don’t want to change the law, they just want to blame Republicans for having the law so they can break it.  But laws are not made to be broken as they believe.  The poem on the Statue of Liberty refers to those who don’t want to live under the oppression of leftists, not to the world’s criminals.  It was written over a century ago when the USA needed more people.  It is not to invite invaders who want to overthrow America.

Now people come here who don’t want freedom but want to be servants of the Democrats because they promise to steal from the rich for them.  Democrats are not playing Robin Hood.  They are being Prince John.  They are the oppressive government stealing from the rich making the lives of the common people living in the country worse by sucking away their wealth.  They then use force to impose their will on the people by enlisting Obama’s army of Brown Shirts known as Antifa, Black Lives Matter, Occupy Wall Street, and others to riot, assassinate police, and threaten good citizens.

When leftists declare their right to retaliate against Trump’s mockery with violence because they are offended, the proper response is not to apologize and shut up.  The correct response is to smack them down and tell them to GFY!  They can dish it out, but they can’t take it.  That doesn’t give them the right to use force against us.  When they do they prove they are the dregs of America.  People who use force to win an argument are not the intelligent people with solutions to problems.  They are the bullies who ran out of ideas by which to fool people seeking to impose their will on others by force! 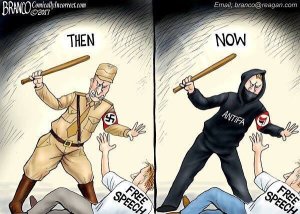 Left wing media are panicking that Trump will put a fifth consecutive on the Supreme Court because that will stop them from committing activist legislation from the bench.  What that means is they won’t be able to have judges overrule the law and make it up as he goes.  It is a galactic joke when liberals say they want the court to be “fair” by making or breaking law from the bench.  The joke becomes even greater when atheist socialists try to tell Christians what Jesus would do.

The people who are protesting the police and ICE wanting to abolish them are the criminals.  Who do you want running your government?  The people who take the government’s boot off the throats of businesses so they can grow and only take taxes that are necessary to serve the American people?  Or do you want the people who put that boot there wanting to soak up America’s wealth and give it away to the dregs of other nations and their already wealthy Wall Street croniesk?

Right vs. Left: Propaganda, Alternative Facts, and the Weapons of War

Who the Nazis are in America

This site is my opinion only and is unpaid. I am a retired Paramedic/Firefighter with 25 years of service in the City of Dallas Fire Dept. I have a B.A. degree in Journalism, and A.A. degrees in Military Science and History. I have spent my life studying military history, world history, American history, science, current events, and politics making me a qualified PhD, Senior Fellow of the Limbaugh Institute, and tenured Professor Emeritus for Advanced Conservative Studies. 😄 It is my hope that readers can gain some knowledge and wisdom from my articles.
View all posts by dustyk103 →
This entry was posted in Politics and tagged American Immigration Law, Border Crisis, Donald Trump, Illegal Immigration, Immigration reform, Movies and TV Propaganda, Refugee Jihad. Bookmark the permalink.