The Only Chaos in the White House is the Liberal Media 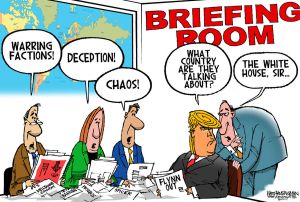 Democrat media pundits are all screaming that Trump is unstable, his administration is in chaos, and the country is rudderless.  They are promoting their fairy tale that President Trump is a Hitler wannabe who can’t make up his mind from one moment to the next where he stands.  But to the intelligent observer Trump is rock steady and demonstrating why he became a billionaire by being a master negotiator.

The first mistake everyone makes is believing anything that the liberal media says!  When Barack Obama went after Christian businesses to force abortion and gay rights on the church they all provided cover for him declaring him to be a devout Christian.  Devout Christians don’t promote abortion and undermine the church with culturally accepted immorality.  The Catholic Church has all but excommunicated Nancy Pelosi for her endorsement of abortion.  The media hides the fact that Obama was raised a Moslem, went to a church that promoted the Islamic version of Jesus, and invited the Muslim Brotherhood into the White House where he could share America’s secrets and empower them to launch the New Caliphate.  That Caliphate is now being systematically destroyed, along with all other of Obama’s anti-American dictates, by President Trump.  But you will never hear the liberal media admit that Obama was a narcissistic dictator wannabe who destabilized America and continues to undermine the country through his army of liberal fascists.  When Trump jokes about China’s president making himself dictator for life the leftist pundits quiver in abject terror.  But when Obama seriously expounded about how nice it would be if he were king they urged him to take up the scepter.  Their two faces are always on display for those who have eyes to see and ears to hear.  They imagine themselves fighting against fascism when they are the fascists.  The indoctrinators censor righteous teachings so they can infect America’s youth with their lies and revisionist history.  It’s the ultimate self-delusion of the Left to believe that fascism is a product of the Right when it is ingrained in the darkest hearts and souls of the socialist movement.  Only the two-faced can see themselves as righteous as they inflict their persecution on others and it has happened throughout history whenever the Left corrupts what is righteous.

Democrats in Praise of Chinese Communism

President Trump has proven why he became a billionaire through his masterful negotiations.  He has made the leftist media fall flat on their faces and has blown up so many of their schemes in their collective faces that they look like they’ve been going after the Road Runner.  He exposed RINOs by sandbagging them in an open meeting to uncover who would help Democrats obtain amnesty for illegals and truly shaft American citizens.  No doubt the statement that he would suspend jurisprudence to seize guns was either another such ploy, or more likely that he just said that in facetious contempt of Democrats who want to do just that!  The tariff chaos is doubtless deliberate to force poor trade partners back to the table, but it is no empty threat.  When people believe they can get away with stealing from you because your predecessors were incompetent boobs, why should they renegotiate unless their hand is forced?  No one wants a trade war because no one profits and everyone suffers from it, but they will only be willing to renegotiate if they know you’re willing to swing the axe!

Donald Trump has been president for one year and has made the most amazing, extraordinary progress in undoing the damage that Obamaism has wrought and gotten America well on its way to being great again!  He has accomplished more than even the great Ronaldus Magnus, and is on track to make this next year even more productive.  The last thing that the liberal media wants is for people to start realizing how great the economy is doing, how much more money they have in their pockets from tax reform, and how much better Trump is making America.  But they are failing thanks to rightwing media and Republican pushback.  Democrats are swinging wildly throwing haymakers and slinging an avalanche of mud at the Trump Team hoping something will stick long enough to do damage.  They wouldn’t applaud reducing minority unemployment, but instead cheer every tiny victory they have at the expense of the American people.  They are gearing up for the greatest voter fraud campaign in history and hoping Mueller will unleash an October surprise of indicting Trump for collusion with Russia.  And they know full well that it will all go up in smoke because it’s all a fiction, but not before votes are cast.  This is why Trump needs Jeff Sessions to get his head out of his rump.  Condoleezza Rice chastised Schiff for obfuscating and constant delaying to present his case, but it is Sessions who needs to sh*t or get off the pot.  Dump a load on these crooked Democrat’s heads and flush their corruption down the toilet or step aside for so men of action and honesty can put a stop to these Democrat frauds.

Trump’s Having Fun — and They Don’t Get It

Leftists Lie – Why Democrats Always Get It Wrong

Democrats or Republicans, only one is the Party of Lies, Slavery, and Death

This site is my opinion only and is unpaid. I am a retired Paramedic/Firefighter with 25 years of service in the City of Dallas Fire Dept. I have a B.A. degree in Journalism, and A.A. degrees in Military Science and History. I have spent my life studying military history, world history, American history, science, current events, and politics making me a qualified PhD, Senior Fellow of the Limbaugh Institute, and tenured Professor for Advanced Conservative Studies. 😄 It is my hope that readers can gain some knowledge and wisdom from my articles.
View all posts by dustyk103 →
This entry was posted in Politics and tagged Democrat propaganda, Donald Trump, Leftist lies, Liberal Media Fictions, Trump Master Negotiator, White House Chaos. Bookmark the permalink.