The Government Shutdown That Isn’t 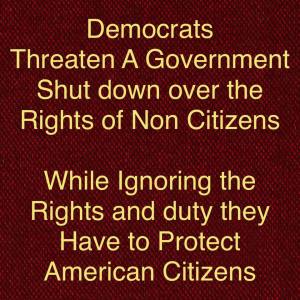 1996 the government shut down because Clinton refused to sign Republican’s balanced budget and Democrats said school children will starve.

2013 government shut down because Republican Senator Ted Cruz filibustered the ObamaCare mandate tax that went into effect that year, and Obama put armed guards at National Parks and the WWII Memorial.

2018 shutdown will be because Democrats under Schumer demand the military be shorted in order to pay benefits to the children of illegal immigrants and Democrats say refugees will die.

Government Shutdown is not as ominous as it sounds.  Social Security and Welfare checks will still go out, and Congress and their staffs will still get back pay after their vacation.  This is a sick game of political showmanship, one-upmanship that Democrats play.  But don’t expect Trump to be putting armed guards around National Parks and the WWII Memorial as Obama did to keep Americans out.  The truly sickening thing is that these politicians using the people as their pawns suffer no consequences for shutting down the government because they refuse to work together, refuse to give the party elected to power what they want.  Instead they use it to try to inflict pain on the people.  Obama had no problem telling Republicans to take a long walk off a short pier after he won.  Republicans bent over for Obama even after the nation elected them to power to stop his agenda of tearing down America.  Now Trump is telling the Democrats that he and Republicans were elected to make policy, but Democrats will have none of it regardless of all the great results achieved this past year.  Instead they slander every penny put back into the pockets of American taxpayers.  Now their efforts are bent, not on helping the American people, but on protecting the children of illegal immigrants they unlawfully want to award with citizenship all at the expense of the men and women of America’s self-sacrificing military.

The lie is that the people need to government so they don’t all die.  The lie is that government suffers when it shut downs and that necessary services are lost.  If these politicians lost their pay instead of just getting it all returned in back pay, if they lost their platinum pensions and Cadillac medical benefits they voted for themselves at the people’s expense, then they wouldn’t dream of shutting down anything!  They are unwilling to suffer themselves, only to inflict suffering on others to teach them not to oppose their rule.  Democrats have shut down the government twice and blamed Republicans each time, a ploy that works because Republicans have been stupid enough to submit to the charge and bear responsibility because the Democrats certainly will not!  But President Trump is not a Republican establishment elitist willing to lose face so the media will praise him.  He will stand strong for what is right and lay blame at the feet of the Democrats who put the welfare of those who stole into the country over the lives of the citizens that elected them.  The Democrat media can try to smear him as uncompassionate and racist, but they all fall flat on their faces when the light of the truth is shined on them as pandering to foreigners while throwing working Americans under the bus.  They are essentially saying that a rich man who embezzles millions from the people who work for his company can give his money to his children, and rather than return that money to the people from whom he stole it they will give it to his children out of “compassion.”  What about the children of the families from whom he stole that money?  That is how these fascist Democrat liberals backwards think.

Trump’s Best Response to Charge of Racism – Go F*** Yourselves!

This site is my opinion only and is unpaid. I am a retired Paramedic/Firefighter with 25 years of service in the City of Dallas Fire Dept. I have a B.A. degree in Journalism, and A.A. degrees in Military Science and History. I have spent my life studying military history, world history, American history, science, current events, and politics making me a qualified PhD, Senior Fellow of the Limbaugh Institute, and tenured Professor Emeritus for Advanced Conservative Studies. 😄 It is my hope that readers can gain some knowledge and wisdom from my articles.
View all posts by dustyk103 →
This entry was posted in Illegal Immigration, Politics and tagged Amnesty, Chain Migration, DACA, Democrat Dreamers, Democrat voter drive, Donald Trump, Government shutdown, Illegal Immigration, Schumer Shutdown, The Wall, VISA Lottery. Bookmark the permalink.

1 Response to The Government Shutdown That Isn’t