Playing the Trump Card Against the Race Card 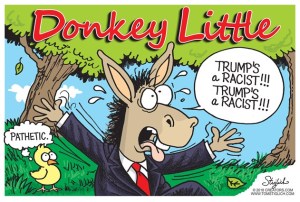 Liberals call Trump a racist in the face of all he has done for minorities which is ten times more than Obama ever did.  Trump’s response leaves them apoplectic in rage that he does not submit to their will.

Trump eviscerated Democrats will one simple question: Why do they want to import the world’s dregs and criminals rather than the best and brightest they pretend to endorse?  They slander him as racist for saying these people come from sh*thole countries.  It’s no different than Democrats who flee to red states to escape Democrat taxes in their sh*thole states and sh*thole cities embracing illegals giving them sanctuary from the law.  They talk the same way about what they refer to as “Flyover country,” which is the red states of the Moral Majority between New York and California.  They applauded Obama’s “sh*t show” remarks on Libya after he got our ambassador killed and blamed it on a video no one ever heard of.  They cooed over his being a crackhead while they smeared Bush as a doper for smoking pot.  Everything they say and do is the opposite of morality and honesty.  Pristine conservatives and liberals believe they are above sin, yet Trump is accomplishing more conservatism than Reagan did.  Trump is Reagan x10!  He is the fighter America needs at this time to beat back the depredations of the Left.  Those who complain he is “too vulgar” are merely leftist agents in sheep’s clothing.  The profanities being hurled at Trump by Democrats are a thousand fold worse than anything he has said about them.  He has shown that Democrats don’t want a solution.  They want a grievance they can complain about and cry over.  Their only solution is for Trump to give them everything they demand to prove he’s not a racist.  How stupid do Democrats think people are?  It is a false assumption, an illusion that Republicans and Democrats can work together.  Democrats are the party of slavery that wants the president to be the king.  On FOX News they have actual debates about Democrat’s illegal immigration policy: 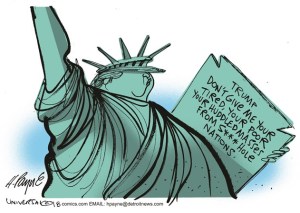 Democrats say they are for legal immigration, that they want the worlds best and brightest, but they advocate for importing the dregs of humanity illegally as cheap labor and awarding them citizen’s rights and benefits.  They are not bringing the best of educated, law-abiding people into America, but the worst of them, prompting Trump to ask them why they want these people in America to live off of citizens as parasites and supplant them at the polls? 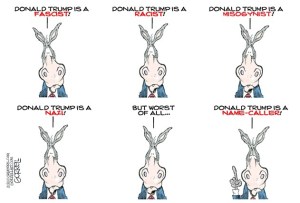 A caller to Rush Limbaugh said that “Donald Trump is an atomic truth bomb” blasting in the faces of liberals leaving them blinded by the light.  Liberals hate Trump because he is living proof that America is the greatest nation in the world and, under righteous leadership, the American Dream is alive and well.  Faux conservatives hate Trump because he is implementing the policies they always claimed to be for, but they are being left out of the spotlight because they failed to fight for them.  They never had the courage to do more than pay lip service while they bowed to Democrats and submitted to the will of the Left.  There is no “crossing the aisle to work with Democrats” because the only way to work with them is to surrender to their agenda.  Their policies are all anti-American, pro-totalitarianism wherein they, as the ruling elites, lord over the masses they have duped into believing their lies.  Democrats and their NeverTrumper RINO allies believe they can take by Congress in November and kick Trump out.  Their only platform is Trump hate.  They run against Trump’s economic boom, against border security, against stopping an invasion of illegal immigrants, against a strong military, and against tax cuts that benefit the people.  They call it all racist Republican greed as if they can convince those Americans who are not fools that their lies are the truth.  Donald Trump is winning against all of them because he is a fighter, not a wordsmith.  The Lord did not give his angels weapons because you fight evil with words alone.  (No doubt liberals will take this metaphor as proof that God is a Nazi.) 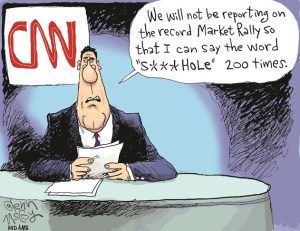 Rush Limbaugh asks what the Democrat Party can run on as their platform.

“So you could run an ad: 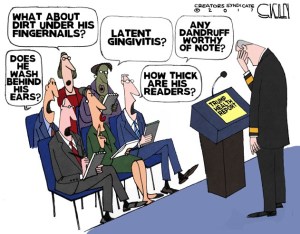 Democrats believe they can make a wave election to sweep Republicans and Trump out of office, yet all they have to offer is Trump hate and all the lies they are willing to tell to say they are not all of the above.  It shouldn’t be a question of “if,” but a no-brainer for the Republican Party and the people of this country to see through the Left and their gross deceptions.  It all boils down to conservative truth vs. liberal lies and, like morality, truth, contrary to what the Left believes, is not subject to interpretation.  The only question is how hard will the Establishment Republicans strive to snatch defeat from the jaws of victory this time?

In closing I would like to say that Democrat’s phony indignation over Trump’s words, along with their phony investigations into non-existent crimes, and their phony charges of racism are a galactic joke in the face of the Moral Majority!  The liberal media were thrilled with Obama’s vulgarities against patriotic American, especially his referring to TEA Party members like me as “Teabaggers.”  I’m so gratified to see President Trump shredding Obama’s anti-American legacy that I am not only proud to have him as president, but very proud to be one of the people ‘tea-bagging’ Obama’s dead presidency.

This site is my opinion only and is unpaid. I am a retired Paramedic/Firefighter with 25 years of service in the City of Dallas Fire Dept. I have a B.A. degree in Journalism, and A.A. degrees in Military Science and History. I have spent my life studying military history, world history, American history, science, current events, and politics making me a qualified PhD, Senior Fellow of the Limbaugh Institute, and tenured Professor Emeritus for Advanced Conservative Studies. 😄 It is my hope that readers can gain some knowledge and wisdom from my articles.
View all posts by dustyk103 →
This entry was posted in Politics and tagged 2018 Elections, Democrat Immigration Policy, Democrat Party Platform 2018, Donald Trump, Illegal Immigration, Liberal Fascism, Presidential Vulgarity, The Race Card, The Trump Card, Trumping Racism. Bookmark the permalink.