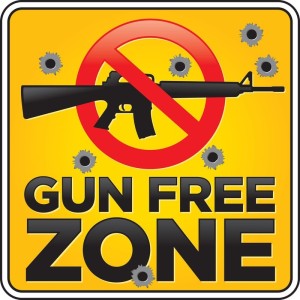 Democrat Senate Majority Leader Schumer said on the floor of the Senate that the way to stop mass shootings is that they should pass laws that would “keep guns out of the wrong hands.”  This is GENIUS!  Absolutely the MOST BRILLIANT concept EVER!  WHY hasn’t anyone ever thought of doing this?  Why has no one ever considered such an amazingly simple law before now?  Doc Brown (Christopher Lloyd) would find this mind blowing!

Doc Brown on hearing this grabs his hair with both hands and his eyes go buggy; “Uhhhhh, WOW!  My mind is absolutely blown!  Like,” he flares his fingers beside his head, “Boom!”  Doc staggers about shaking his head.  “It’s so simple!  The genius of this solution is beyond anything I’ve ever heard!”  Wagging his finger he expounds, “ Ya gotta hand it to these Democrats.  They really know stuff,” he declares as he stares off into space.

Indeed.  When Democrats point out that letting people own guns creates two hundred million potential mass murderers their idiotic solution seems simple.  Get rid of the 2nd Amendment.  Get rid of the NRA.  Get rid of concealed and open carry laws.  Don’t allow anyone to own a gun who isn’t licensed by the state as a government representative.  Do what England, France, and Australia have done.  There are no more mass murders in those countries… oh, wait.  Then do it the way it has been done in the past by Adolf Hitler and Benito Mussolini.  It’s not like that’s the first thing every brutal dictator in history has done… oh, wait.

This ridiculous rhetoric only works on emotionally consumed ignorant people.  The Left says Trump is a Hitler wannabe and then suggests people be disarmed.  It’s bass ackwards liberal thinking!  If Trump were a Hitler type then why would you want to voluntarily disarm?  But it has never been Trump who suggested this.  It was Obama and Hillary who say people should not own guns.  It has always been the Left that produces tyrants and dictators and mass murderers while advocating for the sheeple to be helpless and rely on their magnanimity.

An idiot Democrat in the news said, “What is legal is no longer moral.”  She said that as if it were a beacon of wisdom when it’s nothing more than a vacuous platitude.  What is morally right and what is legally right do not always corresponding, but Democrats wouldn’t know what is morally right if it hit them in the head.  It is not guns that need to be controlled.  Guns are no more responsible for murders than are forks for making people fat.  They no more cause crimes than pencils cause spelling errors.  The logic of the Left is to blame the tool and excuse the perpetrator.  They blame the victim and justify the criminal.  The largest lobby in Washington that advocates for murders is not the NRA, but the National Bar Association and those who lobby Democrats to hinder laws against punishing the guilty.  “It’s better a hundred guilty men go free than one innocent man be convicted.”  What kind of dumbass logic is that?  So you would allow a hundred murderers to get away with their crimes so they can kill again to save one innocent man from being wrongfully convicted?  Not only do a hundred murderers go unpunished, but another hundred families and more must suffer the anguish of homicidal Democrats.  That’s not logic or compassionate or righteous.  It is better that they all get convicted and the innocent man be freed through the appellate system.  That’s why it exists!

Democrats have made it easier to escape punishment for crimes rather than deter crime by punishing the criminals.  They blame society for creating criminals by not giving the poor what they want when the fact is criminals are created by leftist’s lack of morality, hatred of God, greed, envy, sloth, and contempt for people.  They say we must understand the criminal’s point of view and empathize with them, understand them, and show compassion for their grievance. Those who demand government steal from the makers and give to the takers are the parasites of society.  A culture is judged on how it cares for its weakest members, not its worst!  Before the 1950s nobody was really concerned that a murderer might suffer during his execution.  Considering how they made their victims suffer such sympathy is both morally and ethically misplaced.  Since Democrats took execution off the table and made prison into a country club the number of murderers has radically increased.  The cost of putting murderers to death and incarcerating the worst of violent offenders is more than providing food, housing, clothing, and luxuries for deadbeats.  The solution to the murder rate is simple – destroy the murderers and crush the repeat violent offenders.  It has always worked in the past.  The only reason it doesn’t work now is because Democrats have found that violent criminals like Antifa terrorists, BLM assassins, gangs, drug lords, and deadbeats all make for viable constituents.

Gun control is not the answer – Criminal control is! 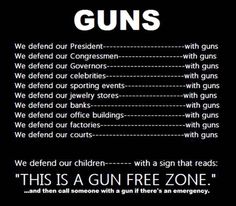 Sen. Schumer’s idea is brilliant – to low grade morons and those who lack a moral compass, which pretty much describes every single Democrat.  Doc Brown was only joking, flabbergasted at the galactic stupidity of a sitting U.S. senator.  But Schumer, Pelosi, Clinton, and Obama are proud that their empty rhetoric can still stir up a hornet’s nest among their lemmings. 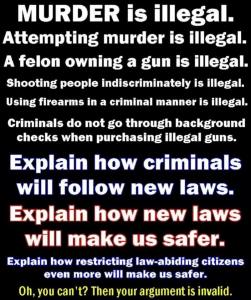 The stark moral difference between the Right and Left is that, if this had happened at a rap concert to Democrats, the Right wouldn’t have been celebrating it and make hollow cries about guns being the culprit.  Obama allowing the Bump Stock to be used to make a weapon fully automatic in 2010 circumvented the Reagan ban on automatic weapons in 1986.  The National Firearms Act of 1934 was designed to stop criminals from having heavy weapons.  There are three parts to a weapon; the stock, the action, and the barrel.  Acts were passed to make converting the action to fully automatic illegal.  So why would Obama allow a weapon to be made fully automatic via the stock as opposed to the action?  When it has always been Democrats who advocate for disarming Americans completely this makes no sense.  Then again, when those same liberals advocate for disarming the people in the face of a man they see as Hitler it makes perfect sense to a dysfunctional mind.  But then Democrats obviously believe they can smear Trump and turn enough of the people against Republicans through their propaganda to get re-elected, and then they believe they’ll have enough power to secure their place permanently if only the citizenry can be disarmed.  The Bump Stock needs to be banned, and the FBI needs to pay more attention to people who gather an arsenal, but citizen’s rights to be armed needs to be rigorously protected against Democrats.  The lies that Hillary and all Democrats are spouting about the NRA and good citizens is what needs to be exposed and their criminals are the ones who need to be prosecuted and harshly punished.

Leftists say gun deaths in the USA are more than all deaths in all American wars combined.  That lie includes suicides that account for the majority, plus accidental shootings.  Only a quarter of them have been homicides.  But even most homicides are not committed with firearms.  Yet that doesn’t stop leftist Democrat Sen. Schumer making a heartfelt plea for Trump people to turn against the NRA that has never advocated or killed anyone.  Rush Limbaugh had the perfect reciprocity against Schumer’s slander of the NRA by comparing them to the Democrat’s Planned Parenthood that has promoted killing a million babies in the womb every year for decades:

RUSH: Here’s Chuck You Schumer. This is on the Senate floor this morning in Washington. Well, just listen. This kind of speaks for itself. See what you think.

SCHUMER: If we could talk to those brave souls who were killed and are now in heaven, they would say, “Do something.” They wouldn’t say, “Let’s wait.” President Trump, are you gonna wait to hear what the NRA says first? You fashion yourself as a strong man. Well, are you gonna show that you are not beholden to anyone now? Are you gonna show your strength now? Are you gonna be the first president, Republican president in a generation, to buck the NRA? I say to President Trump, come out and say that you support and would sign a law to ban bump stocks.

RUSH: You know what I feel like doing? I feel like doing a monologue addressing all of those babies who’ve been killed by Planned Parenthood and asking them what they would be saying, if they could speak. They would be saying, “Do something. Shut down Planned Parenthood.” There are over a million abortions a year in the United States of America, dwarfing the number of homicides every year. It’s been the case since 1973, minimum. We don’t know the numbers prior, but you have to think that they’re close.

But Senator Schumer can venture to the floor of the Senate and start impugning the NRA, which hasn’t killed anybody, which does not support the killing of anybody, which does not have locations in strip malls and other public places where you can go in and enlist the help of the NRA in killing people. They don’t do that. You can’t do that with the NRA. You can do that with Planned Parenthood. In fact, the Democrat Party urges people to do just that, as they have politicized abortion. 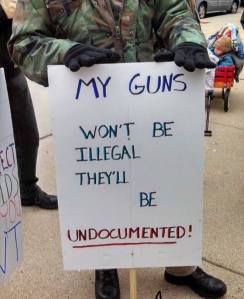 Too many people are ignorant of how blue state anti-gun laws have unleashed the worst crime rates in the country.  That’s because wolves go where the sheep are unprotected.  Chicago Democrats have the toughest gun laws in the country, yet they have the highest murder rate because criminals enjoy a free fire zone.  A gun on your hip is a million times better than a phone in your pocket when Democrats let the wolves run wild.

The side we choose in life, to protect life or to take life, to tell the truth or to deceive, to be a maker or a taker, is the proof of our character:

“Our life stories aren’t defined by the things that happened to us.  They’re defined by how we deal with them.” – (unknown)

This site is my opinion only and is unpaid. I am a retired Paramedic/Firefighter with 25 years of service in the City of Dallas Fire Dept. I have a B.A. degree in Journalism, and A.A. degrees in Military Science and History. I have spent my life studying military history, world history, American history, science, current events, and politics making me a qualified PhD, Senior Fellow of the Limbaugh Institute, and tenured Professor for Advanced Conservative Studies. 😄 It is my hope that readers can gain some knowledge and wisdom from my articles.
View all posts by dustyk103 →
This entry was posted in Fundamentals, Politics and tagged Assault Weapons, Automatic Weapons, Bump Stocks, Chuck Schumer, Criminal Advocates, Democrat Lawyers, Democrats, Donald Trump, Gun Bans, Gun Control, Gun Free Zones, Liberalism, Mass shootings, Terrorism, Vegas Massacre. Bookmark the permalink.