These are the fantasies of the Left.  Democrats keep calling for Trump to be impeached on their insane trumped up charges of misconduct.  As delusional as this is there are some 20% of people who are so detached from education, let alone reality, that they believe it could actually happen that Trump be removed on the basis of their accusations and Hillary put in his place!  Liberals are trying to manufacture crimes where none exists while they ignored the crimes of their own people.  Trump gives them a Special Prosecutor to run them through a maze of their own creation knowing they won’t find any cheese at the end.  As they chase their own tails perhaps he will have some peace from their constant attacks to do more good for the country.  But leftist lies still must be contained lest they infect people’s minds like a fascist virus because he knows that a lie that is big enough told often enough eventually becomes the truth.

Liberals are so uneducated, irrational, and two-faced that the word hypocrisy doesn’t really attach itself to liberalism.  Duplicitous, two-faced, pathological liars, deceitful, two-faced, maniacal, violent, two-faced, dangerous, and two-faced all apply.  Two-faced is the most accurate descriptor of liberalism because they consistently espouse two opposing opinions of theirs as being correct.  The Democrat media’s smears of Trump accusing him of doing what Obama actually did makes clear that they are not objective journalists, but propagandists.  President Trump rightly labels this for what it is – a witch hunt.  Obama did exactly what they are accusing Trump of doing when he and Bill met with AG Lynch to get the investigation of Hillary shut down, and then she got Comey to take the fall.  But you hear them singing his praises while damning Trump because they think he thought of doing the same thing.  Leftists are not trying to convict Trump for wrongdoing, but manufacturing their own fantasies so they can to vilify him in the eyes of the people and convict him in the court of public opinion.

The media itself is violating national security endangering all Americans in their efforts to sabotage Trump by leaking all these lies.  Just as the Democrat Congress nuked the economy in 2008 to sabotage McCain’s campaign, leftists today are trashing national security in their efforts to undo Trump.  These are the people who gave the presidency to a man raised in a foreign country where he was taught to hate America.  Barry Sotero, aka Barack Hussein Obama, was raised to be a racist, socialist, and Islamist, and they made him Commander-in-Chief while America is in open war with the Islamic Jihad.  Obama weakened America economically, militarily, and diplomatically to the cheers of half of the country, while that same half cried about how poorly the country was doing, but they were easily duped that it was the fault of Republicans who had no power.  These leftists deliberately violate Constitutional and congressional law to obstruct President Trump from performing his duties as president restricting illegal and hostile immigrants from entering the country.  They say Trump is guilty of “intending” to ban people from the country for reasons of racism, but they gave Hillary a pass on violating national security because they cannot prove “intent.”  So, by their logic, no one is guilty of manslaughter because there was “no intent” for drunk drivers to kill anyone.  But liberal judges say Trump is guilty because they can read his mind to see his “intent” to stop illegal immigration and the Moslem jihadis on the basis of what they believe to be his racist nature despite lack of any evidence throughout his life history that he is anything but just.

Liberal media crimes, misdemeanors, and insanity are the order of the day when it comes to President Trump.  When Obama and Hillary did ten times worse things during their terms the liberal media wasn’t just silent, but actively covered up their misdeeds.  Trump Derangement Syndrome is real and we are seeing it.  Democrats in the media repeatedly attempt to fabricate stories to manipulate public opinion against Trump.  You can look across the entire spectrum of liberal media outlets and all of them say the exact same things about President Trump:

Do liberals even know what these words mean?  Firing Comey obstructs nothing.  Unlike Clinton, who fired his FBI Director over the White Water probe to put one in place who would block it, or having a clandestine meeting with Obama’s AG to get the investigation of Hillary squashed.  No special prosecutors were assigned to them!  And “a coup?”  wtf?  A coup is to overthrow the rightful government.  How do you enact a coup against yourself?  That’s just stupid!  A coup is the Democrats trying to overthrow Trump and put Hillary in the Oval Office against the will of the American people!  Talk about a loss of credibility – the leftwing Democrats and their sycophantic media lapdogs have zero cred with all intelligent people who love America.  Leftists are as incapable of understanding the English language as they are of reading people’s minds about their “intent.”  These people do not live in reality. 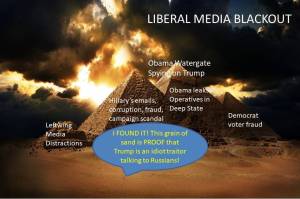 Liberals always project their duplicitous mental illness onto Trump and the Right.  Their leftwing judges, who are violating the Constitutional and legal rights and powers of the President, say that their interpretation of what Trump said during his campaign is the basis of their ruling.  Claiming they can read his mind and determine the deeper meanings of his actions based on what he has said in the past is the epitome of psychosis.  At the same time, leftists at the NYT say Trump should start governing instead of campaigning.  They haven’t missed the fact that Trump has reinvigorated American energy, oil drilling, coal mining, and steel production.  They just want to find ways to distract the people from noticing all that Trump is doing to improve the economy by crushing Obama’s legacy.  According to the liberal media the best thing Trump can do is bend over and grab his ankles for them to give him a microscopic anal probing and then fall over and die.  Contrarily, while they were with Obama, they had their noses buried so far up his rectum that not only could they not smell his corruption, but they couldn’t even see his treasonous activity or hear his lies.  Everything they imagine Trump has done to violate anything is entirely in their delusions of what they wish were true, while Obama’s gross misconduct and violations of the Constitution were done in full view of all.  Where they were hush hush for Obama, they scream treason at Trump imagining him doing as Obama did.

The Left keeps claiming that every new election, every vote against Trump is the entire nation voting against his policies.  What can be seen in Georgia’s 6th Congressional District race, as always, is the Democrat campaigning as if he is a Republican while claiming that Republicans will govern as if they are Democrats.  If people ever paid attention to what their elected representatives actually do rather than listen to what they or the media say then maybe this country could get on the right track!  The media, except for a very few outlets, is the Democrat Party.  When you realize that they are not reporting the news, but are Democrat hacks spreading leftist propaganda, conducting smears, and covering up liberal lies, then you may begin to see the truth.  When you understand who the Left is, anti-American Communists who want to destroy this country as founded and not American patriots who love this country, then you will achieve the enlightenment of the educated conservative over the ill-educated liberal fool.

The Decline and Fall of the American News Media

A side-by-side comparison of Trump’s activities vs. Obama’s tells the whole story:

Ninety percent of the media sold their souls to the Devil long ago.  Do you want to follow their lead or follow the Truth?  You cannot believe lies and be enlightened.

Democrats will persecute Trump regardless of the outcome of any investigation

RUSH: “If they find some [evidence], I’m not gonna believe it. I’m gonna tell you right now, I’m not gonna believe it [because you can’t find something that doesn’t exist – you can only manufacture it]. If they don’t find some, the other side’s gonna say they don’t believe it, and the media, not the Democrats, are gonna — as you say — impanel endless roundtables on TV to discuss how the once-great Bob Mueller ended up being corrupted by Donald Trump. That’ll be number one. Number two: “How did they miss it? With all the leaks to the Post and the Times, how did they miss it?” They’re not gonna accept this, and it won’t matter. The media is gonna continue the premise that Trump cheated, that Hillary should be the president, no matter what happens with this investigation. That’s why I think it’s a waste of time.”

Coup against Trump led by GOP insiders working with Democrats

Top psychologist says Trump is the sanest most brilliant president ever

Studies show liberal fact checkers are bad at their jobs

The Left has lost it – Obama’s Watergate and Fake News

This site is my opinion only and is unpaid. I am a retired Paramedic/Firefighter with 25 years of service in the City of Dallas Fire Dept. I have a B.A. degree in Journalism, and A.A. degrees in Military Science and History. I have spent my life studying military history, world history, American history, science, current events, and politics making me a qualified PhD, Senior Fellow of the Limbaugh Institute, and tenured Professor Emeritus for Advanced Conservative Studies. 😄 It is my hope that readers can gain some knowledge and wisdom from my articles.
View all posts by dustyk103 →
This entry was posted in Politics and tagged Crisis of Credibility, Democrat's crimes, Democrats, Donald Trump, FBI Director Comey, Hillary's Crimes, Leftist ideology, Liberal media, Liberalism, Media propaganda, Obama's crimes, Obstruction of Justice, Political corruption, Republican's crimes, Special Prosecutor Mueller, Trump Russia Investigation, Trump's crimes. Bookmark the permalink.