More liberal stupidity over Comey firing and around the world

For the last six months Democrats have damned Comey as a Judas who should be fired.  Now that Trump fired him he’s a Jesus in their eyes.

Since the election, Democrats have been calling for FBI Dir. Comey to be canned and crucified for daring to investigate Hillary’s criminal leaking of classified material on her unsecured email server – the server she destroyed when subpoenaed during the investigation.  Now that he has been fired they are outraged and declare him a martyr that was fired for investigating Trump’s fantasy Russia connection because “he was getting close.”  Comey heads the FBI and is not part of investigative teams.  Democrats have zero credibility when it comes to this entire fiasco as Obama operatives have been leaking to the press everything from within the Trump campaign and administration.  Gen. Flynn’s conversation with the Russian ambassador is their smoking gun, but they will not release his entire conversation because they know this is much ado about nothing.  If there were anything to see there they would be broadcasting it around the world.  Here is a compilation of videos and an article on Democrat’s psychotic hypocrisy and the real reason Trump fired Comey:

Democrats are the soul of hypocrisy 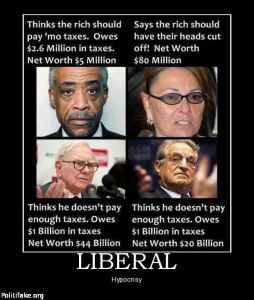 Democrats would have people believe the Moon is made of Swiss cheese and demand that missions continue to be sent until they prove it!

Fascist hate, moral depravity, colossal ignorance, and galactic stupidity; the hypocritical psychology of liberalism is based on projection and denial.

The definition of two-faced psychotic hypocrite is when you admit you love a government policy until you hear who is implementing it.  Liberals admit they love 80% of the Trump policy agenda – until you attach Donald Trump’s name to it and then it’s only 30% who like it.  In contrast, conservatives hated 80% of the Obama agenda whether his name was on it or not.  But that doesn’t stop leftwing propagandists telling fools that their objections were all based on racism as if they would have liked the same leftist policies if they had been implemented by a white man.  That they were rejected when Jimmy Carter and Bill Clinton tried them they are proven to be the petty little people that they are.  Liberals and conservatives both say the other is wrong.  It is in the nature of people to project their own character and motivations onto others.  As they conduct fascist terrorism on campus to shut down free speech they accuse the Right of being fascists.  Conservatives are also guilty of projecting their honesty and trusting nature onto liberals, which is why they are so often fooled by the devious.  Liberals live as dupes to their leadership, but conservatives learn better and become less susceptible to being fooled.

Colbert has to re-educate the monkeys about Comey’s dismissal

Democrats calling for Comey to be crucified one week and make him a martyr the next are demented.  The most important thing to remember when listening to the liberal media is that they have zero interest in reporting the truth.  Their only goal is to present a narrative that all things Trump are evil, destructive, racist, steals wealth, kills people, and is anti-America fascism.  All you need to do is open your eyes and you will see who the Left extolls as heroes and damns as villains to understand their true nature.  When you see them singing the praises of campus fascists rioting to stop free speech then you know who they really are – LiFas; liberal fascists. 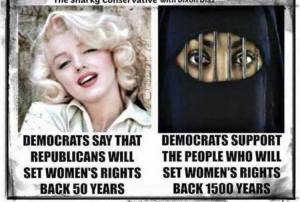 As far as they are concerned no matter what Trump does, be it good or bad, he is damned if he does and damned if he doesn’t.  When he didn’t repeal ObamaCare he was damned for not fixing the disaster it has caused.  When he did repeal it he was damned for destroying healthcare so everyone will die.  They think Obama was God’s gift to humanity when he was nothing but a lodestone to America.  The way you know if someone is good or evil is in how they respond to success and failure.  When they see someone else succeed a good person lauds them, while a bad person takes credit for their success.  When they see failure a good person forgives them, while a bad person punishes them and blames others.  Leftists can no more understand righteous judgment than they can understand truth.  They cannot distinguish between murder and killing in self-defense.  Despite the truth coming out that Comey is refusing to cooperate with the Trump administration and reveal the Obama operatives leaking from within his own organization they maintain he was wrongly terminated.  This is the duplicitous nature of the Left.

Why Rush is Fascinated with the Millennial Generation

Liberal stupidity is a Pre-existing Condition

This site is my opinion only and is unpaid. I am a retired Paramedic/Firefighter with 25 years of service in the City of Dallas Fire Dept. I have a B.A. degree in Journalism, and A.A. degrees in Military Science and History. I have spent my life studying military history, world history, American history, science, current events, and politics making me a qualified PhD, Senior Fellow of the Limbaugh Institute, and tenured Professor Emeritus for Advanced Conservative Studies. 😄 It is my hope that readers can gain some knowledge and wisdom from my articles.
View all posts by dustyk103 →
This entry was posted in Politics and tagged Democrats outrage over Comey, Democrats want Comey fired, Donald Trump, James Comey, Leftist ideology, Liberal hypocrisy, Liberal insanity, Liberal media spin, Liberalism, RESIST!, Trump can do not right, Trump fires FBI Director Comey. Bookmark the permalink.