Obama labels conservative media “fake news” due to his own delusions of grandeur and deceptive nature.

Leftwing propagandists say rightwing propaganda is why Trump won the election.  Obama’s great achievements have been smeared by conservatives with “lies and distortions” according to Obama and his media sycophants.  Liberals want to shut down the Internet access of anyone they deem as telling lies about Obama’s supreme excellence on the economy, immigration, combatting terrorism and climate change.

Let’s just do a quickie run down on the economy.  Obama’s media says we have experienced “record economic growth” under Obama.  The only reason there have been no negative GDP reports is because of Democrats cooking the books.  Every month they would report new jobs on the news and then quietly downgrade the report a week later.  Obama uses the phony U3 number to report unemployment that doesn’t take into account the actual U6 number of total people unemployed.  As people dropped out of the workforce the U3 stops counting them and the percentage artificially dropped.  Democrats starting doing this back in the Reagan era to make Reagan look bad and Carter look good just as they do it now to make Bush look bad and Obama look good.  This is “fake” according to the Left.

In the real world America’s economy has been stagnant and her workforce shrinking as more youths graduated and were unable to enter the lousy job market of Obama’s America.  ObamaCare and other taxes, regulations reducing energy and any company deemed to be “polluters” were put out of business like the coal industry.  America now has to buy its coal from China and be dependent on a foreign power that does not want America to be powerful.  Were it not for Texas the American economy would have been in the red for the last eight years, but this is “fake” according to the Left.

Immigrants have flooded into America from South America bringing disease and crime.  Remember all those tens of the thousands of children being loaded on trains like it was India to ride from Central America to the U.S.?  Obama flew their parents in to join them.  He has the border patrol conducting catch & release and calls that “deportations.”  In addition to importing millions of cheap laborers, he is importing Islamic Sharia jihadis who want to impose Sharia on America.  That is why there has been at least one major and multiple minor successful terrorist attacks in the U.S. every year of Obama’s presidency.  But this is “fake news.”

Obama gave Iran, the world’s leading state sponsor of terrorism that is trying to develop nuclear bombs to use on Israel, the USA, and other infidel countries, access to $150 billion that was denied them by the Bush administration.  In addition to humiliating America’s navy by having a heavily armed patrol boat surrender to Iranian motor boats, he secretly gave Iran more billions to release hostages they had taken but was exposed.  He blames the Russians for WikiLeaks and the hacks of Hillary’s unsecured secret server.  And let’s not forget how he slowed the rise of the oceans with his climate change agenda to give billions of American dollars to third world countries for America’s CO2 crimes.  All of this is “fake news” reported by unlicensed Internet bloggers and rightwing propagandists according to Obama and the Left.

Like all totalitarian regimes, Obama wants the majority to be silenced while only his state controlled media informs the people of what they want them to know.  Democrats ache to censor all media but their own on the Internet.  It’s not like people do not have access to all the information they want and cannot discover for themselves what stories are true and which are false.  People easily fall prey to propaganda and believe what people say rather than find out what they actually do.  This has been the case for everyone supporting Obama for the last ten years.  He says one thing and does the opposite, but the Democrat propaganda machine covers up his betrayals.

Propaganda is a two-way street and a double-edged sword.  When you lie the truth will be uncovered.  When you deceive you will eventually be found out.  Whenever you listen to the news you should always listen with a critical ear and watch with a cynical eye.  Too many stories are frauds, too many frauds are covered up, and the bias by both sides should always be suspect.  If something sounds amiss then always go to the source.  Don’t take any newscaster’s word for it because all of them taint their reports with their own opinions. 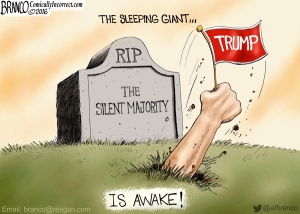 Misinformation is a standard product of the deceivers such as the reports at the beginning of Trump’s campaign that claimed he said ‘if he ran for president he would run as a Republican because their voters are stupid.’  That story was a plant with no basis in fact because he never said any such thing.  But people still believe it just like they believe people on ObamaCare can keep their doctor.  There are people to this day who believe Sarah Palin is so stupid she thinks she can see Russia from her house.  Always be skeptical of anything you hear.  Always find the source for yourself.  My own blog is my opinion based on the events of which I hear and I find out the truth behind them.  I do not report the news.  I expect you to already know the news and read what I say for a morally right perspective.  If you come here misinformed then I expect you to check it out.  Only the stupid ones say I tell lies without being capable of contesting any facts.  Obama & Co. would have people like me silenced, but we are the Moral Majority and we will not be silent!

Greg Gutfeld sums up why Democrats lost the election

Trump’s Election Will Bring Armageddon and Other Liberal Fantasies

This site is my opinion only and is unpaid. I am a retired Paramedic/Firefighter with 25 years of service in the City of Dallas Fire Dept. I have a B.A. degree in Journalism, and A.A. degrees in Military Science and History. I have spent my life studying military history, world history, American history, science, current events, and politics making me a qualified PhD, Senior Fellow of the Limbaugh Institute, and tenured Professor for Advanced Conservative Studies. 😄 It is my hope that readers can gain some knowledge and wisdom from my articles.
View all posts by dustyk103 →
This entry was posted in Politics and tagged Censorship, Conservative media, Democrat media, Internet, Liberal media, Liberal media censorship, Mainstream Media, Making Moral Majority Silent, Media, Media propaganda, Moral Majority, News, Obama's media, Silent Majority. Bookmark the permalink.