Vote Democrat, die off, and be replaced 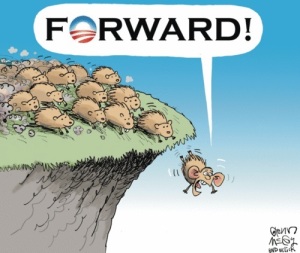 What is the purpose and ultimate goal of the climate change fraud that says mankind is a virus that is killing Mother Earth?

Democrats began this scam back in the 70s.  Its purpose is to put so much fear of death, fear of extinction in the hearts of people that they would bow and scrape and beg Democrats to save them.  The manner by which Democrats say they will save the people is for the people to give them their money.

Democrat voters are like the frog who sits in a pot on the stove waiting for the water to boil.  Their socialist leaders take their money, promise them Utopia, deliver misery, and blame Republicans.  They do it over and over and liberals believe it again and again.  When does the light bulb go on?

Have you watched any of the movies in which someone wants to destroy the human race and start over again with themselves as Lords of the Earth?  Socialists realize that they cannot rule an intelligent, educated population.  That is why every socialist state in history has had re-education camps and genocides.  Look at what Democrats want to do now;

Does this sound familiar yet?  Have you studied any history of the 20th century when socialist nations like Russia had troops take the food from Ukrainians and let them starve?  It’s happening today in Africa where Moslems are taking food from non-Moslems.  Next thing you know leftists will be saying that vaccinations and antibiotics are killing people.  Guess what happens when you stop giving people vaccinations and antibiotics?

But never fear.  Democrats have a solution.  When blacks kill each other off, when old people die off, when babies are killed off, they can just import replacements.

This site is my opinion only and is unpaid. I am a retired Paramedic/Firefighter with 25 years of service in the City of Dallas Fire Dept. I have a B.A. degree in Journalism, and A.A. degrees in Military Science and History. I have spent my life studying military history, world history, American history, science, current events, and politics making me a qualified PhD, Senior Fellow of the Limbaugh Institute, and tenured Professor for Advanced Conservative Studies. 😄 It is my hope that readers can gain some knowledge and wisdom from my articles.
View all posts by dustyk103 →
This entry was posted in Election 2016 and tagged 2016 Presidential Campaign, Air-conditioners, Antibiotics, Barack Obama, Climate change fraud, Democrat agenda, Democrat socialism, Donald Trump, Elections 2016, Electricity shortage, Food shortage, Hillary Clinton. Bookmark the permalink.

2 Responses to Vote Democrat, die off, and be replaced