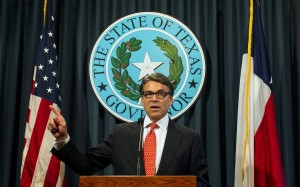 Gov. Perry faces persecution from the most corrupt court in the country.  Perry is the third Republican being charged by the Nazi court of Travis County whose DA was arrested last year for DWI and refuses to resign her position.  The court has previously put Sen. Hutchison and Rep. DeLay through the legal wringer, both of whom were exonerated in appeals.

From the bowels of Nazi Germany, Communist Russia, and Islamist Iran comes the ideology of the Left that is the heart of the Democrat Nationalist Committee, and their minions in the legal system they have corrupted.  Liberal prosecutors and judges in Travis County, Texas have persecuted Republicans over the years with bogus ethics charges in order to intimidate and harass conservatives.  Sen. Kay Bailey Hutchison, Rep. Tom DeLay, and now Gov. Rick Perry are being victimized by these Nazi scum for doing their jobs.

This is corruption incarnate that needs to be crushed.  When a person like the Travis County DA, who threatened police with persecution when she is arrested for DWI three times over the legal limit, can charge good people with crimes they have not committed to cost them millions in legal fees, this country is falling into the abyss.  People vote for Democrats to be their militant arm of criminals to make their crimes legal, and the righteous do not have to sit by and let them.

Gov. Perry’s vow to “fight these charges” has a hollow ring when these charges are blatantly false and should never have been allowed to be brought up.  But Rick told reporters yesterday that he would not only fight the charges, but also fight to have the Travis Country courts overturned and their officers be voted on statewide rather than locally.  The liberals of Travis County keep re-electing the most corrupt people, much like nationwide Democrats.  Texas, however, is a conservative state and these corrupt courts would not survive a statewide election, which is all the consideration they deserve.

Born to ignorance and immorality, how to overcome liberal’s failures in logic

This site is my opinion only and is unpaid. I am a retired Paramedic/Firefighter with 25 years of service in the City of Dallas Fire Dept. I have a B.A. degree in Journalism, and A.A. degrees in Military Science and History. I have spent my life studying military history, world history, American history, science, current events, and politics making me a qualified PhD, Senior Fellow of the Limbaugh Institute, and tenured Professor Emeritus for Advanced Conservative Studies. 😄 It is my hope that readers can gain some knowledge and wisdom from my articles.
View all posts by dustyk103 →
This entry was posted in Conservatism vs. Liberalism, Right vs. Left. Bookmark the permalink.