Mueller is proving that torture works.  If you persecute someone and threaten them with death or lifetime imprisonment you can make them say anything you want.  Mueller has done that to Trump’s lawyer Cohen, Paul Manafort, and Gen. Flynn.  All of them have been charged with crimes they didn’t commit or that are beyond the Statute of Limitations, and all three are begging for a chance to have their sentences reduced.  Gen. Flynn has had his personal finances destroyed by Mueller’s federal persecution with unlimited funds.  He was charged with lying to the FBI when he didn’t, and forced to plead guilty to protect his family.  This isn’t justice.  This is thuggery.

“Tricking criminals into speaking the truth confessing their guilt is righteous but compelling the innocent to lie to convict the innocent is a crime.”

Flynn case should be thrown out

Mueller’s bogus investigation has taken two years and moved from one false premise to another with all of them being proven false:

Every charge Democrats make against Donald Trump comes up empty and as bogus as their climate science.  The one take away from all of these accusations by Democrats is that everything with which they try to charge Trump are crimes that they themselves have committed.

Democrats exonerated Obama for $8 million dollars of illegally used campaign funds, paying off his former mentor to keep quiet, and all that happened to him was a campaign fine of a few thousand dollars.  During his presidency he gave billions of American taxpayer dollars to the Muslim Brotherhood to re-establish the Caliphate through the Islamic terror State, and then gave up a U.S. ambassador to be assassinated before he could blow the whistle on it.  These same people want every person involved in the Trump campaign to be criminalized and make Donald Trump paying off a hooker into a capital crime.  It is the sickness and twisted morality of leftism that where the righteous prosecute criminals, leftists persecute the innocent.

Manafort was convicted of tax evasion from twenty years ago, well beyond the Statute of Limitations that Mueller overrode.  Cohen was convicted of tax evasion and given three years, which will be reduced for his television interviews lying about Trump claiming he asked him to commit crimes.  When a pathological liar says Mueller finds his testimony is “credible” when the screws are put to him who would believe him except other leftist liars?  Is it any wonder Trump would not accept an interview with Mueller who would automatically claim Trump’s denial of Cohen’s veracity would be a lie as part of a perjury trap?

A judge accepted Cohen’s plea deal on the claim that he helped Trump violate campaign laws and leftists are claiming this is proof of Trump’s guilt without a trial.  If Trump is tried by Democrats, then the 268 Democrats and their RINO buddies who have been using taxpayer funds to pay off their abused women should be thrown under the jail!

[Author’s Note: I will concede that Donald Trump is unethical in paying off hookers if liberals will confess that Democrat corruption is so endemic that they should all be charged with crimes and removed from Congress along with their RINO buddies, and that Obama and Hillary should be charged with treason and swing from the gallows.]

Leftist Democrats are making crimes of non-crimes, which is why there is a gap between what is right and wrong vs. what is legal and illegal.  How many ignorant liberals believe that Clinton was impeached over sex and believe they can impeach Trump over sex?  That’s like believing Sarah Palin is so stupid she thinks she can see Russia from her house.  Clinton was impeached for lying under oath to a grand jury, while Trump cannot be charged with a crime for paying off a woman with his own money.  What Democrats are doing is trying to make being a Republican a criminal offense while they import Latino-communists and Islamo-nazis to join with liberal-fascists in the overthrow of America.

The 42% of people who believe Trump is guilty of Russian collusion are the same fools who believe the Clintons and Obamas are innocent, that all life is going to end because of CO2, and that there are more than two human sexes.  Their belief that Trump is too sinful for evangelicals to support him is deluding themselves that they somehow value righteousness.  They are the people who championed Bill and Hillary Clinton despite his many rapes and molestations that she made go away by persecuting the women who came forward.  They are the people who elected and support to this day a Moslem socialist who wanted to unmake America and remake it as a socialist dictatorship.  The sins of Trump are peewee league compared to the corruption of Democrats!  Only the self-righteous hypocrites of the left throw stones while living in glass houses. 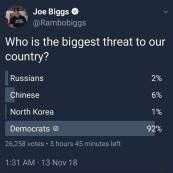 Americans are sick and tired and disgusted by this globalist persecution, fictions, and coup taking place.  The Mueller Witch-Hunt has got to be put down like the rabid dog he is!  Every Democrat who has stolen from taxpayers to pay off their women needs to be put down with him.  Trump needs to put this entire coup down hard by declassifying all materials related to it along with the phony FISA warrant Obama got to spy on him, prosecute every Democrat from Mueller’s thugs up to and including Obama and Hillary, institute voter ID that disallows illegal aliens, criminals, and idiots from voting, and build the wall!!!

It’s Still Your Country, If You Can Keep It

[Author’s Note: The worst crimes of Democrat corruption in their persecution of American patriots is their idolizing traitors like Boe Bergdahl, while persecuting Maj. Goldsteyn for daring to kill the enemy while under Obama’s command.  Obama restricted soldiers from killing his Islamist brothers.  Time for President Trump to undo the treachery of Obama and free this man as well as overturn the persecution by Mueller’s Democrat kangaroo court against Gen. Flynn.]

This site is my opinion only and is unpaid. I am a retired Paramedic/Firefighter with 25 years of service in the City of Dallas Fire Dept. I have a B.A. degree in Journalism, and A.A. degrees in Military Science and History. I have spent my life studying military history, world history, American history, science, current events, and politics making me a qualified PhD, Senior Fellow of the Limbaugh Institute, and tenured Professor Emeritus for Advanced Conservative Studies. 😄 It is my hope that readers can gain some knowledge and wisdom from my articles.
View all posts by dustyk103 →
This entry was posted in Politics and tagged Anti-Trump Democrat Coup, Donald Trump, Grand Inquisitor Robert Mueller, Maj. Mathew Golsteyn, Michael Cohen, Mueller fraud, Russian investigation, Trump Campaign Finances, Trump Obstruction, Trump's Women. Bookmark the permalink.