Trump destroys the world – again – for the umpteenth time!

Democrats are not only calling Trump a traitor to America and an imbecile, but they are describing his meeting with Putin as worse than 9-11 and Pearl Harbor combined.  One has to wonder if Democrats are capable of a sane thought?  How do people function in their daily lives believing that Trump’s every word is total destruction of humanity?

The answer is, they don’t.  Liberals live in the dysfunctional world of their delusions over reality.

If you listen to liberals they believe Trump is destroying America, destroying the world, and ending all life on the planet with every word he speaks, every action he takes, with his every breath.  Leftists have nothing intelligent or constructive to say.  They only have poison to spew on the ignorant who have no morality or understanding of history to guide them.  Oh, woe are the liberals who are dying by the millions every day!  America’s streets run red with the blood of Obamaites watching their world be destroyed. 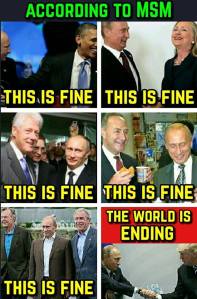 Do yourself a favor – just turn off the news and enjoy your life.  You and your children will live long and happy once you stop having Democrat poison injected into your lives.  Surprise, the tax cuts didn’t cause Armageddon, stopping Moslem immigration didn’t cause Christians to burst into flames, and Trump talking to Putin didn’t result in the conquest of America.  Vote Republican and pray for Trump to stand strong against the Left who believe America is the evil that needs to be destroyed.

You want to talk “treason?”  How about the people who elected and supported a Moslem socialist to be manage the decline of the greatest Christian capitalist nation in the world, while at war with Islam and leftist Nazi/Communist Fascism.  How about people who agree with him that America is the evil in the world oppressing other nations rather than the good in the world liberating other nations?  Trump Derangement Syndrome is Liberal Derangement Syndrome – people not in touch with reality; dysfunctionally thinking ignorant people who are easily duped.

Democrats Trying to Shame Republicans are a Disgrace

This site is my opinion only and is unpaid. I am a retired Paramedic/Firefighter with 25 years of service in the City of Dallas Fire Dept. I have a B.A. degree in Journalism, and A.A. degrees in Military Science and History. I have spent my life studying military history, world history, American history, science, current events, and politics making me a qualified PhD, Senior Fellow of the Limbaugh Institute, and tenured Professor Emeritus for Advanced Conservative Studies. 😄 It is my hope that readers can gain some knowledge and wisdom from my articles.
View all posts by dustyk103 →
This entry was posted in Politics and tagged Chicken Little, Democrat terrorism, Donald Trump, Helsinki Summit, Vladimir Putin. Bookmark the permalink.