God Bless President Trump for his support of our military 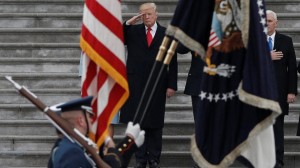 Barack Hussein and the Democrats despise America’s military from the Army on down to the Boy Scouts.  They despise anyone who fights for liberty and honor calling them bigots and terrorists.

The Left wouldn’t know righteousness if it landed on their heads, but President Trump knows honor when he sees it and applauds those who choose a life of service.  America’s military, law enforcement, and rescuers serve the nation and humanity, and the Christian organizations of the Boy/Girl Scouts seek to instill that heart of service into young.  The Left sees this as “Hitler Youth,” and Obama sought to impose homosexual and transgender rights on the military along with his spending cuts to weaken America.  His efforts have empowered the Islamic State to renew the Jihad along with the other Communists/Fascists/Nazis of the world against the free peoples of the West.  He has burdened the taxpayers with sex change surgeries for transgenders in the military.  He never once attended the Boy Scouts Jamboree where he was elected honorary President of the organization only because he was elected President by a foolish group of America haters.  President Trump has done away with all of that and the Left has become apoplectic in declaring that he has made America less safe!  How does it endanger America’s national security to not empower people who want an Addadictomy or emasculation to join the military so they can do it on the taxpayer’s dime?  This is exposing liberal insanity to daylight and they are bursting into flames!

Removing some 7000 service members from the military that want sex change operations that would cost millions restores funds taken away from weapons, equipment, training, salaries, and medical services does not weaken the military, but strengthens it.  Democrat’s social justice engineering to force the nation down to their level and accept extremists as normal, to embrace the sins rather than the sinner at the expense of the average person, is their means by which they corrupt American culture.  Saying anyone who doesn’t want their money to be used for cosmetic surgeries is a bigot is the lowest form of leftist demonization of good people.  God bless President Donald Trump for standing up for righteousness!

This site is my opinion only and is unpaid. I am a retired Paramedic/Firefighter with 25 years of service in the City of Dallas Fire Dept. I have a B.A. degree in Journalism, and A.A. degrees in Military Science and History. I have spent my life studying military history, world history, American history, science, current events, and politics making me a qualified PhD, Senior Fellow of the Limbaugh Institute, and tenured Professor Emeritus for Advanced Conservative Studies. 😄 It is my hope that readers can gain some knowledge and wisdom from my articles.
View all posts by dustyk103 →
This entry was posted in Politics and tagged American military, American servicemen, Boy Scouts, Democrat corruption, Democrats, Donald Trump, Social Engineering, Social Justice, Transgender ban in military. Bookmark the permalink.