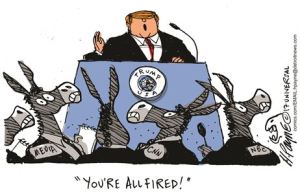 Trump said, “Fake news is the enemy of the people.”  Leftists dropped the word ‘fake’ and denounced President Trump as an enemy of the 1st Amendment.

Donald Trump announced he would not work with the Democrat media who is producing hundreds of false narratives about the Trump administration and the actions he is taking.  From a “Muslim ban” to “Trump against 1st Amendment” to “Gen. Flynn fired for being discovered working with Russians to hack the election” the Left is fabricating stories that they present to the public as journalistic news reports.  None of these has any basis in fact, but are warped distortions to create a false representation of what is actually happening in the Trump administration.  This propaganda is taking up time by people in the administration whose time would be better spent advancing the Trump agenda to make America great again by abolishing Democrat policies that have harmed the nation.  But that is the purpose of all of this hateful misinformation – to keep Trump from being effective.

President Trump announced that he would not be attending the White House Correspondents Dinner in April.  This is usually an event in which the President and WH Press Corps poke fun at each other.  But it has been used in the last eight years as a venue to smear conservatives, including Trump in 2011, while the leftwing press and Obama stroke each other.  The Donald is right not to be attending because the press is saying he is against the 1st Amendment rather than admitting the truth that they have no sources behind the smears they use to slander Trump.  The hate, vitriol, bile, and poison being spewed by the Leftwing media, which is 90% of the Mainstream Media, is something to which no intelligent person would subject themselves to voluntarily.

Liberal Democrat Media Pretends they are without Sin

This site is my opinion only and is unpaid. I am a retired Paramedic/Firefighter with 25 years of service in the City of Dallas Fire Dept. I have a B.A. degree in Journalism, and A.A. degrees in Military Science and History. I have spent my life studying military history, world history, American history, science, current events, and politics making me a qualified PhD, Senior Fellow of the Limbaugh Institute, and tenured Professor Emeritus for Advanced Conservative Studies. 😄 It is my hope that readers can gain some knowledge and wisdom from my articles.
View all posts by dustyk103 →
This entry was posted in Politics and tagged 1st Amendment, Democrat propaganda, Donald Trump, Fake News, Mainstream Media, Trump War on Media. Bookmark the permalink.