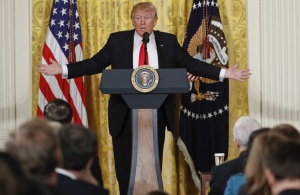 The media become unhinged trying to portray Trump as unhinged and even some FOX pundits try to pile it on higher and deeper.

Leftwing Democrat media keeps trying to say the Russians and Trump colluded to steal the election from Hillary.  Democrats have as much chance of finding this to be true as they do of finding the Missing Link proving Evolution is a fact.  If Trump’s contact with Russians is proof that he conspired with them to hack the election to take down Clinton, then Obama’s contact with the Iranians and Hamas during his campaign is proof that he allied with Islamists to renew the Jihad and give Iran nuclear weapons.  Yet the NYT continues to run stories that the Trump story might be true.  The Jihad is a real world fact.  Hillary giving Uranium to Russia and Obama passing it on to Iran before leaving office is a proven fact.  Obama’s shadow government running riots, agitators, and bureaucratic saboteurs is an in your face fact.  Reporters do not report actual facts or events anymore.  Leftwing media spreading propaganda via implication and insinuation, which is how gossip mongers spread false rumors, is bogus.  Journalism is dead in America.

Leftwing media eat their own as American journalism dies

Even on FOX, Shephard Smith angrily retorted to the president’s press conference as being laden with falsehoods such as Trump saying he had the largest Electoral College win since Reagan.  It is obvious to intelligent people that he’s talking about Republicans, but Smith acts as if Trump is claiming he had the largest in history.  Even if Bush 41 did get more votes, Reagan was still president at the time so his statement is as true as Gov. Palin saying Russia can be seen from Alaska (that leftists turned into a claim that she could see Russia from her house).  Same for Trump bringing up the leaks from the Intelligence agencies by Obama operatives releasing classified material.  This is a crime!  Trump mentioned that the media furor over the supposed Russian hack to Wikileaks of Podesta’s emails that were unclassified.  Smith pointed out that Trump complained during the campaign about classified emails being hacked, but he was talking about Hillary’s hacked server containing classified emails, not Podesta’s personal emails in the DNC that were not classified.

This is the kind of misdirection being practiced by the media against Trump.  The Donald says, contrary to media reports of chaos in his ranks, that his administration is running like a fine-tuned machine and he has gotten more done than any president before him, which is true.  But the media will not report on his successes, only on whatever they can find or invent to make him look incompetent.  Instead they report that he is insulting and in conflict with America’s Intelligence services, which is a lie.  He has a good relationship with the patriots in the agencies, but is trying to root Obama’s snakes embedded within the organizations that are working to sabotage his administration.  In addition, the media is making a mountain out of a molehill over Russia ships being off the coast of naval bases where they have been operating for the past fifty years!  There is a gazillion times more proof of voter fraud than that Russians hacked the election.  It is no wonder that the public has lost faith in the media to report accurately and honestly.

This site is my opinion only and is unpaid. I am a retired Paramedic/Firefighter with 25 years of service in the City of Dallas Fire Dept. I have a B.A. degree in Journalism, and A.A. degrees in Military Science and History. I have spent my life studying military history, world history, American history, science, current events, and politics making me a qualified PhD, Senior Fellow of the Limbaugh Institute, and tenured Professor for Advanced Conservative Studies. 😄 It is my hope that readers can gain some knowledge and wisdom from my articles.
View all posts by dustyk103 →
This entry was posted in Politics and tagged Democrat media propaganda, Donald Trump, Liberal media, Trump "unhinged", Trump Press Conference. Bookmark the permalink.