Some Republicans who are as stupid as Democrats 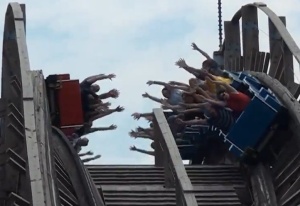 Vote for Hillary to save the GOP!  This is the kind of stupidity that NeverTrumpers are passing off as sane.  As believable as ‘Hillary is honest.’

Are you enjoying the polling roller coaster?  One day Trump is finished and will be swamped by a Hillary landslide and the next day it’s ‘God save us, Trump is winning!’  The media keeps going back and forth day to day in an attempt to work people up into a frenzy over this election.  The real question is how can over 40% of Americans be completely invested in Hillary’s corruption?  How could it be even remotely possible for Hillary Clinton to be elected president without massive voter fraud?

All Democrats can say about Trump is that he is a billionaire playboy.  They try to mock his temperament, his intelligence, and his morals, but his companies are super successful, his policies are exemplary, and he loves beautiful women – surprise.  In contrast, Hillary has personally destroyed women, takes huge sums of money from regimes that enslave women, slaughter gays, and oppress minorities, yet she claims to be their champion.  WikiLeaks has exposed her life as a river of corruption, a lifetime of sewage off of which she has gotten filthy rich, and her campaign tactics of smearing Trump to be just one more fraud in a history of frauds, and liberals eat it up.  How does all that fecal matter taste?

If the election were about the economy, criminals, and war with the Jihad then Trump is the only choice.  If it’s about character assassination and continuing Democrat corruption then it’s all Hillary.  So how does voting Hillary save anything?  All that does is to give the next ultra-corrupt Democrat the keys to the kingdom.  Democrats are the extremists that want to steal America’s wealth and they are succeeding by convincing a bunch of dumb, foolish, uneducated, self-deluded boobs that it’s all the Republican’s fault that planet Earth and the America Dream are dying.

Remember when Trump said he could shoot someone and his supporters wouldn’t desert him?  At this point Hillary could kill someone and get less negative press than Trump.  Her entire campaign is based on the claim that she is a better person than Trump.  Trump has been a real estate tycoon and entertainer who has been lauded his whole life, while Hillary has only been a corrupt lawyer and politician for hers.  Where is there even the most remote comparison?

Democrat voters don’t think government should be run as a business.  Talk about the bottomless pit of galactic stupidity!  This is the product of America’s crap educational system.  Profits are evil, money is greed, corporation is corruption, capitalism steals from the poor.  This is the kind of drivel that is indoctrinated into young skulls who know nothing of how the world works or the history of anything.

The polls are all frauds meant to shape public opinion rather than reflect it because 95% of the media are Democrat whores seeking to profit from the regime.  Just like global warming scientists who push the climate change fraud to convince fools to part from their money, the liberal media is pushing Democrats because they profit from feeding the monster and keeping their hands.  The only way Hillary can win is with massive voter fraud and the votes of illegals that Obama illegally gave citizen’s rights.  That is the only reason they can say that deep red states like Texas and Utah are in play.

How I know I’m on the “Right” side

Democrat scams sucking up your wealth for a century

This site is my opinion only and is unpaid. I am a retired Paramedic/Firefighter with 25 years of service in the City of Dallas Fire Dept. I have a B.A. degree in Journalism, and A.A. degrees in Military Science and History. I have spent my life studying military history, world history, American history, science, current events, and politics making me a qualified PhD, Senior Fellow of the Limbaugh Institute, and tenured Professor for Advanced Conservative Studies. 😄 It is my hope that readers can gain some knowledge and wisdom from my articles.
View all posts by dustyk103 →
This entry was posted in Election 2016 and tagged 2016 Presidential Campaign, America's future, Donald Trump, Hillary Clinton, Never Trump, Pollster roller coaster. Bookmark the permalink.

2 Responses to Some Republicans who are as stupid as Democrats