Algore, Cpt. Chicken Little himself, is campaigning for Hillary 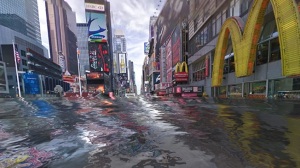 Stupid Floridians, don’t you know that your state will soon be under the ocean?

Former Vice President Al Gore, “the creator of the Internet,” Oscar winning maker of a dimumentary, and real science denier, is campaigning with Hillary Clinton in Florida.  Hillary proudly proclaims that she wants Al Gore as her climate change advisor when she becomes president.  This is just what we need with Obama shutting down coal and oil making America dependent on foreign enemies for our energy.  America will depend on the Chinese for coal to power our electricity, and if they can get fracking shut down as they wish, we will once again be dependent on Arab oil.  But don’t worry about those coal miners Hillary and Obama put out of business.  They’ll find them jobs in the green energy industry making windmills that cost taxpayers billions to make, install, and maintain.

Now is when you should take the time to go back and watch Al Gore’s Oscar winning documentary, “An Inconvenient Truth.”  The inconvenient truths you’ll discover is that he spent half the movie whining about losing the presidency to George Bush.  And when you’re done, go to his rally and ask him why the North Pole still has ice on it three years after he said “the ice cap would melt away forever?”  Ask him why there’s even more ice on it than when he made his movie?  Ask him why high tide in the Atlantic isn’t in the lobbies of South Beach hotels?

The inconvenient truth is that it’s all a fraud of the Democrat Party.  Liberal scientists who make the computer models that “predict the future” are all based on the garbage in – garbage out principle of computer programming.  They tell their models that CO2 will create heat in the atmosphere till it burns up the planet, and takes no account of the Sun when it comes to earth’s climate changes.  It’s all hype to keep these Democrat hacks flush in subsidies to dupe the ignorant.  That’s why they want “global warming deniers” persecuted.  Shades of the Gestapo!

The bottom line is that Al Gore’s Oscar is as phony and undeserved as Barack Obama’s Nobel Peace Prize.  They were both awarded on the basis of frauds.  They should both get the Bernie Madoff Prize for being world class charlatans who parting millions of fools from their money by convincing them they would save the planet.  Let this be a lesson to you when anyone claims they can predict the future.

Liberalism is founded on the assumptions of ignorance

Liberals assume most of what they believe.  They assume Donald Trump is a racist.  They assume Republicans are the KKK just because the South became Republican while the North became Democrat during the 20th century.  They don’t know any history of how Democrats were always the party of slave owners and imperial government.  They don’t know the history of how organized crime took over unions, eventually took over governments, and caused Republicans to migrate south in the Carter years.  That’s how the South became majority Republican and the North became majority Democrat.  Dinesh D’Souza’s movie, “Hillary’s America,” will open your eyes.

They assume evolution is scientific fact because there is evidence to make it a working theory.  When you don’t even know where you came from you certainly can’t understand where you’re going, which is why liberals so easily fall for Al Gore’s prognostication.  Scientists have no more clues how the climate will change in the future than they know whether or not it will rain this afternoon.  They cannot calculate the future or they’d be betting their labs on the ponies.  If they understood what the climate would be in the future then the Farmer’s Almanac would be the Bible of Climate Change.  If they could calculate future climate then they could explain the warm periods between Ice Ages, but they are ignorant of what caused them.  It certainly wasn’t a result of our car exhausts, unless they think the Flintstones used gas instead of their feet.

“Liberalism born of ignorance and bred on immorality.”

In their ignorance, liberals will discount an entire argument if one fact is not perfectly correct.  They will invent facts and declare that any who deviate from them is a liar, e.g. Trump is a racist.  Liberals are so petty that they will even attempt to nullify good sense on the basis of a typo or incorrect grammar.  It’s all a pathetic display of cave man wisdom compounded by what used to be called female logic.  Everyone is born ignorant and must be educated to learn the morality of right and wrong and about life and how the world works.  That is extremely difficult when leftists are in America’s schools indoctrinating children into lies about history, science, and their ideology.  Their propaganda will misrepresent facts, misleading their students by altering the quotes of the righteous and covering up the wickedness of leftist ideologies like socialism and Islamism that have killed and enslaved billions of people throughout history.  Trying to teach liberals the truth is like trying to force a mule to move.

The party of perversion assumes themselves to be the arbiters of morality when they are actually the dupes.  The phony scandal of Trump was simply propaganda designed to distract attention from Wikileaks’s release of Hillary’s emails proving her absolute corruption.  Just as the climate change fraud was created to part fools from their money to “save the planet,” liberal propaganda is designed to convince them Democrats are helping the little guy by stealing the wealth from the rich to fill their own wallets.  When the method of saving the world requires Americans to give up their wealth to the government, and make their energy dependent of foreigners who want to destroy us, it takes a special kind of stupid not to see what is right in front of your face. 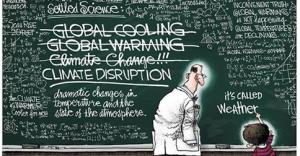 But then, liberals can’t even see the Sun that is the driver of our world’s climate.  Their world is the world of delusion, denial, duplicity, deception, dysfunctional thinking, and just plain being dumbed down as dupes for which they earn the mascot of the Democrat Party – the jack ass.  Its traits are being stupid and stubborn, while the elephant of Republicans never forgets or is so easily duped.  This is the legacy of the Left.

Obama Has Become the Greatest Conman of All Time

This site is my opinion only and is unpaid. I am a retired Paramedic/Firefighter with 25 years of service in the City of Dallas Fire Dept. I have a B.A. degree in Journalism, and A.A. degrees in Military Science and History. I have spent my life studying military history, world history, American history, science, current events, and politics making me a qualified PhD, Senior Fellow of the Limbaugh Institute, and tenured Professor Emeritus for Advanced Conservative Studies. 😄 It is my hope that readers can gain some knowledge and wisdom from my articles.
View all posts by dustyk103 →
This entry was posted in Election 2016, Fundamentals and tagged 2016 Presidential Campaign, Al Gore, Climate change, Climate change alarmists, Climate Change deniers, Donald Trump, Elections 2016, Global warming fraud, Hillary Clinton. Bookmark the permalink.

1 Response to Algore, Cpt. Chicken Little himself, is campaigning for Hillary