The Obama plan for immigration reform 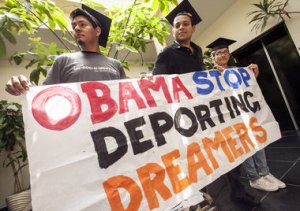 [Obama plans on using naïve youths to endorse his idea of “immigration reform” to bring millions of illegals into America to vote Democrat.  He will blame Republicans as heartless for not giving them the same rights as American citizens because “it’s only fair.”  Meanwhile, the young languish at home without jobs because illegals will work cheaper without paying taxes.]

America is a nation of immigrants who came from all over the Earth to live in the New World, to live free.  When America became a nation, we welcomed the continuous flow of immigrants.  What has changed is not that people can no longer immigrant to this country, but that many are doing so without declaring that they are here.

Illegal immigrants, unlike legal immigrants, cross the border by stealth, take jobs for pay lower even than minimum wage, and do not pay taxes as do legal immigrants who eventually become citizens.  They do so because Democrats have made taxation such an unbearable burden on the citizen with their multitude of tax laws and wasteful spending.  In addition, Democrats have focused, not on allowing businesses to create jobs, but on acquiring taxes with which to pay welfare to those who vote for them.

Convincing the ignorant young to vote Democrat by giving them money and telling them what they are doing is just and fair is what has led to the corruption of the American way of life.  This is destroying the American Dream of being able to prosper from your own effort and making a nation of spoiled rich kids dependent on the government as replacement parents.  Democrats have been transforming America from the Land of the Free into the Land of the Freeloader for the last fifty years, and taxpayers, those who choose to work for a living to try to prosper, are going to pay the price.

Every generation must fight for freedom

This site is my opinion only and is unpaid. I am a retired Paramedic/Firefighter with 25 years of service in the City of Dallas Fire Dept. I have a B.A. degree in Journalism, and A.A. degrees in Military Science and History. I have spent my life studying military history, world history, American history, science, current events, and politics making me a qualified PhD, Senior Fellow of the Limbaugh Institute, and tenured Professor for Advanced Conservative Studies. 😄 It is my hope that readers can gain some knowledge and wisdom from my articles.
View all posts by dustyk103 →
This entry was posted in Illegal Immigration. Bookmark the permalink.