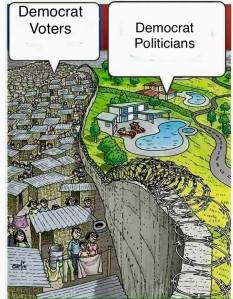 If a conservative Republican tells a liberal Democrat he has black friends they’ll curse him as a racist with an obligatory black friend who is an Oreo, which is racist in itself.  If he says he wants border security to stop people from stealing into the country taking jobs illegally he’ll be cursed as a racist who would deny people who have a right to live and work in America.  If he says he wants to stop the Democrat’s importing of cheap labor as “refugees” or Moslems who want to colonize and spread Sharia Law he’ll be cursed as a racist bigot who hates poor people.  Liberalism’s ignorance begins with the premise that America is indebted to illegals and refugees, owes them for “exploiting” their country’s resources or ruining their country with war, and that they are the “good people,” while conservatives are the bad Nazis.

The “good people” argument is a false flag.  Every demographic group consists of good people and bad people.  To give any group of human beings an unqualified seal of approval is a fraud.  There are some good people in bad groups just like there are bad people in good groups.  There are some good people in the Mafia, but not many, just as there are bad people in Christian groups, but they stay hidden.  There were Nazis that some would say are good people.  There are some KKK who are good people who fail in bigotry towards blacks, and there are blacks who are good people but fail equally in bigotry towards whites.  But if you say this to a liberal to whom everything that’s black is white and vice versa, unless they want it to be gray in their confused morality, then dare I say there are some white people who are good people?  Fanatically racist liberals would disagree – even the white ones who somehow don’t see themselves as white.  Being good is also subjective.  Eva Braun thought Hitler was a good man.  If someone says to you, “I know Mexicans (or Moslems) who are ‘good people,’” as their reason that they should be allowed to immigrate to the USA illegally, or be imported as “refugees,” that person is peddling lies.  Liberals always say they know Mexicans in the country illegally who are good people, who work hard, who obey the law, and who are deserving of citizen’s rights.  They claim the illegals are more law abiding and harder working than American citizens.  That is all 1000% FALSE!  Illegals, whether they commit violent or felony crimes or not, are all lawbreakers.  What’s more, according to FBI statistics people in the country illegally are more than twice as likely as Americans to commit violent felonies, turn to crime, domestic abuse, and rape.  Those who know Juan their law maintenance guy do not see the thousands of drug dealers and gangs that have penetrated America to set up their own criminal fiefdoms.  They may be fewer in number than Americans who engage in crime.  They may be less than black communities where young black men are encouraged to drop out of school, do drugs, and join street gangs who commit ten times more than the average citizen.  But they are far more than the vast majority of all other demographic groups.  More importantly, even those who do not lead lives of crime are still lawbreakers on multiple levels, and they continue to be lawbreakers every day, not just the day they crossed the border.  Their lawbreaking only begins at the border.  Let’s do a list.

Laws that all illegals break:

Would you like to know how many of these are felonies?  How many of you don’t pay your taxes?  Don’t register your car?  Drive without a license or insurance?  What happens to you when you don’t?  Do I need to go on?

Liberals don’t have the first clue of how many laws illegals break.  They think if they live and work in America without committing violent crimes that they are as law-abiding as good citizens.  But good citizens pay their taxes and get driver’s licenses and insurance and register their cars.  States like California give illegals driver’s licenses and allows them to vote.  Some three million illegals voted for Hillary Clinton in 2016 in California alone.  That’s what gives President Trump the right to say truthfully that he won the popular as well as the electoral vote.  Democrats may have upwards of ten million illegal votes cast every national election.  That’s why they are so vehemently defying instituting voter ID laws and purging the rolls.

The election of Obama as the first president of African descent should have been a matter of pride that brought out the best in black Americans.  Instead it brought out the worst.  That was because he was not a Republican Christian conservative who believed in the rights to life, liberty, and the pursuit of happiness through the love of Jesus, but a Democrat Moslem liberal socialist who believed in punishing white people, extorting businesses, and promoting criminals.  The Black Lives Matter movement was not an advocacy for ending racism, but a criminal advocacy group for ending police protection against black criminals under the sham of slandering police as the KKK lynching blacks.  Antifa is not a group of freedom fighters standing against fascism.  They ARE the fascists!  Democrats have been operating under the guise of righteousness for decades purporting to be the champions of the poor and oppressed.  Would these gullible dupes who vote for them be able to figure it out if they were wearing swastikas while calling Republicans “Nazis” that they are pulling the wool over their eyes?  Or do they realize what they are doing and choosing to go along with the deception?

A friend recently read to me an article about Trump and Republicans claiming he is wrongfully deporting a man who had been in the country for decades, albeit illegally, working hard, raising his family, and obeying the law according to their interpretation.  Even though this man had been breaking the law his entire life he had tried to find a way to become a citizen, but was denied.  President Trump has put forth a bill to give such people a path to citizenship, but Democrats have rejected that bill and blocked it.  Why are they doing so when that is what they have been advocating?  Why would immigration suddenly single out this man for deportation?  Because Trump sicked them on him or because Democrat operatives did so to use him as an example to create a photo op by which to damn Trump?  Democrats now say they will not accept a pathway to citizenship for these people, but will only accept giving them amnesty, free citizenship, with all the rights to work and vote thereby allowing them to push all legal immigrants who paid their dues to the back of the bus.  Rush Limbaugh proposed giving these people citizenship but no right to vote for twenty years and even that wasn’t good enough for the Democrats.  They will not accept a solution that does not give them power over and through these people.  That’s why Democrats advocate for illegals because they need a permanent underclass of people dependent on them for their survival.  That’s why they hate what Trump is doing to revive the economy.  People who are able to work and get ahead on their own are not dependent on government.  That’s why Obama measured success by how many more millions of people got on welfare, while Trump measures success by how many millions of people get jobs and can sustain themselves.

Most people want to lead good lives and America is the exceptional nation that gives everyone that opportunity.  But most people are willing to lie, cheat, and steal if they think they can get away with it.  There’s a difference between being a hard working citizen getting ahead and being a welfare parasite living off of the taxes of honest, hardworking people.  Liberals do not see this.  They scoff at American Exceptionalism because they think it means national pride.  They ridicule America because people are lacking in some way to other advanced nations.  Some are less educated, some have less health care costs, some have fewer murders.  They never compare anything honestly or even fairly, but always warp the facts to fit their propaganda.  Democrats do not do anything without attempting to advance their political agenda.  They do not have a symbiotic relationship with the people as Republicans do.  They are the quintessential parasites who subsist off of the working people by sowing misery and chaos.  They extoll their own virtues which are all frauds.  They create problems and then blame Republicans as the cause and reject all good solutions.  For example, their creation of gun free zones at schools so mass murderers can operate with impunity then saying no to allowing teachers to arm themselves.  In the history of this country Democrats have never promoted anything that made America a better place.  Everything they do has been for the benefit of the ruling elites, not the people.  I dare anyone to name anything that Democrats have done that has improved the lot of the people and I’ll bet you dollars to donuts I can prove that you are mistaken.  The only question is will you be able to comprehend it or is your mind closed?

Souls of Envy, Hearts of Hate: The Ideology of Leftist Social Liberal Democrats

This site is my opinion only and is unpaid. I am a retired Paramedic/Firefighter with 25 years of service in the City of Dallas Fire Dept. I have a B.A. degree in Journalism, and A.A. degrees in Military Science and History. I have spent my life studying military history, world history, American history, science, current events, and politics making me a qualified PhD, Senior Fellow of the Limbaugh Institute, and tenured Professor for Advanced Conservative Studies. 😄 It is my hope that readers can gain some knowledge and wisdom from my articles.
View all posts by dustyk103 →
This entry was posted in Illegal Immigration, Politics and tagged Democrat agenda, Donald Trump, Illegal Immigrant's Path to Citizenship, Illegal Immigration, Illegal Immigration Amnesty. Bookmark the permalink.