Somehow a “Nothing Burger” Comes Crashing Down on Democrat’s Heads 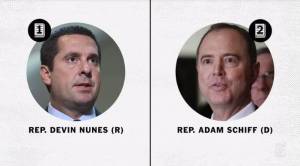 “Look, up in the sky!  It’s a bird!  It’s a plane!”  No, it’s a bolt from the blue and the sky is falling… on Democrat’s heads!  One little domino has toppled and the next one is bigger and bigger and soon all the king’s horses and all the king’s men won’t be able to get Democrats elected again.  The Left is freaking out that the memo will “destroy National Security,” “ruin people’s confidence in the FBI,” “undermine liberty.”  Then they say it’s a “nothing burger.”

Why the freak out? 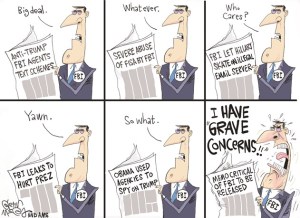 Democrats have been raging against Nunes’ memo that is nothing more than what has been known in conservative media for months.  FOX News has had multiple stories on the people and events of this bogus FISA warrant to surveille the Trump campaign.  That this is a violation ten times worse than Watergate is just the tip of the iceberg.  Rep. Adam “Shifty” Schiff (D-CA) has been railing against this memo being released as if it would destroy national security and the public’s faith in the FBI and DoJ.  So why is this the end of the world to him?  Because it makes official what liberals have been mocking and slandering as a rightwing whacko conspiracy theory.  Now America has official word from the Intelligence Committee of Congress that these Democrats are under investigation for violating the law and spying on a presidential candidate on behalf of the Democrats.  It has nothing to do with “discrediting” Mueller’s bogus investigation that has always been an obvious witch hunt with no basis in any crime.  It has everything to do with the crime of spying on the Trump campaign for Hillary Clinton by the Obama regime.

The dominoes have begun to fall and they can only get bigger.

A Conspiracy Theory with Teeth

This site is my opinion only and is unpaid. I am a retired Paramedic/Firefighter with 25 years of service in the City of Dallas Fire Dept. I have a B.A. degree in Journalism, and A.A. degrees in Military Science and History. I have spent my life studying military history, world history, American history, science, current events, and politics making me a qualified PhD, Senior Fellow of the Limbaugh Institute, and tenured Professor for Advanced Conservative Studies. 😄 It is my hope that readers can gain some knowledge and wisdom from my articles.
View all posts by dustyk103 →
This entry was posted in Politics and tagged Adam Schiff, Democrats Illegally Spy on Trump, Devon Nunes, Donald Trump, FISA Memo. Bookmark the permalink.