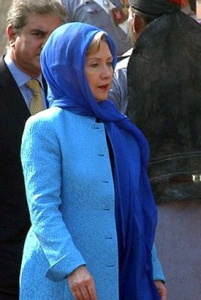 Will America go to war with Russia or with Islam?

Islam is already at war with America.  Terrorist’s mass murders, invading Europe to rape and riot, and coming to America to spread Sharia law over the Constitution are all proofs of Islamo-nazis spreading their hate around the world.  Hillary says Trump talking about working with Putin against the Jihad makes him a puppet of the Russian dictator.  But Trump points right back at Hillary whose campaign was funded by Middle Eastern potentates, invites more Moslems into America at taxpayer expense, and continues to lean on European allies to bend to Islamic will.  Hillary does the bidding of her biggest campaign contributor, the Saudis, in not calling for Europe to send the Syrian “refugees” to Saudi Arabia and the Gulf States that have massive funds but are doing nothing for their Muslim brothers fleeing war.

Obama’s fingerprints are all over these events beginning with his election:

Hillary may have won the debate on style points, but she lost on substance, and then she slipped up big at the Al Smith Dinner making a joke that if Trump bans Moslems then Obama won’t be able to go to the annual president’s photo shoot.  Obama has always claimed to be a Christian and leftists have always said we must take him at his word despite all evidence to the contrary.  They claim Obama never lies.  They try to hide Obama’s war on Christianity and aid to Islamists.  Obama has spoken nastily about Americans all his life and while in the White House, but the leftwingnut media say he and Hillary are sweetness and light.  “Teabaggers” know, Christians know, and conservatives know that the two of them hate Christians and Americans and want both to be beaten and abolished.

Hillary slips up again and admits Obama is a Moslem

Democrats are starting fights at Trump rallies and then blaming Trump supporters.  They are committing voter fraud and have been caught on hidden camera bragging about it.  It was revealed by WikiLeaks that Hillary got aid from leftwing media who fed her debate questions in advance.  Democrats can deny none of this but accuse Republicans of violating their privacy.  The Left is being exposed in this election and it is a wonder that Hillary has the support of so many millions of people – but maybe not so surprising when so many of them are illegally voting.

Record voter registration reflects the record turnout for the Republican primaries.  How Democrats, whose primaries were 30% less than four years ago, can compete can only be due to voter fraud so massive it must be uncovered.

Hillary slips up, admits Obama is a Moslem

This site is my opinion only and is unpaid. I am a retired Paramedic/Firefighter with 25 years of service in the City of Dallas Fire Dept. I have a B.A. degree in Journalism, and A.A. degrees in Military Science and History. I have spent my life studying military history, world history, American history, science, current events, and politics making me a qualified PhD, Senior Fellow of the Limbaugh Institute, and tenured Professor for Advanced Conservative Studies. 😄 It is my hope that readers can gain some knowledge and wisdom from my articles.
View all posts by dustyk103 →
This entry was posted in Election 2016 and tagged 2016 Presidential Campaign, Crooked Hillary, Democrats aid Islamists, Hillary Clinton, Hillary corruption, Islam, Islamic invasion of America, Voter fraud. Bookmark the permalink.

1 Response to Nasty Hillary says Trump is a puppet