Trump speaking to the GOP base speaks to the nation 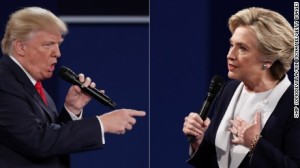 Leftwingnuts are calling Trump’s crushing debate victory “just red meat for his base.”  But speaking to the Republican base speaks to the nation of working citizens who pay taxes, not to Democrat’s criminals.  Polls meant to sway the vote are taking a beating.

The only thing Reaganesque about Donald Trump is that when he speaks to the TEA Party base of the Republicans Party about his policies; law and order, keeping America safe, closing the border to foreign invaders, crushing the Jihad that has been unleashed on the Middle East, and bringing jobs back to America rather than taxing them out with corrupt government spending, then he is speaking to ALL Americans!  Whether you are working white Middle Class watching corporations flee the country, inner city blacks watching BLM riots and murders, or Hispanic immigrants watching illegals take jobs, or Asians watching the rise of the Islamic Jihad, you want a nation where your children can grow up safely, get a good education, and a good job.  This is what Democrats have been promising them for thirty years and look at the condition of America and the world today after eight years of Democrats in power.

Donald Trump delivered in the second debate with Hillary Clinton in spades (the trump card)!  While Hillary brought the campaign down into the sewers with the tape of The Donald’s locker room talk from a decade ago, she claimed she stood on the high ground defending her husband’s sexual assaults.  It was an exhibition in duplicity on a scale with Obama claiming to be Christian while demanding Christians pay for killing babies in the womb and endorsing Islam.  Which is worse; Democrats continuing to claim that their global warming scam is real science, or the GOP going belly up over man talk and abandoning Trump?

As Hillary tries to point at Trump as a misogynist, Wikileaks keeps unleashing torrents of proof that Hillary is as two-faced as Obama.  She says there politicians have two personas; the one they show the public and the one they show their donors.  It is the donors to whom they tell the truth, but they tell the ignorant people what they want to hear.  Hillary vows to keep up the corrupt Washington payouts to the rich who donate to Democrats while just giving lip service to the fools who vote for her.

Despite all the claims that Trump is a liar, moral people realize that the leftwingnut media smears of Trump and cover-ups for Hillary reveals the Clinton has a forked tongue.  When Trump’s denial of being the racist liberals label him as is recorded as a lie based on their interpretation of racism, then you know there is nothing they say that can be trusted.  It’s like believing their interpretation of climate change science as fact rather than the fiction it has proven to be.  Obama and Clinton have led the nation and the world into the next world war thanks to their deliberate deterioration of America’s economic and military strength.

In 2nd Debate Trump bats 1000 and Hillary Zero in Credibility

In the words of one citizen;

“There’s emails, which is National Security, and then there’s somebody’s ‘potty mouth,’ and I’m more concerned about the issues, about our security, than I am about what somebody says that is ‘inappropriate.’”

Morality Wars of Trump and Clinton

This site is my opinion only and is unpaid. I am a retired Paramedic/Firefighter with 25 years of service in the City of Dallas Fire Dept. I have a B.A. degree in Journalism, and A.A. degrees in Military Science and History. I have spent my life studying military history, world history, American history, science, current events, and politics making me a qualified PhD, Senior Fellow of the Limbaugh Institute, and tenured Professor for Advanced Conservative Studies. 😄 It is my hope that readers can gain some knowledge and wisdom from my articles.
View all posts by dustyk103 →
This entry was posted in Election 2016 and tagged 2016 Presidential Campaign, Campaign mudslinging, Clinton policies, Donald Trump, Elections 2016, Hillary Clinton, Presidential debates 2016, Trump policies. Bookmark the permalink.